When a fracking mishap accidentally rips apart the earth's crust, the resulting hole opens up a gaping underground waterway leading to a vast and mysterious subterranean ocean somewhere deep below. Instantly, giant prehistoric sharks begin wending their way upward toward a murky bog in the heart of the Arkansas bayou. Unfortunately for a group of female prisoners on a work detail in the swamp, the deadly sharks attack without warning – pinning a hapless group of potential victims in a small deserted cabin in the heart of the wetlands. For these wayward women, death may be the only means of escape!

Get ready for a wild ride when Dominque Swain (Skin Traffik, Alpha Dog) and Traci Lords (Cry Baby, Not of this Earth) come face to face with the deadliest prehistoric man-eaters nature has ever spawned.

"Crap on a cracker!"

I've written previously about the importance of a title and the implications that it has. A title needs to tell the audience what the movie is in just a couple words without giving away the entire story. That said, the film in question should also deliver on the premise set forth by the title. As someone who appreciates schlocky movies and celebrates the vast catalogue of films that were either directed by or produced by Roger Corman, I often willingly subject myself to some pretty bad movies all in the name of good dumb fun. So when I heard of a movie titled 'Sharkansas Women's Prison Massacre,' I naturally got a little excited because of the terrible cheesiness that was all but guaranteed.  Unfortunately, even with the tantalizing star power of Dominique Swain and Traci Lords, the final product doesn't even come close to hitting the mark.

Deep within the swamps of Arkansas a fracking crew blasts too deep and opens up an underground ocean teeming with prehistoric life. Rising from the depths is the dreaded Sharkasauras, a shark capable of swimming underwater and underground! This spells bad news for Prison Guard Carl (John Callahan), his partner, and the crew of women prisoners who are tasked with removing some stumps out in the middle of the Arkansas swamps. When Honey (Dominique Swain) breaks her lover Anita (Cindy Lucas) out of the work detail, the only thing keeping them freedom are the bloodthirsty sharks swimming around the swamps.  At the same time, Detective Kendra Patterson (Traci Lords) and her partner Detective Adam Levine (Corey Landis) are on the trail of a band of bank robbers who fled out into the swamps. As the body count rises, the once scenic and pristine Arkansas rivers will become the bloody killing grounds for a monster no one has ever seen before.

I'm going to cut to the chase with this one, 'Sharkansas Women's Prison Massacre' was a really bad movie. Granted, with a title like that I was virtually guaranteed something that would be a difficult slog, but I had hoped that I was going to be enjoying something of a 'Sharknado 3' "quality." I didn't expect art, I wasn't even expecting smart, but I was hoping at the very least to get a movie that was at least clever. This movie isn't even clever, it's just stupid. I was 100% on board with the idea of a shark or two who could survive the fresh waters of the Arkansas swamp rivers. That's fine, I'm all game for that. But when characters do the logical thing and move inland, the sharks somehow become the graboids from 'Tremors' and are able to "swim" under the ground. 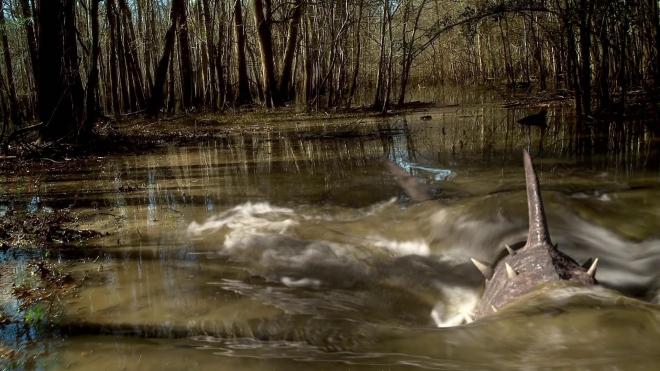 Compounding that pain is the absolutely terrible acting. Again, I wasn't expecting oscar caliber performances or anything, but some level of conviction goes a long way. The entire cast from Traci Lords to Dominique Swain are all in on the joke so nothing is funny or even entertaining, it's just painful and stinks of desperation. So with a movie that has absolutely terrible acting and a plot that is a true stinker, the gore effects could be a savior, right? Wrong. Virtually all of the gore seen on screen is digital or a rubber appendage from a Halloween shop. Even when Traci Lords' Detective Patterson and her partner come across the bodies of the bank robbers, the grotesquery on display is poor digital art. Even the fake blood used looks like they got the red dye and corn syrup mixture wrong.

I've seen a huge number of bad movies in my day, many of them I've written about for High-Def Digest, but I think this one takes the cake as the worst I've had to review. It's bland, boring, unfunny, and worst of all: not in the least bit entertaining. And this isn't a case of setting expectations too high, with a name like 'Sharkansas Woken's Prison Massacre,' expectations were already pretty low. I was hoping with a cast that featured Traci Lords and Dominique Swain there would at least be some sort of entertainment value to be found, but there isn't. Lords is flat and boring stuck with a character who is inconsequential to the rest of the movie. Swain, on the other hand, her frequently used "Crap on a cracker!" catchphrase at least provides an apt description of what I sat through for 83 minutes.

'Sharkansas Women's Prison Massacre' arrives on Blu-ray thanks to Scream Factory. The film is pressed onto a Region A locked BD25 disc and is housed in a standard Blu-ray case. The Disc opens to a static image main menu with standard navigation options.

'Sharkansas Women's Prison Massacre' arrives with a 1080p 1.78:1 Transfer. Shot digitally, the movie often features soft edges and appears rather flat in several places. Detail is apparent whenever there is a well-lit location or outdoor set piece, but the movie's production design is so lackluster there just really isn't much to see. However, details are sharp enough that it's easy to see that all of the guns for this movie were toys with their barrels capped and painted black so that counts for something I guess. Colors are natural looking enough, but there wasn't a lot of effort made for color correction as adjoining scenes can feature shifting flesh tones where one shot an actor looks tan and healthy and another angle will make them appear pinkish. Black levels are also hit and miss as there are a few instances of crush and the image itself can appear flat without any real dimension.

Even with a DTS-HD MA 5.1 mix, there just isn't a whole lot of life and presence with this audio track. For starters, the surround elements are virtually DOA with only a few moments here or there of any surround elements. Most of the surround space is used up by the score from Chuck Cirino. Dialogue is clean and easy to hear, but again, it sounds almost canned and lifeless. Sound effects also have an unnatural tinny quality to them that just sound unappealing. Levels are set well enough as there isn't any need to adjust volume during the show. Also included on this disc is a DTS-HD MA 2.0 track. This track probably has a little more balance to it, but it is pretty flat feeling. The 5.1 mix gives the movie a little more oomph so that's probably going to be the one to go with.

Audio Commentary: Director and Co-writer Jim Wynorski and actresses Cindy Lucas and Amy Holt provide a fun commentary. The trio obviously had a good time making this movie and had good intentions towards wanting to entertain an audience with their silliness.

It's possible that I just missed the humor, but I found very little entertainment value in 'Sharkansas Women's Prison Massacre.' It just wasn't my movie. Scream Factory has brought this flick to Blu-ray in decent order with a fair A/V transfer and an interesting commentary track to round out the extras. I had hopes for this movie but it just didn't deliver the goods for me. If you're curious, this Blu-ray release of 'Sharkansas Women's Prison Massacre' is a rental, otherwise, it's a safe one to skip entirely.

Sale Price 9.31
Buy Now
3rd Party 9.31
In Stock.
See what people are saying about this story or others
See Comments in Forum
Previous Next
Pre-Orders
Tomorrow's latest releases