Newly re-mastered in HD! During World War II, a brave Basque mountaineer (Anthony Quinn, Across 110th Street) tries to smuggle a French scientist, Prof John Bergson (James Mason, The Destructors) and his family over the dangerous Pyrenees Mountains to neutral Spain while being pursued by a group of Nazis, led by a relentless and brutal German SS officer (Malcolm McDowell, Figures in a Landscape). Directed by J. Lee Thompson, the director of the World War II masterpiece, The Guns of Navarone; made this tense thrilling wartime adventure of a family s desperate and perilous escape to freedom. The sterling cast includes Patricia Neal (Hud), Kay Lenz (White Line Fever), Michael Lonsdale (Moonraker), Robert Brown (Octopussy) and the great Christopher Lee (The Oblong Box).

You gotta love a good World War II action thriller. When I was growing up, it didn't get much better than 'Where Eagles Dare' with my dad. I have wonderfully vivid memories of watching 'Night Train to Munich' with my grandfather not long before he passed away and the both of us getting caught up in that final gondola shootout. So when I discover a new WWII thriller I tend to get a little extra excited because a wave of nostalgic memories come flooding up to the surface. When I sat down to view 1979's 'The Passage' directed by J. Lee Thompson starring Anthony Quinn, James Mason, Christopher Lee, and Malcolm McDowell, I was understandably excited to see what this impressive array of talent could bring. Unfortunately, the film's front end is a confusing mess that ultimately undercuts the solid action and suspense the last half of the film brings.

The Basque (Anthony Quinn) is a simple man who just wants to be left alone to tend to his sheep. He doesn't care about the Nazi's, the war, or anyone else for that matter because they hold no bearing on his life. Things would have stayed that way had the resistance under the leadership of Alain Renoudot (Michael Lonsdale) not needed his help. The Basque knows the Pyrenees mountains better than anyone alive - especially in the winter, when the most obvious trails are covered with snow and impassible. What they need the Basque to do is help get a german scientist by the name of Professor John Bergson (James Mason) and his family out of Nazi-held territories. Professor Bergson isn't just some intellectual or a dissonant voice, he's the backbone of the Nazi's secret weapons development division. Because Bergson is of such importance, the Nazi's have sent their best man, the sadistic Captain Berkow to recapture the scientist. As the Basque does what he can to ensure Professor Bergson stays on the move and out of Nazi hands, Captain Berkow is ready and willing to use any method necessary to capture his prey and permanently squash out the resistance movement.

'The Passage' is a WWII thriller that really should be a lot better than it is. It isn't the acting or the direction or even the pacing that is the problem of this film - it's the editing. 'The Passage' feels like at least twenty to thirty minutes of the front of the film was cut out. While I wouldn't normally begrudge a film for wanting to move things forward and get to the suspense building and action, but in this case, it proves to be a real problem. On the basest of levels, the film sacrifices character introductions and motivations. I'm not lying when I say that some characters aren't even given names when they probably would have. 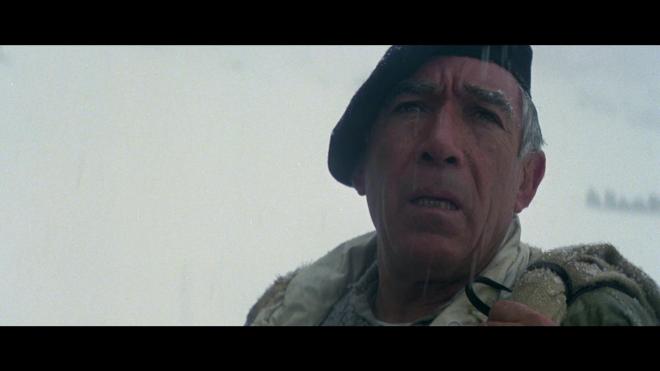 The editing woes continue as the film will frequently cut into a conversation that was already in progress like when an emergency news bulletin cuts into your favorite show. Just when you feel like you may be getting a sense of who someone is or why they're doing what they're doing, a cut comes in and we lose all focus and momentum as the film would rather pay attention to an action scene. Because there has been little to no setup for some of these scenes, there is little to no suspense or weight to the moment.

'That Passage' looks like a pristine, top-tier WWII film featuring an all-star cast and is loaded with beautiful scenery and amazing production values. The central cast of Anthony Quinn, James Mason, and Malcolm McDowell are all there and giving strong performances. I've never thought of Antony Quinn as much of a tough guy but the few times he's been given the opportunity to he delivers and his portrayal of the Basque is no exception. He's a man who wants to live in peace and quiet but he soon realizes that even if he hadn't taken on this job it wouldn't have been a possibility so his actions have a purpose. On he flip side of the coin is Malcolm McDowell who is content with being a hammy stereotype Nazi psychopath. This would normally be a problem, but McDowell is so much fun that he ends up standing out as one of the better aspects of the movie. All in all, this isn't a terrible movie, but it's very easy to see how great it could have been if the film hadn't been edited with a chainsaw.

'The Passage' arrives on Blu-ray thanks to Kino Lorber and is pressed onto a Region A locked BD50 disc. Housed in a standard Blu-ray case, the disc opens directly to a static image main menu featuring traditional navigation options.

Even though this 2.35:1 1080p transfer was apparently sourced from a new HD scan performed in 2015, the image still has some issues keeping it from being a better than average catalogue release. The primary issue is that this film appears overly dim and dark forcing colors to appear very drab and lifeless. Even scenes that are clearly daylight sequences featuring what should be bright white snow often look dark and the snow appearing almost a grayish color. Primaries never really come alive and flesh tones tend to appear pasty and sickly. While this does fit in with the thematic tone of the film, it still feels unnatural. The source for this transfer also has seen better days as there are numerous nicks and scratches with persistent speckling. Also worth mentioning at around the 85-minute mark the film is suddenly squeezed and stretched for no apparent reason. The anomaly goes away after about a minute but it's pretty distracting to say the least. On the plus side of things, film grain appears throughout leading to some nice detail levels, especially with the period costuming and the set design work. The film also has a strong sense of depth to it which makes a number of the mountainous establishing shots all the more impressive.

'The Passage' comes with a passable DTS-HD MA 2.0 audio track that just doesn't have a whole lot of life to it. Part of the problem is the very obvious use of ADR to loop in lines during post-production. This is a normal process of filmmaking, but for this track, it tends to stand out like when a line sounds even and conversational and the next word or two suddenly changes pitch. It almost sounds like the dubbing that happens for movies being shown on television to remove any curse words. You can at least clearly hear what is being said throughout the film, but the noticeable changes in the voices are a bit jarring. The track also exhibits some age-related issues with some pops happening here and there and some steady hiss. As a result, the track struggles to maintain a sense of atmosphere. It's not a terrible track, but like the image transfer, it could use a little more TLC.

Interview with Malcolm McDowell: (HD 29:09) McDowell provides a heck of a great interview. While he doesn't exactly have the fondest of things to say about the movie itself, he appears to have enjoyed making the movie. He offers up tons of stories and material about the production and what it was like working with actors like James Mason and Christopher Lee.

Interview with Paul Clemens: (HD 33:20) If you want some great stories about Malcolm McDowell, this interview with Clemens should fit the bill. He was apparently a huge fan of 'A Clockwork Orange' and has a lot of great stories about working with McDowell as well as Anthony Quinn. Like McDowell, he doesn't seem to love the film but loved making it.

Alternate Ending: (HD 6:19) This is a rather bizarre version of the ending that honestly just doesn't work. The one used for the actual theatrical release is a lot stronger and makes more sense.

'The Passage' is a tough movie to get through at the start because it's incredibly confusing who anyone is or why they're doing what they're doing. Once the flick evens out and the film settles into its action set pieces it finds its focus and improves a great deal. The cast is strong and does a great deal to making the film a worthwhile viewing. Kino Lorber has brought the film to Blu-ray featuring a middling A/V presentation that is hampered by age-related issues, but the extra features interviews with two of the actors are interesting, fun, and informative. 'The Passage' is worth a look. It may not be a great movie but it's watchable fun.

Sale Price 89.95
Buy Now
3rd Party 89.95
In Stock.
See what people are saying about this story or others
See Comments in Forum
Previous Next
Pre-Orders
Tomorrow's latest releases