Pride and Prejudice and Zombies

Pride And Prejudice And Zombies is a fresh twist on Jane Austen's widely celebrated novel. A mysterious plague has fallen upon 19th century England, the land is overrun with the undead and feisty heroine Elizabeth Bennet is a master of martial arts and weaponry. Casting aside personal and social prejudices, Elizabeth and Mr. Darcy must unite on the blood-soaked battlefield to rid the country of the zombie menace and discover their true love for one another.

Amid the gory bloodshed, the sudden, unexpected frenzied bursts of violence and the impending threat of the apocalypse, 'Pride and Prejudice and Zombies' dares to ask a critically important question. Can the social order and class system survive a zombie outbreak? Silly as that may sound, the makers of this adaptation of the book by Seth Grahame-Smith — which itself is a reimagining of Jane Austen's classic novel of manners — don't shy away from this theme. In fact, characters openly and even brazenly talk about it. This is particularly true in the ridiculously polite tit-for-tat squabbles of our two main heroes and eventual sweethearts, Colonel Darcy (an intentionally stiff and arrogantly snobbish Sam Riley) and Elizabeth Bennet (a very meek and humble Lily James). At a dinner party, he boldly proclaims a woman is more attractive when mastering the feminine arts rather than combat skills, and Elizabeth answers soon after with her knowledge of Sun Tzu's The Art of War. The two go back and forth for a good chunk of the runtime until words are exchanged for fists, the tension suddenly erupting into a hand-to-hand conflict about halfway through the movie where they discover to be equals.

As entertaining as that fight sequence is on its own — a dazzling choreography that would feel as comfortable and natural in, say, a Jason Bourne film — the brawl is accentuated by a very dry sense of humor. With tongue firmly pressed against the cheek, the pair sling words and insults as swiftly as they swing punches and kicks, a verbal contest of wit matched only by the speed of each blow. They reveal as much about their feelings towards each other as they do their ability to handle themselves against the zombie horde. And the whole thing is intended for laughs, a series of deadpan performances that metaphorically speak to Austen's novel and the stifling pressure of cultural norms undermining a character's ability to express themselves. It's made all the more apparent when Matt Smith shows up as the overtly prim and proper Parson Collins, a minister with intentions of marrying Elizabeth. Or any of the other sisters, for that matter. Admittedly, Smith also runs the risk of ruining much of the film's straight-faced comedy in a couple spots, but then again, his presence reminds viewers to not take anything too serious or at face value. 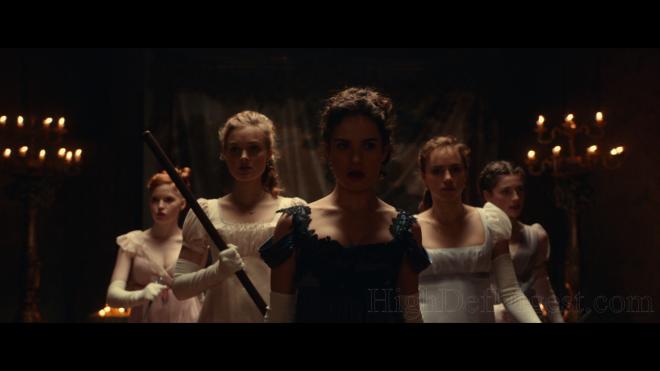 Director Burr Steers, who also wrote the script, does excellent with the laconic language of early 19th Century aristocracy. Although the conversations appear authentic and quite romanticized, there is still something humorously ridiculous and exaggeratingly formal about the way each interacts with the other. Whether it's with the Bennet sisters sparring or Lady Catherine de Bourgh (Lena Headey), Darcy's aunt, discussing Elizabeth's intentions with her already betrothed nephew, there is a subversive snideness lurking beneath the seemingly cultured and refined tête-à-tête. When the charming and exceedingly polite Wickham (Jack Huston) makes his appearance, the character ironically speaks with a more straightforward and blunt demeanor. But this is part of his character trait, for him to more easily prowl the social circles of the upper class undetected or be more readily accepted, winning Elizabeth's trust without much effort. His real purpose is part of a larger reveal that will not be ruined here, but it's another great bit of comedy that remains true to Austen's original design while still feeling fresh and new.

For many, 'Pride and Prejudice and Zombies' will be a muddling mashup of classic literature and today's current undead craze that misses its mark and fails to satisfy, as can be seen by box-office returns and critical responses. And to some extent, those viewers make a point because admittedly, some jokes don't really have much of a bite and others are not quite as infectious. However, for those who can appreciate the mix of dry wit with stylized action and gore will be pleasantly surprised with this concoction of straight-faced absurdity. Honestly, I rather admire the filmmakers' approach to the source with deadpan humor. In a time, when many over-the-top comedies are self-referential as part of the gag, which is not a wholly bad thing, it's somewhat refreshing to have a production fully embrace the material for what it is and ride unabashedly towards the zombie apocalypse at full throttle. Like the scene when Darcy and Mr. Bingley (Douglas Booth) first witness the Bennet sisters confidently vanquish a swarm of the walking dead crashing a formal ball, you will stand in puzzled awe at the well-mannered carnage, but give the young ladies some time to charm their way into your heart.

Sony Pictures Home Entertainment brings 'Pride and Prejudice and Zombies' to Blu-ray on a Region Free, BD50 disc housed inside a blue, eco-elite case with a flyer, a code for an UltraViolet Digital Copy. After several skippable trailers at startup, viewers are taken to a static menu screen with the standard set of options along the bottom and music in the background.

The Bennet sisters defy the social order while wiping the floor with the bloody goo of zombies thanks to a near-reference and outstanding 1080p/AVC MPEG-4 encode. Worth noting, the horror comedy rises from the grave with heavily stylized photography by the talented Remi Adefarasin, showing several intentionally soft moments and a somewhat restrained appeal, making for an interesting watch. The overall video displays sharp definition and clarity throughout, exposing the ornate embroidery and unique design of the costumes. Darcy's leather jacket, the elaborate patterns in his dark clothing and all the other flowery dresses are revealing with strong textural realism. The tiniest blemish, freckle, pore and wrinkle is made plainly visible while the tiny pits and imperfections in stone blocks of the buildings is discernible. Sadly, poorly-lit sequences, such as when the sisters are sparring in the basement, are not the strongest with the darkest portions of the frame looking pretty murky and a tad dull.

Presented in a 2.40:1 aspect ratio, the freshly-minted transfer debuts with spot-on contrast, allowing for excellent visibility into the far distance with several beautiful moments of the English countryside. Brightness levels are equally superb, displaying full-bodied blacks with often exceptional gradational details in the dark clothes and during outside nighttime sequences, providing the image with good dimensionality. The digital photography comes with a deliberately subdued tone that matches the story's horror elements, creating a noticeably dreary, overcast appeal. However, the overall palette displays a sumptuous array of richly saturated primaries that make the visuals come to life, from the deep red blood and soldier jackets to the vivid greens in the surrounding foliage. The other pastel hues remain first-rate and accurately rendered, energizing every scene with warmth and keeping things in high spirits.

The zombies roam free in the outskirts of the In-Between with a mostly excellent DTS-HD Master Audio soundtrack that, while nicely complementing the mix of horror action and comedy, reveals a couple troubling issues worth noting. To start with, the movie makes abrupt jumps from scenes of quiet conversations to sudden bursts of action, which is pretty jarring and near annoying on its own. Worse still, those same moments are very bright and ear-piercing, revealing hints of mild distortion and some noticeable clipping. The hitch-pitched action also tends to overpower other bits of dialogue, forcing viewers to strain at what characters are saying while also stumbling in the dark for the remote. Basically, the track can, at times, be too loud and deafening for its own good.

On the plus side, the front soundstage comes with a wide and spacious sense of presence with plenty of warmth and fidelity, littered with lots of good, pleasing background activity. When things are a bit calmer and focused on character interactions, imaging exhibits a stronger, more appreciable mid-range and excellent separation across all three channels and convincing off-screen effects. Fernando Velázquez's score not only displays clean distinction in the instrumentation, but it subtly bleeds to the side speakers. Most impressive is a surprisingly authoritative and strikingly powerful low-end that gives every gunshot, explosion and action sequence an awesome palpable weight, and there are a couple wall-rattling ultra-low moments that really dig deep into the lower depths (bass chart). Although the zombie chaos and bloody mayhem tends to drown out some of the dialogue, vocals are nicely well-prioritized.

While a good chunk of the runtime is front-heavy, the surrounds are employed on several occasions, aside from those absurdly loud sequences. Directional cues flawlessly pan from one speaker to the next, sucking the listener into the middle of the action. Action scenes fill the room with debris flying all around while convincingly landing in the sides and rears. Quieter moments come with ambient effects that subtly spread everywhere, like crows squawking in the sky, flies buzzing all around or the echo of voices resonating with realism. On the whole, the design makes for an immersive and engaging soundfield, but those aforementioned, overly loud segments bring the overall quality down a couple notches.

As a side note, the subtitles are not CIH friendly.

'Pride and Prejudice and Zombies' is a silly horror comedy that will very likely put off many with its deadpan humor. A few bits of dialogue hint at the story's sillier aspects, with Matt Smith's performance practically giving away the joke, but the premise alone of reimagining the themes of a beloved classic novel reinforced by an impending zombie apocalypse should be more than enough to entertain.

Though the heavily stylized photography keeps the video from truly shining, the Blu-ray arrives with a near-reference picture quality that's sure to please, but the audio quality, though strong and fairly satisfying, comes with a couple trouble areas worth considering. The bonus collection is a fairly light affair, but the featurettes are amusing and enlightening nonetheless, making the overall package worth a look for fans and the curious alike.

Sale Price 9.99
List Price 14.99
Buy Now
3rd Party 5.76
In Stock.
See what people are saying about this story or others
See Comments in Forum
Previous Next
Pre-Orders
Tomorrow's latest releases