Take off you hosers… to the Great White North! What matters most in life: Hockey, donuts, back bacon and beer! Especially beer. Brothers Bob and Doug McKenzie of the Canadian Great White North keep the suds flowing as they upend the diabolical mind-controlling scheme of Brewmeister Smith. Beauty, eh?

"This movie was shot in 3-B, three beers and it looks good, eh?"

Every now and again, it's just great to sit back and enjoy something silly. Movies like 'Dumb and Dumber' and 'Cheech & Chong' or the 'Wayne's World' movies are meant to turn your brain off and just make you laugh. While on the surface these movies may seem stupid or idiotic with extremely thin plots, they also work as fantastic satires and prove to be incredibly clever ventures that showcase the natural talents of their primary cast. SCTV beer enthusiast brothers Bob and Doug McKenzie played by the always hilarious Rick Moranis and Dave Thomas made the leap from TV screens to the silver screen with 'Strange Brew.' The movie's plot may not make a whole lot of sense, but it doesn't need to when you have these two hosers on screen!

Bob (Rick Moranis) and Doug (Dave Thomas) have finally made it big, they're on the big screen in their own cinematic adventure. Unfortunately, the screening doesn't go well and the boys are hounded by fans and are in need of beer money after they gave a father and his two crying kids a refund. That refund cash was supposed to buy a case of beer for their angry father. Without any money and armed with only a couple of jelly donuts, they concoct a scheme to get some free beer from the Elsinore brewery.

Once they get to the brewery, the bumbling brothers inadvertently wind up in the middle of a plot for world domination! For years, the evil Brewmeister Smith (Max von Sydow) has been testing mind control drugs and lacing beer with them. After killing the owner of Elsinore Beer and supplanting his brother Claude Elsinore (Paul Dooley) as head of the company, the only thing standing in the way of Smith's diabolical plot to take control of the world by giving away the tainted beer for free during Oktoberfest is the heiress Pam Elsinore (Lynne Griffin) and Bog and Doug - even though the latter two have no idea what's going on because the only thing on their minds is finding a couple of cold ones. 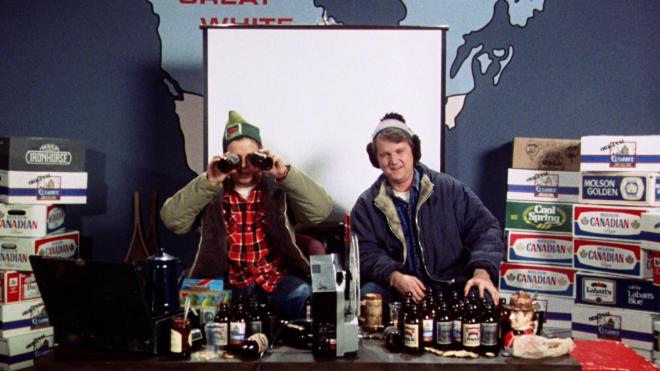 If you're coming into 'Strange Brew' looking for sharp plotting and well-written characters with strong dialogue, you're not going to find it here. Instead, what you're going to find is perhaps the funniest productions of Shakespeare's 'Hamlet' you'll ever see! Essentially all of the plot beats of an heiress taking on her uncle for killing her father and marrying her mother falls in line with the main plot. Even the location of Elsinore Brewery is a nod to the Bard's original work. That essentially leaves the knuckleheaded characters of Bob and Doug McKenzie to fill in as Rosencrantz and Guildenstern. Unlike their literary counterparts, Bob and Doug are virtually incapable of dying. As Max von Sydow tries his best to kill the pair, even going so far as to cut the breaks on their van and send them into the river, the brothers somehow always manage to escape death - especially if there are a couple empty beer bottles laying around!

Written and directed by Rick Moranis and Dave Thomas, this film is a wild and crazy adventure. It's certainly an absurdist comedy you're going to have to just give yourself over to in order to fully enjoy, but once you do, you should have a dynamite time. I blame my sister for turning me into a fan of this movie. I have fond memories of trying to find a movie to buy at Suncoast Video in our local mall and she basically forced me to spend my money on this movie on VHS. I don't remember what I wanted to get instead, it doesn't matter anymore because this movie has entertained me for hours and hours over the last twenty years. While on the surface it may seem stupid, it's also incredibly clever and shows the comedic range of Rick Moranis and Dave Thomas. There are so many subtle moments throughout where if you're not outright laughing your head off, you're giving the film an earnest chuckle because you get the layered humor they're bringing to the screen. I can understand this one not being everyone's brand of pilsner, some folks just like a stout, but if you've never seen 'Strange Brew' you owe it to yourself to give it a try.

'Strange Brew' arrives on Blu-ray thanks to Warner Brothers and is pressed onto a Region A BD50 disc. Housed in an eco-friendly Blu-ray case, the disc loads directly to a static image main menu with standard navigation options.

With a fresh-looking 1.85:1 1080p transfer, 'Strange Brew' makes a nice leap to High Definition with this Blu-ray release. The first thing that struck me as a huge improvement over the previous DVD release was the color saturation. Primaries are rich and vibrant allowing blues, reds, and golden tones to leap off the screen in ways I hadn't enjoyed previously. Considering this film was shot in the late fall and early winter in Toronto, the film has always had a rather grey and drab-looking appearance to it, but now colors are allowed to shine through the haziness while retaining that cold, wet, rainy look it always had. Film grain is apparent, but stable, allowing for fine details to appear on the screen. Fine facial features come through nicely as do clothing textures. Black levels are intermittently very strong and sometimes problematic. Some scenes allow for plenty of shadow separation and give a sense of depth to the image while a few in Brewmeister Smith's lab can leave Max von Sydow looking like a floating head and hands. Not a terrible issue but worth mentioning. The print sourced for this transfer appears clean and free of any damage or dirt making this a solid transfer overall.

'Strange Brew' arrives with a solid English DTS-HD MA 2.0 stereo mix, which serves this movie just fine. This isn't a movie that features a lot of complicated effects or action scenes to warrant a full surround mix, so this keeps to the dialogue nature of the flick nicely. Dialogue is front and center throughout the film and is never difficult to hear or understand. Sound effects, dialogue, and the score by Charles Fox have plenty of room to sound natural. Some of the sound effects are kicked up a notch or two but that's to serve the comedic tone of the scene. Levels are spot on as this is largely a quiet movie save for a few scenes here and there where some action picks up. All around this is a solid track. It doesn't blow your hair back but it gets the job done in fine form.

The Animated Adventures of Bob and Doug McKenzie: (SD 4:47) This is just a short preview of the short-lived 2003 animated series. It's okay, not as sharp as the original show, but it has a couple good gags in it.

Classic McKenzie Brothers Sketch from SCTV: (SD 2:23) This is a fun sketch and makes me remember when I was a kid and we had our TV antenna perfectly tuned so we could pull in some stations from Windsor, Ontario and I got to catch a few SCTV reruns.

'Strange Brew' remains one of my favorite movies from my formative years. It's a movie that I only pull out every couple of years or so because I never want it to get too old or stale. Thankfully that hasn't happened yet, and this Blu-ray release of 'Strange Brew' shows how well the movie has held up all these years later. Warner Brothers has given the film a fine HD upgrade with a strong A/V presentation and a couple okay extras. Fans of the film shouldn't hesitate in making a purchase. If you've never seen it, consider 'Strange Brew' recommended.

Sale Price 8.35
List Price 12.97
Buy Now
3rd Party 8.35
In Stock.
See what people are saying about this story or others
See Comments in Forum
Previous Next
Pre-Orders
Tomorrow's latest releases