Independent claims specialist Naomi is given the job of recovering stolen diamonds... no matter what it takes. Also on the trail of the diamonds is police officer Khalil. The investigation takes them across Europe and into a world where shadowy figures control events.

Sometimes, you can get too much of a good thing. Some movies or TV shows don't last long enough, others last far too long. Finding that balance between telling a story naturally and organically and padding one out beyond its welcome is difficult to pinpoint. When a show runs too long, you just feel it in your bones. When you start to ask "why am I even seeing this?" you know the show is taking the long route to go a short distance. Unfortunately, an extended runtime is exactly what plagues 'The Last Panthers.' At just over 5 hours in length, the show is easily an hour longer than necessary for what should have been a smooth and gritty international thriller.

The Pink Panthers were once the most successful and feared diamond thieves in all of Europe. They would strike out of nowhere, take what they wanted, and get out before the police could even respond. After a series of daring heists, the group went dark. Nothing was heard from them, no more heists, no more brazen robberies. Ten years later the group turns up under the leadership of Milan Celik (Goran Bogdan). The heist was damn near perfect. The group walks into a high-end diamond exchange in Marseille, rips off hundreds of millions worth of rare flawless diamonds, and head for the hills. The only problem is the escape didn't go as planned. As the group attempted to flee, one of them accidentally kills a small girl who got caught in the crossfire.

Now with the death of a child on their heads, a young hotshot Interpol agent Khalil Rachedi (Tahar Rahim) is committed to bringing the thieves to justice and see the death of the little girl avenged. At the same time, Naomi Franckom (Samantha Morton), a committed insurance investigator is also in pursuit of Celik and his crew. With the help of her mentor Tom Kendle (John Hurt), Naomi will have to work fast to out-maneuver agent Rachedi if she hopes to recover the diamonds for her client. While both investigators ultimately want the same thing, the pair will use any method at their disposal to get the job done. As the investigation proceeds, they'll have to chase their targets to the ends of the earth and back. 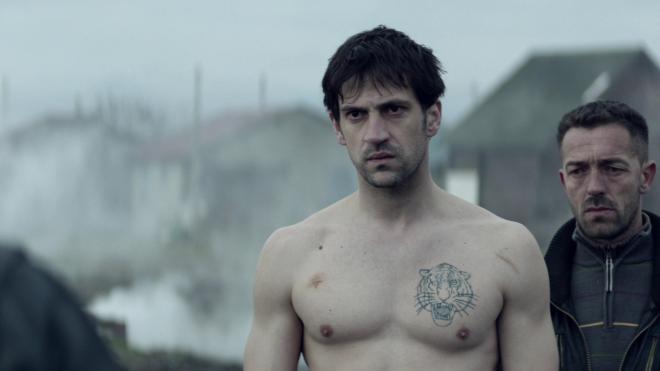 'The Last Panthers' starts out in amazing fashion with a tense and exciting heist. The thieves are organized, ready, and able to pull off a daring daylight robbery without fear of police intervention. When the police do arrive, the thieves are ready for them. When the escape goes bad and one of the thieves accidentally kills a child, the stakes are raised even higher and you feel a rush of potential suspense and drama. Now the thieves are being hunted instead of being merely pursued. On the flip side, the thieves are now in a bad position of not being able to sell their diamonds. What was once worth hundreds of millions of Euros is now worth pennies because no fence wants to be a part of murder by being caught with those diamonds. Add in dueling investigators with their own personal motivations, and 'The Last Panthers' is set up to be one hell of an exciting miniseries event.

So where does it all go wrong? Somewhere around the first nonsensical flashback of Samantha Morton's Naomi as a former U.N. peacekeeper in Bosnia is about when the series starts to slowly press on the brakes. With a series of this sort, you naturally expect to get a little bit of backstory from some of the major players. It's understandable because you want to give the audience a sense of where they're coming from and why their actions throughout the series should resonate. Unfortunately, so much of this backstory information doesn't hold any weight to what is happening within the context of the main storyline. And yet, virtually every character is given some sort of flashback. Just when the story is picking up some speed and you feel like something eventful is going to happen, the show taps the brakes a bit and drags things out. Then when it refocuses, the big exciting eventful thing you think is about to happen becomes a nonevent and the story slogs on.

It's these constant starts, stutters, and stops that keeps 'The Last Panthers' from being an effective thriller. While it certainly does have its moments, I'll give a ton of credit to the cast for their commitment, 'The Last Panthers' just doesn't have a whole lot of gas in the can to see the show to a fitting conclusion. The show clearly has some impressive production values on display as it was shot in Belgrade, London, Marseille, and Montenegro. It makes great use of these locations and the series certainly looks big and expensive, but what ultimately comes out of it is very little. Had the series been streamlined down to a runtime of three or four hours, this could have been a lot more than what it ultimately adds up to being. 'The Last Panthers' is good but very flawed, and I can see many audience members falling out of this somewhere around the middle of the third episode. I was hoping with the dynamics at play with a cowboy Interpol agent, an insurance investigator, and a thief there would have been some more sparks on screen but there is just soggy drama that doesn't work as well as it should. I wish I could tell people to stick it through to the end, but that end isn't all that incredible either. It's a fitting conclusion, yes, but not one many people are likely to feel satisfied with. 'The Last Panthers certainly isn't the worst thing out there, but if you're starving for good entertainment, this probably shouldn't be the first thing on your list. That isn't to say it should be avoided, but not something as great as it very nearly could have been.

'The Last Panthers' arrives on Blu-ray thanks to Acorn and RJL Entertainment. The six-episode series is pressed onto two BD50 discs. Housed in a two-disc Blu-ray case with identical slip cover, the set also includes a flier for the Acorn TV streaming service with a free 30-day trial offer. The first disc opens with a series of previews for other Acorn show releases before arriving at the main menu with standard navigation options. All bonus features are found on Disc 2.

'The Last Panthers' certainly looks amazing in HD, but it is also a presentation that is highly stylized to fit the mood of the show. Throughout the series' 1.85:1 1080p presentation for each episode, the show heavily favors drab, darker colors and skews heavily towards blue. Again, this is all intentional and helps strike a more somber mood, primaries tend to have a tough time popping through and flesh tones can appear sickly pale throughout. Detail levels are exquisite and given the series' many filming locations, there is a lot to take in and appreciate. Facial features, clothing, set design, and the scenery is all on display with great clarity. Contrast and Black levels are also tweaked to complement the color schemes and whether or not you're viewing a flashback sequence. Blacks lean towards the rich and inky side of things, but contrast has been intentionally tweaked as well to give it a stylized look. It's difficult to knock this presentation because what would normally be perceived as a "fault" is in fact, intentional and serves the story. To that end, 'The Last Panthers' is given a pretty fantastic transfer that captures the somber mood of the series.

Each episode of 'The Last Panthers' comes packed with a strong DTS-HD MA 5.1 audio track. As the series was shot in five different languages, English subtitles are provided when needed. This series is a largely dialogue-driven affair and is kept front and center. When the action kicks in, the surround channels provide an excellent use of imaging and dimensionality. Even in tight spaces like hotel rooms, there is a constant sense of space with a great use of atmospherics. The score by Clark and Roll the Dice does a great job of filling the track without making it sound too cluttered. Absent of any anomalies of any kind, the audio for 'The Last Panthers' is aces.

A World of Crime: (HD 5:08) A very short, but decent EPK style bonus feature about the genesis of the idea for the show.

The Director's Vision: (HD 5:20) A short, but cool look at the processes of director Johan Renck and his approach to the show.

Executing A Heist: (HD 4:23) Another short but very cool look at the execution of the heist sequence.

The Cop, The Thief, and the Insurance Investigator: (HD 5:58) A quick look at the central characters and the actors involved in the film.

The Real Pink Panthers: (HD 5:05) Perhaps the coolest of these short extra features, this one takes a look at the real Pink Panther thieves and their geo-political presence.

Photo Gallery: (HD 1:29) a collection of production stills and shots from the series.

'The Last Panthers' had tons of potential and only manages to live up to some of it. An international thriller about a brazen diamond heist and the investigators on the hunt of the thieves should have been a real gem, instead, it's too long and drawn out for its own good. It's still a decent watch but one that may leave audience members wishing it was a little more streamlined. Acorn and RJL entertainment brings 'The Last Panthers' to Blu-ray in fine order with a solid A/V presentation and some very brief featurettes to round out the extras. 'The Last Panthers' is decent entertainment that is worth a look.

Sale Price 29.99
List Price 39.99
Buy Now
3rd Party 12.74
In Stock.
See what people are saying about this story or others
See Comments in Forum
Previous Next
Pre-Orders
Tomorrow's latest releases