I Saw What You Did

A simple prank call turns into a night of person-to-person terror in I Saw What You Did, a movie that dials up the suspense.

Teenagers Libby and Kit have found a new way to entertain themselves: by calling up random strangers and tormenting them with a warning: "I saw what you did, and I know who you are." But when a man who has recently murdered his wife becomes their latest victim, the tables are quickly turned…and this wrong number may mean that their number is up.

Joan Crawford (What Ever Happened To Baby Jane?, Trog) and John Ireland are among the stars in this chiller produced and directed by the legendary Master of the Macabre, William Castle (House on Haunted Hill, The Tingler, Strait-Jacket).

Teenagers have been a staple of horror movies - and a target of the deranged killers that populate them - for as long as I can remember, but producer-director William Castle just might have been the visionary who introduced them to the genre. A poor man's Hitchcock who churned out several B-grade chillers in the 1950s and 60s, Castle was famous for using cheesy gimmicks to promote his films, such as dangling skeletons over audiences and wiring seats with electrical charges. For 'I Saw What You Did,' his cautionary tale about adolescent pranksters who discover the telephone can be hazardous to their health, he equipped several theaters with seat belts to keep viewers from being "shocked out of their seats." Though somewhat tepid by today's gruesome standards, this surprisingly tense and deliciously campy thriller doesn't require restraints at home, but does supply a couple of unexpected jolts and showcases a nasty Joan Crawford in one of her final film roles.

"This is a motion picture about uxoricide!" screams the movie's poster art (see Blu-ray cover at right). That sounds like some kind of lethal chemical or rare disease, but the actual definition - which I had to look up -  is the "murder of a wife by her husband." While uxoricide certainly helps drive the plot of 'I Saw What You Did,' the movie focuses more intently on two perky, mischievous, and sexually curious teens, Libby Mannering (Andi Garrett) and her best friend Kit Austin (Sarah Lane), who are left alone in Libby's isolated country house with Libby's younger sister Tess (Sharyl Locke) when their parents leave on an overnight getaway.

For fun, the bored teens make harmless crank calls to random listings in the telephone book. One of Libby's favorite opening salvos to the strangers on the other end of the line is the provocative statement, "I saw what you did and I know who you are." After an unsuccessful attempt to reach someone named Steve Marak (John Ireland), Libby calls back a while later. But in the interim - unbeknownst to Libby - Steve has murdered his wife, brutally stabbing her in the shower in a scene that both rips off and pays tribute to the iconic killing in 'Psycho.' This time, a rattled Steve  - who's also dealing with his nosy, clingy neighbor, Amy Nelson (Crawford) - answers the phone, and when Libby seductively purrs, "I saw what you did and I know who you are," she instantly grabs his attention and sends his pulse racing. Because Steve takes the bait (how could he not?), Libby continues the game, passing herself off as an exotic woman named Suzette and setting herself up for a confrontation with a maniacal killer desperate to eliminate anyone with knowledge of his crime.

The seemingly innocuous telephone has long been an effective vessel of cinematic terror, beginning with the all-time classic 'Sorry, Wrong Number' back in 1948 and continuing up through Hitchcock's elegant 'Dial M for Murder' and the more pedestrian 'When a Stranger Calls,' to name but a few. There's something creepy and mysterious about a disembodied voice that lies, threatens, and manipulates, and 'I Saw What You Did' incisively depicts how an innocent bit of tomfoolery can spiral out of control and lead to dire consequences, especially when those involved don't know when to quit. Anonymity can't always protect you, and - as all of us know all too well - curiosity often kills the cat.

Castle mounts suspense well. Though a few far-fetched plot elements are difficult to swallow (it wouldn't be a true horror movie without them), the premise is believable and relatable enough to pique interest and sustain tension throughout the film's brisk 82-minute running time. The violence may not be graphic, but Castle doesn't pull any punches, especially in the shower scene, which he cleverly twists for maximum impact. (Here, the killer is the one who's taking the shower, and he pulls his fully clothed victim into the cramped, wet confines.) While Castle never achieved Hitchcock's level of renown (by a long shot), he carved his own popular niche, and the two men shared a mutual respect. Hitchcock reportedly modeled 'Psycho' after Castle's low-budget style of filmmaking, and Castle returned the favor with a nod to the Master of Suspense in 'I Saw What You Did.'

Though she receives top billing, Crawford - who, the year before, starred as an axe murderess in Castle's lurid yet extremely entertaining 'Strait-Jacket' - only appears in a few scenes, but, as usual, she makes the most of her screen time, brandishing her claws and displaying some Mommie Dearest-like rage. No one spits out lines like "You married a childish, empty-headed little tramp" like Crawford, who sinks her teeth into the small, thankless role and overcomes tacky jewelry and a mile-high hairdo to file a magnetic performance. Who cares if she's too old to play Ireland's illicit lover and is obviously slumming in material that's beneath her? (Such was the fate of many actresses of her generation who couldn't find work once they reached late middle age.) Crawford is a bona fide legend, and her mere presence elevates this film tremendously.

Ireland makes a menacing villain, glowerIng and grimacIng quite well, but the two giggly, air-headed teens lack polish and flair. (It's no wonder their careers never took off.) And yet their bubbly enthusiasm, lack of guile, and total disregard for their own safety is strangely endearing. Horror movie teens have never been the brightest bulbs in the chandelier, and these two ninnies certainly paved the way for more bone-headed adolescent blundering in the future.

'I Saw What You Did' isn't much better than most low-budget thrillers, but at least its premise is somewhat plausible and it preaches a trite but meaningful message. Though communication methods have majorly evolved over the half century since its release (giving teens even more ways to get into trouble), the core element of 'I Saw What You Did' still strikes a chord, which makes it more palatable than its equally cheap and far more distasteful cinematic cousins. 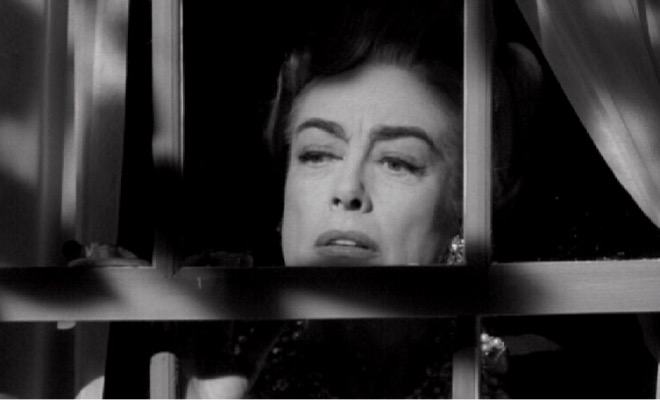 'I Saw What You Did' arrives on Blu-ray packaged in a standard case. Video codec is 1080p/AVC MPEG-4 and audio is DTS-HD Master Audio 1.0. Once the disc is inserted into the player, the static menu with music immediately pops up; no previews or promos precede it.

'I Saw What You Did' was shot on a shoestring budget at Universal City and the production values look undeniably chintzy, but the 1080p/AVC MPEG-4 transfer adds a touch of elegance to this no-frills thriller. Though a flurry of speckles afflict a few stretches of the film (and reel change markers remain), much of the transfer looks crisp and clean, with strong clarity and contrast adding vibrancy and depth to the image. Some scenes appear a bit dull, but most sport a fresh sheen that belies the movie's advanced age. Blacks are rich and deep, a nicely varied gray scale heightens detail levels, and faint grain lends the picture a cozy film-like feel. Most of the movie takes place at night or in dimly lit interiors, yet shadow delineation remains strong and crush is never an issue. Sharp close-ups unfortunately highlight Crawford's advanced age (she looks significantly older than Ireland, making their romance tough to swallow), but they serve the teen and child actors well. Best of all, no noise, pixelation, or other digital issues tarnish the picture, and no enhancements could be detected. Though far from perfect, this transfer serves the movie well, which is good news for Crawford and Castle fans.

The DTS-HD Master Audio 1.0 track supplies clear, full-bodied sound throughout most of the film's 82-minute running time. A few rough patches where levels drop and the audio has slightly deteriorated crop up now and then, but the instances are thankfully brief and don't detract from the overall quality of the viewing experience. A wide dynamic scale keeps distortion at bay and embraces the bouncy, teen-friendly music score, which not only fills the room, but also occasionally overwhelms it. All the dialogue is well prioritized and easy to comprehend, and no age-related hiss, pops, or crackles litter the track. For a low-budget, 50-year-old B movie, 'I Saw What You Did' sounds surprisingly spry, and this mix complements the thriller's creepy goings on quite well.

Only a couple of negligible supplements are included on the disc.

Though undeniably silly, schlocky, and - at isolated moments - scary, 'I Saw What You Did' reminds us how much fun B-grade horror movies can be. The story of two teen girls who find themselves targeted by a desperate murderer after he falls for their random phone prank may seem dated around the edges, but its core message - those who play with fire will sooner or later get burned - still resonates in this age of cyber bullying, Instagram, and Twitter. Producer-director William Castle pads a flimsy story and rips off a couple of classics, but he maintains tension, delivers a couple of jolts, and showcases the dark side of the legendary Joan Crawford in her final American film. Shout Factory's Blu-ray presentation skimps on supplements but features solid video and audio transfers that bring this relatable chiller to life. Hardcore horror fans will find 'I Saw What You Did' rather tame, but an engrossing story, better-than-average performances, and a couple of surprises make this bargain basement thriller worth a look.

Sale Price 15.99
Buy Now
3rd Party 17.45
In Stock.
See what people are saying about this story or others
See Comments in Forum
Previous Next
Pre-Orders
Tomorrow's latest releases