Nadav Lapid's The Kindergarten Teacher is the story of a teacher who becomes at first enchanted, and then ultimately consumed, by the poetic genius of her five-year-old student. Nira (Sarit Larry) discovers that her young student Yoav (Avi Shnaidman) has an otherworldly talent for language and poetry, and becomes interested in cultivating the boy s gift. but when fascination morphs into obsession, Nira pushes the boundaries of her relationship with the boy and his family in an attempt to protect the purity of his talent. Following his critically acclaimed debut Policeman, lapid demonstrates the aesthetic vision of a true auteur, combining a ve rite approach with a thrilling cinematic narrative that has made him, the most internationally acclaimed Israeli filmmaker in recent memory...and perhaps ever (J. Hoberman, tablet).

Gold rain falls over her house

truly the sun of god"

There comes a point with certain issues or topics or situations where strong beliefs or feelings become blinding obsessions. It's something we all do to a certain extent. We all share a weakness to be lulled into feeling strong about a certain thing or galvanizing issue that stirs passions past the point of rational thought processes. All of a sudden we stop thinking clearly and believe that the  course of action we have concocted in our heads is the right one; failing to even consider that there is a just as viable alternative path. Nadav Lapid's slow burning pseudo-thriller 'The Kindergarten Teacher' is a taught examination of obsession and the destructive behaviors that can follow.

Nira (Sarit Larry) is a kindergarten class teacher by day and the wife of a poetic intellectual by night. Her husband (Lior Raz) heads a poetry group each week and together the group dissects and discusses the meaning of not just each little stanza but every single word within the poem and the possible interpretations that can be made. One day Nira overhears the poetic utterances of one of her small students Yoav (Avi Shnaidman) as he free-form composes a poem to his nanny. Nira is instantly struck by the beauty, the passion, and the strengths within the words of a five-year-old child.

As Nira keeps a keen eye on the behavior and spirit of little Yoav, she begins to see herself as a sort of intellectual guardian of the child. She sees the child as a poet prodigy, a raw and unfiltered talent untainted by life experiences or the encroaching views of the world around him. Nira believes that he position as a guardian of the child's talent is just and necessary to the point that she slowly begins to maneuver herself into a more prominent position within the boy's family - regardless of the side effects that it has on her own life. Is Yoav truly a beautiful talent that requires protecting? Or is Nira someone who has blinded herself to the reality that the boy is is just a child? 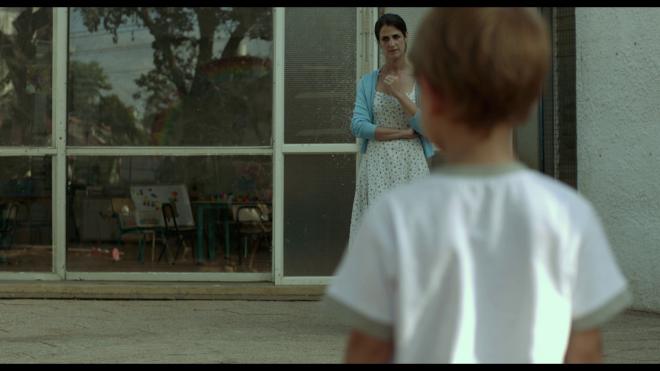 Talk about a contemplative film that forces a measure of self-examination. 'The Kindergarten Teacher' isn't about anything sexual or prurient in that sense as one may infer from that title. The film is entirely about placing yourself in the role of Nira and examining your own obsessive behaviors. All of us have something that grabs us by the spine and won't let go of us until we express ourselves in some form or another. From favorite movies to comic books to sports teams to politics to the type of cars people drive - any topic can lead to a behavior that borders the thin line of becoming destructively obsessive. Where 'The Kindergarten Teacher' is such a brilliant work is that it forces the viewer to not pass judgment on Nira's actions so much as to judge our own behaviors.

Director Nadav Lapid maintains an almost uncomfortable intimate visual style allowing us to essentially see the world through Nira's eyes with the camera getting incredibly close to various character's faces. There is a fluent movement to the camera as well as if we're either Nira or closely following her. It's an uncomfortable effect that only becomes more awkward and unsettling as her obsession with Yoav grows. I frequently found myself tensing up muscles and recoiling ever so slightly throughout the movie. It's not that I ever feared what she may do to the child - it isn't that sort of film - but more in terms that I could put myself in an empathetic position and see where I may act a certain way and why.

Over the last few years I've been on a quiet introspective journey to not act on base reactions. Everyone has a shotgun, gut reaction when something happens on the news or hears something someone say something that is particularly irksome. We've all had those moments where we felt like we had to interject into a conversation that never involved us to begin with. While we may feel that in the moment it's necessary for us to chime in with our own two cents, it's almost never needed - or even wanted. Perhaps I'm having this reaction to 'The Kindergarten Teacher' because here in the United States we're entering into the final stretch of a Presidential Election cycle. Passions run hot, people say stupid things they may or may not regret and relationships strain because we all have ideas and feelings. While other people may have an opinion we don't agree with, there needs to be an amount of mutual respect if a debate is to be open and free. We don't always have to be like Nira and go on a quest to set the world straight in order to fit our particular views. With a fantastic cast, I encourage people to give 'The Kindergarten Teacher' a serious look. As entertainment it's chilling and creepy, as a piece of art it has a lot to say about human behaviors without being preachy or redundantly stating a thesis over and over again.

'The Kindergarten Teacher' arrives on Blu-ray thanks to Kino Lorber pressed onto a Region A locked BD50 disc. Housed in a standard Blu-ray case, the disc opens directly to the film's main menu featuring a standard navigation panel.

'The Kindergarten Teacher' is granted a very strong 1.85:1 1080p image transfer that makes the most of fine facial features, textures and colors. Shot digitally there is an occasional bit of video noise and maintains a video-like quality to it. Even though black levels are beautifully inky and there is a healthy amount of shadow separation without any notable crush issues, the image quality maintains a strange flatness to it, almost like you're watching the world through a fish tank. The only real sense of depth to the image appears during close-ups and outdoor scenes that feature a lot of natural light. Colors look bright and natural favoring golden tones without skewing primaries or altering flesh tones. Everyone in the cast looks healthy and their skin tones don't appear too pink or too pale and sickly. All around this is a very good Blu-ray image, but the occasional flatness keeps it from being a near-perfect presentation.

Sporting a Hebrew language DTS-HD MA 5.1 track with optional English subtitles, this is one hell of an impressive surround track. With the frequent camera movement, imaging and directionality are instantly noticeable. From the opening shot where we see Nira's husband watching a TV show to when the camera pans away and follows Nira into her office, the sound of the TV program moves from the center channels and slowly creeps around the sides until it occupies the rears. Throughout the entire run of the film, there are numerous examples of this effect where the camera moves and the sound shifts in a beautifully natural way. You can still hear what someone may be saying, but since they're not what's immediately on screen, they're not as important. Dialogue is crisp and clear without any issues. Levels are spot on and I never once had to adjust my volume.

Interview: (HD 18:35) Writer and Director Nadav Lapid discusses the genesis of the film, it's real-life origins as well as the making of the film. It's a solid interview that doesn't follow the trite EPK standard issue questions. Given how much he has to say, this segment could have been an hour long and still been just as fascinating.

Going into 'The Kindergarten Teacher' I wasn't sure what I was going to see or expect. Naturally with a title like that, you may expect to see something more nefarious or exploitive, but this isn't that movie at all. If you're into slow-burning thrillers where the tension arises from the examination of someone's behavior and their justifications of said actions, this is the movie for you. It may be a bit too contemplative for some, but I found it to be an impressive film to experience. Kino Lorber has done a solid job with this Blu-ray release as the video image looks pretty darn good and the audio track is outstanding. Some solid extra features are on this disc making 'The Kindergarten Teacher' a recommended Blu-ray.

Sale Price 23.49
Buy Now
3rd Party 20.3
In Stock.
See what people are saying about this story or others
See Comments in Forum
Previous Next
Pre-Orders
Tomorrow's latest releases