Overview - A modern twist on a classic tale, set in the great city of New Orleans, where a beautiful girl named Tiana (Anika Noni Rose) meets a frog prince who desperately wants to be human again. A fateful kiss leads them both on a hilarious adventure through the mystical bayous of Louisiana.
OVERALL
Must Own 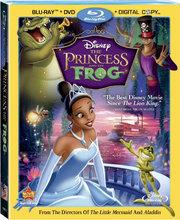 It's a shame that 'Princess and the Frog' didn't do better at the box office.

As the first completely hand drawn animated film the studio had released since the abysmal cowboy comedy 'Home on the Range' in 2004, it was met with rave reviews (it was Time Magazine's #1 movie of 2009) but middling box office. The initial excitement of a really good traditionally animated film being released soon gave way to the creeping suspicion that it could be a short lived high. The hopes of an entire cinematic art form had seemingly been placed in the webbed hands of 'Princess and the Frog' and without the boffo box office, could there be any more?

Well, yes, there will be. But it's already led to the cancellation of one project ('Snow Queen') and the re-titling of another ('Rapunzel' became 'Tangled') thanks to the supposed stigma of the 'Disney Princess' brand. Still, quality will win out, as they say, and 'Princess and the Frog' should be around for a while.

The story is loosely based on the 'Frog Princess' fairy tale except with a European locale being swapped out for a decidedly American setting (New Orleans) and many comedic twists thrown in for good measure.

Our lead is Tiana (Anika Noni Rose), a twenty-something living in jazz era New Orleans, working two jobs in order to save money to open her own restaurant, Tiana's Place. (In a brief prologue her father, played by Terrence Howard, plants the idea for her to open up her own restaurant, not as a business decision, but as a place to bring the community together.) Meanwhile, as she's trying to start her business, a handsome Prince Naveen (Bruno Campos) blows into town and is seduced by the charming conjurer Dr. Facilier (Keith David), who soon transforms him into the titular frog.

At a masquerade ball Tiana is attending (and working – selling her delicious cakes), she runs into the Prince-as-Frog and, remembering the old fairy tale she was read as a child, she kisses him. Except that in this story, she gets turned into a frog too. From there it's a mad dash through the bayou, along with a trumpet playing alligator named Louis (Michael-Leon Wooley) and a Cajun firefly named Ray (Jim Cummings), on the hunt for a cure to their problem before the spell grabs hold permanently.

Along the way they cross paths with a 200-year old voodoo priestess named Mama Odie (Jenifer Lewis) and must stop Facilier during a Mardi Gras parade. Time and time again on this Blu-ray you'll hear about how "New Orleans was really a character," and it really is true. The setting adds so much – a sense of the exotic, a heartfelt ode to a bygone New Orleans, danger and color and light and sound.

And speaking of sound, this is not only a return to traditionally drawn animation but also to the big Disney animated movies of their second renaissance period in the early 1990s. Pixar stalwart Randy Newman, who adds warmth and a wonderful sense of genuine Americana to the proceedings, does both the score and the songs (and they are, across the board, fantastic). In particular Dr. Facilier's song, "Friends on the Other Side," is a showstopper. It's a big, broad, scary song and it is an absolute hoot. When I went to a press screening before the film's theatrical release, after each song a not- inconsiderate amount of applause erupted, like we were at a Broadway show.

'The Princess and the Frog' is a remarkable accomplishment. It's a fantastic film, first and foremost, just as good as any of the classic Disney films of yesteryear and from that second renaissance period. It's full of heart, an engaging and dynamic story, and gorgeously rendered animation. Even if this had been traditional animation's swansong, it would have been a beautiful, emotionally resonant swansong indeed. One shaped like a frog jumping into the Louisiana bayou.

Rarely has hand drawn animation looked this great on Blu-ray. I mean that. This is a stunner. Colors are particularly vibrant, contrast is good, blacks are deep and bottomless, backgrounds pop with an almost three-dimensional depth, and everything looks amazing. That's really all there is to it.

There's not a hint of grain, there are no pesky technical issues (fear not – there's not even a hint of banding or jagged edges), it's just a flawless presentation of a very worthy film. There's not much else to say about this transfer besides the fact that it's one of the very best I've seen and your breath will surely be taken away.

Just as impressive is the DTS-HD Master Audio 5.1 track. It's pretty wow-worthy, too.

As I've said before, this is a big, brassy, Broadway-style musical and the musical moments in 'Princess and the Frog' really pop. In fact, the Keith David musical number "Friends on the Other Side," I would include in any "Blu-ray highlight reel," because it just sounds so amazing. Sequences like that, which are so wholly immersive, with the dialogue so crystal clear and the surround atmospherics at peak precision, are the sequences that will sway anyone towards the glories of the high definition format.

But even when the musical numbers aren't on screen, the mix is pretty much perfect. (I know these are strong words. They're also true.) Dialogue is always crisp, clear, and well prioritized; effects shimmer and shake all around you; all with immersive surround sound that will have you feeling like you're really down in New Orleans (or the marshy swamps beyond).

It's been a while since I've been this out-and-out dazzled by a surround sound track, but if anything's worthy of that praise, it's this mix. It's impressive in every way without ever being overwhelming or "too much." It's an amazing, reference-quality mix all around (to go along with the reference-quality picture).

There are a whole bunch of extras on this disc. Figuring out which ones are "Blu-ray exclusives" is a little trickier. I'm going to go on what the DVD disc also includes as being the shared extras and everything else being Blu-ray exclusive.

Disney’s 'The Princess and the Frog' was a better musical than 'Nine' and a better movie about the underprivileged female black experience in America than 'Precious.' Also, it had a lot of voodoo, which both of those movies sorely lacked. A glorious return to traditional 2D animation, Ron Clements and John Musker’s beautiful, under-seen gem hit all the right notes in a jazzy update of the classic 'Frog Prince' fairy tale set in New Orleans’ French Quarter. Between the catchy Randy Newman songs and the spritely animation, it was hard not to fall in love with this handcrafted fable, as dazzling and engaging as any work of computer-generated trickery. And thanks to a flawless A/V presentation and a bayou's worth of extra features, this is a fairy tale of a Blu-ray disc.

Sale Price 27.48
Buy Now
3rd Party 27.48
In Stock.
See what people are saying about this story or others
See Comments in Forum
Previous Next
Pre-Orders
Tomorrow's latest releases