In one of the most compelling and riveting performances of his career, Richard Burton (Where Eagle's Dare, Cleopatra) portrays Father Goddard, an uncompromising but determined priest who unwittingly bemuse the victim of his own tyrannical behavior.

Based on a true story, Anthony Schaeffer's startling psychological thriller is set in an English boy's school, where two students, Dai Bradley (Zulu Dawn, All Quiet on the Western Front) and Dominic Guardd (Ghandi, Lord of the Rings) topple over the edge of sanity into a psychotic realm of deadly games.

A good thriller has got to have a shocking twist ending of some kind. It's in the "Thriller" manual. From 'Wait Until Dark' to 'Se7en,' that last shocking scene is an essential element of the story. The filmmakers absolutely have to stick the landing on that moment, otherwise, the whole thing goes to pot. A weak final "gotcha" moment can cut the film off at the knees and ruin the experience for the audience. However, the trick with a twist is that it can't be too good. If the twist is too good, that amazing ending becomes a one and done experience, you can't go back and enjoy that shock a second time. Anthony Page's 1978 film 'Absolution' written by master storyteller Anthony Shaffer and starring the late great Richard Burton is a rock solid suspense thriller with one hell of a memorable gut-punch ending.

At an esteemed boy's Catholic School in rural England, life is made up of strict routines and guidelines. Father Goddard (Richard Burton) has dedicated his life to these guidelines to ensure the young men in his charge grow to become pillars of society through the teachings of the Catholic tradition. While he can't reach all of them as well as he'd like, Father Goddard relishes the few boys he does reach, in particular, his star student Benjamin Stanfield (Dominic Guard). "Benjie," as the other boys call him, is a good student and an upright citizen who never breaks the rules - but all of that changes when roaming hippie Blakey (Billy Connolly) starts camping out in the woods adjoining the school grounds. Because the boys tend to spend a lot of their free time in the woods, Benjie gets to know Blakey pretty well, and it isn't long before Blakey starts opening up the lad's world view.

As Father Goddard's influence over Benjie dwindles, his natural reaction is to tighten his grip and make the young man's life miserable. From extra homework to grueling cleaning assignments when the other boys are allowed to take to the soccer fields, Benjie's life at school becomes an exhausting daily grind. When Father Goddard calls the cops who take the chance to wallop a loaner like Blakey without repercussion, Benjie plots a bit of his own revenge. As a joke, during confession Benjie says he killed and buried Blakey in the woods. Because of the rights of confession and his oath as a priest, Father Goddard can't tell anyone, not even the police or his superiors. He has to confirm his worst fears for himself, but all he finds is a sick scarecrow. But again during confession, he's told of another murder, he doesn't want to believe he's being taken for a fool - but he can't keep the worst from his thoughts either. When he discovers a body buried in a shallow grave, Father Goddard is powerless to do anything about a killer in his school who threatens to kill again. 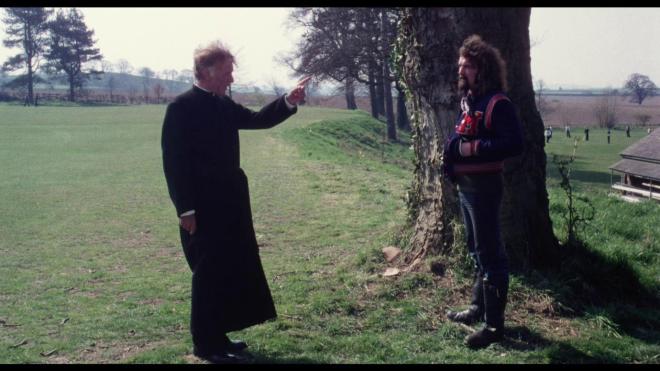 With a swift runtime of about 95 minutes, 'Absolution' is a methodical thriller that takes all of the time in the world to set itself up. Just when you think the film isn't going anywhere, it pulls the rug out from under you. Bit by bit, all of that seemingly needless and wasteful time at the beginning starts to pay off in spades (so to speak). As Father Goddard begins to doubt his own sanity and his faith in God, the film keeps jumping backflips with its characters. Just when you think you've got it figured out, you're hit with one more twist in the plot. And then it reaches the end. As I said before, it's a real gut-punch. I can't say anything more about it because it would be a true spoiler, but it's one of those endings that really takes the wind out of you and you realize how well set up the entire film was. At least that was the case for me because I didn't see that ending coming and I'm a pretty astute student who is rarely surprised by a twist anymore.

To that end, I just can't really say anything more about the story side of things. I don't want to give anything away, but I will say that this film doesn't fall into the trap of a lot of thrillers where once that big ending reveal hits that the film's replay value is diminished. While you already know the ending, you'll be left wanting to watch it again so you can pick up all of the clues and see how well it works out. Sometimes this process can reveal that the twist was a fake, that it cheated by being clever rather than being a work of solid story telling ability. Thankfully, that's not the case here. This story written by Anthony Shaffer holds up, as should be expected from the writer of 'Frenzy,' 'Sleuth,' 'The Wicker Man,' as well as three of the best Hercule Poirot adaptations 'Death on the Nile,' Evil Under the Sun,' and 'Appointment with Death.' While 'Absolution' may not be quite as good as some of those other films, it's still a tight and tense little film that works.

On the performance front, Richard Burton does what Richard Burton has always done best. He's a fantastic Father Goddard and plays the role with complete conviction. It's almost as if this film was his atonement for 'Exorcist II: The Heretic.' At the center of this story is Dominic Guard as the impressionable Benjie. Benjie is the anchor of this story, he's the pawn between Richard Burton's Father Goddard and Billy Connolly's Blakey. The two have their own subtle battle for the young man's head and heart and Dominic Guard does a fantastic job with the material. Billy Connolly also deserves a shout out as he manages to do a lot with a very limited role. The performances are first rate and ground a lot of the action and events of this film and keep that tension tight and suspense building. 'Absolution' was an unexpected and wickedly entertaining little flick that kept me on the edge of my seat. This is one of those movies that I eagerly look forward to showing to various friends and family.

'Absolution' arrives on Blu-ray courtesy of Kino Lorber and their Studio Classics line. Pressed on a Region A BD25 disc, the disc is housed in a standard Blu-ray case. This disc opens directly to a static image main menu.

With a 1.85:1 1080p transfer, 'Absolution' is a visual mixed bag. The artwork for this release indicates that this film has been given a new 2K restoration, but those hoping for the best of the best may be let down. Film grain is retained and provides the film with some rich detail levels. Facial features are given their due and the impressive production design work of the school is appreciable with this transfer. That said, the grain field can appear a bit noisy, insect-like, in some of the darker moments that may put off some viewers. Colors aren't as sharp and prominent as they could be and can tend to appear a bit muted. Outdoor scenes, especially whenever Benjie visits Blakey in the woods offers plenty of primary pop and is much nicer to look at. Black levels are solid without any contrast issues. While much of the print sourced for this transfer looks pretty great with only slight speckling, the last act looks to have been sourced from a different print. These final moments feature paler colors, looks a little softer, and the speckling picks up quite a bit. While this isn't a deal breaker or anything, it's a notable shift and did impact the scoring for this transfer. All in all for a deep catalogue release, this is still very, very good.

'Absolution' features an English DTS-HD 2.0 audio track that shows its age. From the outset, hiss and pops are carried throughout the entire run of the mix. While these age-related anomalies are present, they're not so obnoxious as to completely pull you out of the film. Dialogue holds its own very well throughout. Some sequences where the characters speak in hush voices, I can't get into specifics due to the story, but these scenes can sound a little muddled so you may need to up your volume levels. Sound effects and atmospherics are pretty solid, they had a tinny canned quality to them, but there is a nice sense of space and dimension, especially during any scene in the main chapel and long corridors. This is a serviceable audio mix, just not incredible.

'Absolution' features another great performance from the legendary Richard Burton in a rock solid thriller written by the great Anthony Shaffer. It's a movie that takes its time to build the suspense and then it rolls along and carries the audience along all the way to the surprising ending. I thoroughly enjoyed this little thriller. Kino Lorber brings the film to Blu-ray with a pretty decent new transfer and a serviceable audio track. Extras are only a collection of trailers. I enjoyed this movie quite a bit, but the technical side of this release keeps this from being a fully recommended purchase. To that end, 'Absolution' is worth a look on Blu-ray.

Sale Price 31.3
Buy Now
3rd Party 31.3
In Stock.
See what people are saying about this story or others
See Comments in Forum
Previous Next
Pre-Orders
Tomorrow's latest releases