The Blinding Sky... The Blazing Sands... The Merciless Jungles of Burma s Purple Hell ... Comes the Mightiest of all Adventures Between Heaven and Earth! Screen icon Gregory Peck (On the Beach, Moby Dick, Night People) gives a commanding and convincing performance in this exotic World War II drama. An engrossing and visually alluring film full of harrowing suspense, The Purple Plain is a classic war film everyone should see. After his wife is killed during the Blitz, Forrester (Peck) is bent on achieving one thing in the war: his death. But when his plane crash-lands in enemy territory, he realizes that he must save himself in order to guide his two injured companions to safety. As they cross the Burmese desert with no food and little water, Forrester's will to live grows stronger than ever! Stylishly directed by Robert Parrish (The Wonderful Country, The Destructors) and based on a novel by H.E. Bates (Summertime).

The sequel to The Great War has proven time and time again to be the perfect backdrop for a wide array or cinematic offerings. The Character Drama is probably one of the most prevalent, a movie about someone undergoing some sort of crisis of confidence or faith who finds that spark within themselves to soldier on towards a personal victory. These movies are countless in number, some good, some bad, but for the most part, they're worth watching. The same is true for Robert Parrish's 1954 film 'The Purple Plain' starring Gregory Peck. While set during WWII, the film isn't so much of a war film as it is a drama about a man finding his place and value in the world after a tragic loss.

Squad leader Bill Forrester (Gregory Peck) is a Canadian bomber pilot flying for the British in Burma. Day after day he makes one heroically successful bombing run after another. While on paper his deeds are deemed heroic, his fellow pilots, his navigator, and his superior officers no different - Bill Forrester is insane and wants to die. No matter what he does, Bill survives every crazy stunt without a scratch. What people don't know about Bill is that he is actually a widower. While he and his wife were celebrating their marriage and honeymooning in London, she was killed during an air raid. Ever since this tragic event, all Bill has on his mind is accomplishing his own death. All of that changes when he meets the beautiful Anna (Win Min Than).

Anna revives that faded spark for life deep within Bill's heart. As he slowly awakens and believes that life is worth living again, the rest of his comrades still don't trust him. When his former bunkmate Blore (Maurice Denham) gets new orders and needs transportation, Bill and his new navigator Carrington (Lyndon Brook) are assigned with the job of flying him. Blore is well aware of Bill's history and still doesn't trust the man, but orders are orders. The flight should have gone off without a hitch, but when an engine catches fire, the trio has to make a crash landing deep in the Burmese desert. With no food and very little water, it's up to Bill to ensure that an unhinged cowardly Blore and a wounded Carrington get out of that unforgiving wasteland alive. 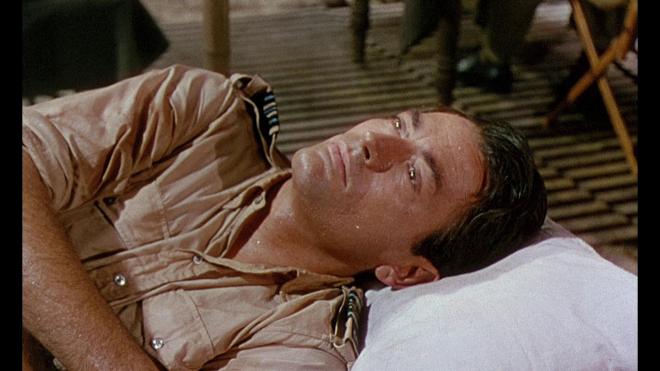 'The Purple Plain' finds its strength and resolve to tell a solid survival yarn entirely on the back of Gregory Peck's performance. It isn't easy seeing a suicidal Atticus Finch try to find new ways to kill himself regardless who may be sitting in the co-pilot seat. Peck was an actor who always gave every role everything he had, and his turn as Bill Forrester is no exception. We watch him effortlessly transform from being an uncaring madman to a sympathetic human. While the new-found love angle with Win Min Than's Anna may be a bit contrived, Director Robert Parrish wisely doesn't overplay his hand. He lets their budding romance percolate just enough to be more than a passing infatuation without becoming a cheap romance. Even if Anna doesn't feel the same love for her, just seeing her one more time is a reason to live and walk over forty miles without any cover from the sun.

If you're expecting a rip roaring action adventure film, 'The Purple Plain' may come up short of your expectations. If you're more interested in watching one of the finest actors of any generation to grace the silver screen deliver yet another memorable role, this film should deliver. There is a great character drama laced within a taught and suspenseful survival film structure. The survival story may kick in a tad late in the film for some people's enjoyment, but because so much time is spent building up Bill's character and his arc, we actually care to see him find a reason to live and we become invested in every effort he makes to survive. 'The Purple Plain' is a fine film and should provide most folks with a couple hours of solid entertainment.

'The Purple Plain' arrives on Blu-ray thanks to Kino Lorber and their Studio Classics line. Pressed onto a Region A locked BD25 disc, the disc comes housed in a standard Blu-ray case. The disc loads directly to a static image main menu featuring standard navigation options.

If it wasn't for the damage displayed on this source print, 'The Purple Plain' would feature a pretty fantastic 1.66:1 1080p image transfer. On the plus side of things, fine film grain has been retained, allowing for a richly detailed presentation. From facial features to costuming and production design to the Sri Lanka shooting locations, the transfer offers plenty of visible detail to appreciate. Colors tend to skew towards warmer earth tones, but primaries hold their own ensuring the coloring isn't too stylized and appears natural. Black levels and shadows are also very strong allowing the image to retain a sense of depth. Now about that damage I mentioned. Nicks, scratches, tears, speckling - you name it - this print of the film has it on display. While it isn't terrible exactly, the damage does become a bit distracting during darker scenes and night shots. The damage really is the only thing holding this transfer back making me wish this film had undergone even a modest restoration effort.

'The Purple Plain' comes packed with a decent, not amazing DTS-HD MA 2.0 audio track. Considering that the dialogue, score, and sound effects elements are in decent order, my only real gripe with this audio track is that it sounds as if it were mixed too low. You may find that you need to kick your volume up louder than you would for an average viewing, but once you do levels are stable and without any issue. Even during the film's action sequences and the levels become more intense, the track handles everything well enough and shouldn't require any additional adjustment. The audio is also in pretty decent shape as there is only some very slight hiss detectable but is otherwise free of any other age-related anomalies.

I found 'The Purple Plain' to be a tight, tense, character-driven survival thriller. Gregory Peck is great as always in his role as a man who comes to find a reason to live, right in time for him to be put through one hellish ordeal. I enjoyed the film quite a bit and hope that others give it a shot. Kino Lorber brings 'The Purple Plain' to Blu-ray with an image transfer whose source print could use more than a little tender loving care. Once the audio volume is raised a bit the DTS track does just fine. With only trailers for other films as the only extra features, I'm left calling this Blu-ray release of 'The Purple Plain' as worth a look, only because the movie is worth the time you put into it.

Sale Price 29.95
Buy Now
3rd Party 25.94
In Stock.
See what people are saying about this story or others
See Comments in Forum
Previous Next
Pre-Orders
Tomorrow's latest releases