World War II is a cinematic sub-genre unto itself. From horror films to comedies to tragic romances, the most grizzly and horrific world event has graced the silver screen in one form or another serving as the perfect backdrop just about any kind of story. One such film to come from the war was the dramatic reenactment. These are the type of films that seek to dutifully detail every aspect of an important event during the war. Perhaps the most famous of this sort of film is 1970s 'Tora! Tora! Tora!' and its reinactment of events surrounding the Pearl Harbor bombing from the Japanese preparations to how U.S. commanders dropped the ball. 10 Years earlier, Director Robert Montgomery released his 1960 film 'The Gallant Hours' about Admiral William F. Halsey Jr. and the U.S. victory at Guadalcanal. 'The Gallant Hours' may not have the scope or bravado of 'Tora! Tora! Tora!' but the film manages to give viewers an intimate look at one of the most important turning points in the war.

It is 1947. The war is over, the Japanese have long surrendered, and Fleet Admiral William F. "Bull" Halsey (James Cagney) is now facing inactive duty and he is to be honored for his grit and cunning when the American Navy and armed forces in the Pacific were grossly outnumbered. As his honorary ceremony is about to begin, Halsey is thrust back into a sea of memories surrounding that great yet costly victory. When he held the rank of Vice Admiral, William Halsey was given command of the Pacific Fleet, and it was in poor condition. With just a handful of warships, a single aircraft carrier, and very few fighter planes with skilled pilots to hold back the Japanese armada. As Halsey and his fellow commanders do their best to form a sound defensive strategy, Admiral Isoroku Yamamoto (James T. Goto) designs his own plans to lead the Japanese forces towards a decisive victory.

'The Gallant Hours' is best described as a docudrama. It's one part documentary complete with omniscient narrator while also being a dramatic recreation of events. Because this film is so steeped in detail and accuracy to historic events, it can often feel a bit laborious at the outset. Just when you're being introduced to a new character who is advising Cagney's Halsey, the narrator chimes in to give us the person's backstory complete with their favorite hobby. While the narrator does provide some interesting and relevant information, these frequent interruptions can cause the film to stutter and stop and tend to drag out the front end of the film. The interruptions can also deflate a bit of the film's tension because in several instances the narrator says whether or not a particular person is going to survive. 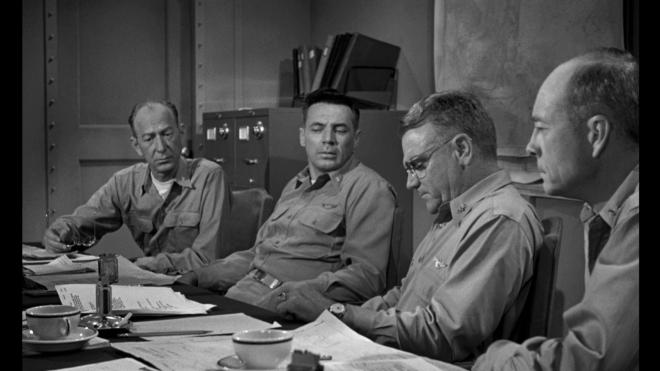 Once the moments of narrative exposition pass, the film settles into a fine groove that follows Halsey hour by hour, day by day as he sets his plans to thwart the Japanese into motion. With every victory and every defeat, we see Halsey's anguish as he personalizes the lives lost and Cagney delivers a fully nuanced performance. For how flamboyant Cagney was in his youth, it's interesting to watch him play someone so reserved and emotionally guarded. We don't need to see the man cry to know he's hurting when he hears of the death of a close friend or the worry that his son may have been lost at sea, all Cagney needed to do is relax his face just a little bit. Playing Admiral Halsey may not be the part he's known for, but Cagney delivers one of his best performances in this film.

Taken as a whole, 'The Gallant Hours' is a solid piece of informational entertainment. it may not feature intricate battle sequences, and it may keep the audience at an arms distance from getting to know a lot of the real-life characters, but the film still manages to pull the audience in by giving us such an abundance of detailed information. It's incredible to look back at an incident from nearly 75 years ago and realize how important that victory was. This film allows the audience to sit back and appreciate the events without being overly dramatized or fictionalized to make the incident more entertaining.

'The Gallant Hours' arrives on Blu-ray thanks to Kino Lorber and their Studio Classics line. Pressed onto a Region A locked BD25 disc, the disc is housed in a standard Blu-ray case. The disc opens to a static image main menu featuring traditional navigation options.

'The Gallant Hours' makes a fine leap to Blu-ray with this 1.66:1 1080p image transfer. What really stands out with this film's black and white photography is the sense of three-dimensional depth. So much of the film is comprised of various actors talking in cramped ships quarters or briefing rooms and yet the image feels like there is a notable amount of space and dimension. Blacks are rich and deep with plenty of shadow separation in the greyscale. Fine details are abundant as it doesn't appear that the film grain has been scrubbed in any way. Again due to some of the no-frills settings of the film, some of the production design can be pretty boring to look at, but when Halsey tours the battlefields or moves out of his cramped offices, the set design details come through with great clarity. The print sourced for this transfer is in pretty great shape with only mild speckling here and there. All around a pretty fantastic transfer.

'The Gallant Hours' arrives with a very good DTS-HD MA 2.0 audio mix. This film relies heavily on dialogue and narration to tell its story and thankfully every spoken word can be heard loud and clear. Again, because of the cramped indoor sets, some of the film can sound a bit flat, but the subtle sound effects work and the choral score by Roger Wagner fills in the dead air nicely. The audio is free of any age related anomalies without any hiss or pops to speak of. Levels are just fine and don't require any adjustments as the track keeps to the midranges without any notable spikes or drop-offs.

'The Gallant Hours' may not be a war film that depicts intricate battles, but it's one that instead focuses on the decision makers, the men who made the calls to send men into battle for better or worse. Cagney delivers a reserved but exceptional performance as Admiral Halsey. Kino Lorber brings this fine film to Blu-ray in terrific order featuring a solid image transfer and audio track to match. Unfortunately, the only extra features are trailers. This Blu-ray release of 'The Gallant Hours' is recommended.

Sale Price 15.89
List Price 29.95
Buy Now
3rd Party 13.89
In Stock.
See what people are saying about this story or others
See Comments in Forum
Previous Next
Pre-Orders
Tomorrow's latest releases