Barry Levinson (Rain Man) mines cinematic gold in Bandits, starring Cate Blanchett, Bruce Willis and Billy Bob Thornton. Evoking memories of another silver screen trio Clark Gable, Spencer Tracy and Myrna Loy in Test Pilot Willis (The Sixth Sense) and Thornton (Sling Blade) star as Joe and Terry, escaped convicts on the lam planning to rob a few banks to fund a new life just south of the border. Blanchett (Carol) stars as Kate Wheeler, a woman also on the run from an unhappy marriage. Fate intervenes when Kate runs into Terry (quite literally) with her car. She soon finds herself joining the boys on their cross-country trek in this comic caper co-starring January Jones (TV s Mad Men) and William Converse-Roberts (Kiss the Girls).

When a film has a tough reputation as an expensive flop, it can be difficult to look past that and just watch and appreciate a movie. After all, there's got to be a reason why a film doesn't connect with an audience enough to even recoup its budget, right? 2001's 'Bandits' directed by Barry Levinson and starring Bruce Willis, Billy Bob Thornton, and Cate Blanchett is a movie with just that sort of bad reputation. The film cost an arm and a leg to produce, didn't exactly wow the critics, and only made back half its production costs. At the end of the day, the final film is actually quite a bit of fun featuring a talented comedic cast.

Prison isn't so much of a place as it is a lifestyle. While career thief Joe Blake (Bruce Willis) and his neurotic  partner Terry Collins (Billy Bob Thornton) have spent a good number of years behind bars, prison just isn't for them. That's why Joe steals a cement truck and the pair bust out of the clink. After successfully ditching the cops, Joe and Terry start thinking about the future. They obviously don't want to go back to prison, but they don't exactly want to scoot on down to Mexico empty handed. With the dream of opening their own resort, they need cash. Banks have cash, lots of it in fact, and they are thieves so it doesn't take long for them to put two and two together.

Robbing a bank is easy, what's hard is getting in and out without getting killed or arrested. Together, Joe and Terry get the bright idea to kidnap the bank manager the night before and get him to let them into the bank before it opens. The plan works time and time again, and because they have elaborate disguises provided by Joe's cousin Harvey (Troy Garity), no one knows who they really are! The plan to get down to Mexico with a load of cash is working great until bored housewife Kate Wheeler (Cate Blanchett) accidentally hits Terry with her car and ends up joining in on the gang's exploits. This wouldn't be a problem if Joe was the only one that had feelings for her, but Terry also comes to fall for her, making their working arrangement a little problematic, to say the least. 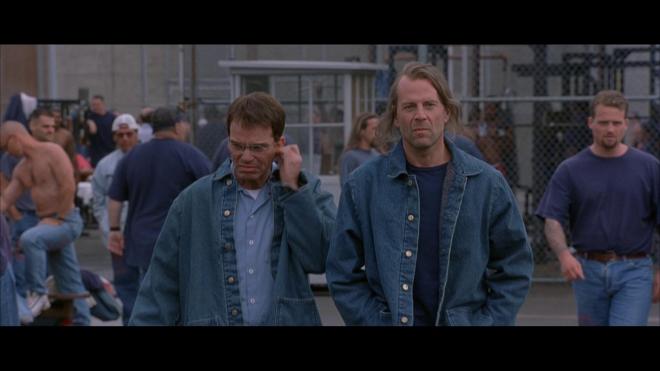 'Bandits' is one of those movies that is perfectly decent entertainment that for some reason never really found an audience. I'll admit to being a late arrival to appreciating this little movie because it was my wife who introduced me to it several years ago. While 'Bandits' is not Barry Levinson's best work, not by a mile, it also isn't his worst - that would be 2004's 'Envy.' The plot to the film may be a bit contrived at times, but what keeps this film afloat are the performances and the film's loose and fun nature. It's not a movie that tries to say anything new about criminals, nor does it try to impress you with an over-the-top heist like 'Ocean's 11.' All it wants to do is entertain you and on that score, it does. Sure, the presentation may be a bit jumbled and the plot line of the crime show reporter played by Bobby Slayton may be a bit tacked on, but it doesn't really bring the film down any.

Speaking of performances, it's a heck of a lot of fun to watch Bruce Willis and Billy Bob Thornton work together. While their time together on 'Armageddon' wasn't exactly a comedic tour-de-force, the pair had some chemistry and it's on display here. Willis is the sharp straight man to Thornton's goofy disease-obsessed comic relief. The humor is subtle and often the disguises the pair have to sport for a heist adds a little extra spice to the show. 'Bandits' isn't a movie that's very big on belly laughs but instead works to keep you chuckling and smiling. When Cate Blanchett's Kate enters the mix, she just brings more flavor to the show and is an organic fit for the two to work off of.

Is 'Bandits' a "perfect" movie? No, but then it didn't have to be in order to entertain. I think the film largely gets its bad rap because it was a movie that for some reason cost over $80,000,000.00 to produce and earned back a little over half that much. Critics may not have loved it either, but scouring a few of the old reviews, few critics actually skewer it and most have nice things to say about the cast and the fun nature of the film. If you haven't given 'Bandits' a try, give it a look. If you already saw it and didn't care for it, it's a good time to give it a second look. 'Bandits' is a perfectly good and entertaining little flick that deserves a few more fans.

'Bandits' arrives on Blu-ray thanks to Olive Films. Pressed onto a Region A BD25 disc, the disc is housed in a standard Blu-ray case and opens directly to a static image main menu with traditional navigation options.

'Bandits' comes with a dated, but still very good looking 2.35:1 1080p transfer. Over the previous DVD release, the detail levels and the amount of visible film grain is a pleasing improvement. This is especially the case with each new disguise the actors wear allowing you to appreciate the goofy wigs and fake facial hair. Because the film was shot throughout northern California and Oregon, the colors are sharp but tend to be on the foggy-cooler side of the spectrum. Earth tones are strong while primaries have the right amount of presence to them. Flesh tones look nice and even. Black levels are strong but the film also doesn't have much in the way of depth during some sequences and the image has a tendency to flatten. There is another odd anomaly that is baked into the film, whenever there is a high-speed action sequence, the image can randomly look sped up with a ton of motion blur. Since this movie was shot on Super 35, I'm not sure what the cause of this is exactly, but it's not a fault of the transfer and was something found in the previous DVD as well. All around this is a clear improvement over the DVD.

Sporting a DTS-HD MA 5.1 audio mix, 'Bandits' sounds pretty great. As most of the film is dialogue loaded, the front/center channels do most of the heavy lifting, but the surrounds keep active and provide the film with a strong sense of atmosphere. Dialogue is crystal clear and easy to hear without any interference from the soundtrack or effects elements. There are a few action moments where the surrounds kick in and really come to life, but for most of the film, they handle the side atmosphere sounds to give the track a nice sense of space and dimension. The track is free of any hiss or breaks and sounds clean and natural with well-balanced levels and a decent sense of imaging. This track is a notable improvement over the Dolby Digital track provided for the DVD.

'Bandits' deserves a second look. It's a solid little comedy that features a fantastic cast doing what they do best. Olive Films brings the film to Blu-ray in fine order with a solid image transfer and a strong audio track. The only extra feature is a trailer, none of the features from the DVD have been ported over. Fans looking for a better A/V presentation for the film should consider a purchase, if you're new to the movie, this Blu-ray release of Bandits is worth a look.

Sale Price 19.99
List Price 29.95
Buy Now
3rd Party 21.62
In Stock.
See what people are saying about this story or others
See Comments in Forum
Previous Next
Pre-Orders
Tomorrow's latest releases