Breaker! Breaker! features Chuck Norris (Firewalker) at his butt-kicking best as a trucker on a mission to locate his kidnapped brother. J.D. Dawes (Norris) finds himself run afoul of the corrupt and unscrupulous Judge Joshua Trimmings (George Murdock, The Mack) and his henchmen, when he ventures into a small desert town in search of his missing brother. Judge Trimmings doesn t much like truckers ... and Dawes doesn t much like anyone who messes with his family it s a combustible combination in the high-octane action drama Breaker! Breaker!, directed by Don Hulette (A Great Ride), written by Terry Chambers (13 Nuns) and co-starring Jack Nance (Eraserhead), Michael Augenstein (Macbeth), Don Gentry (Born Again) and Terry O Connor.

When a particular actor is known for a certain string of films during a specific era of filmmaking, it's often easy to forget that they had a career before that one big breakout hit. Before the 'Missing in Action' films, before 'Invasion U.S.A.,' before he made 'Sidekicks,' Chuck Norris was a stunt man and fight choreographer. As his friend Bruce Lee repeatedly pushed and prodded him into doing films, Chuck was content to be a side character and not a leading man. That all changed with 1977's 'Breaker! Breaker!' featuring a beardless Chuck Norris going full 'Walking Tall' with a truck and his two high-kicking feet of fury.

J.D. Dawes (Chuck Norris) is a quiet man, a salt of the earth sort of fellow who doesn't start fights and never wants to take part in them. But if a fight happens to come his way, he does what he can to finish it fast. Since all J.D. wants to do is drive his rig from point A to point B, people leave him alone and he leaves them alone in return. But when the corrupt Judge Trimmings (George Murdock) hijacks J.D.'s little brother Billy (Michael Augenstein), J.D. is left with no option other than to travel to the corrupt town of Texas City, California.

Texas City is one of the most corrupt towns on the map, and with the local law working as shakedown hijackers, most truck drivers steer their rigs clear of the town. But because they have Billy, J.D. has no other choice to stand up to Judge Trimmings and his goons. On top of waylaying and extorting truckers and the people who unfortunately pass through town, J.D. uncovers a hornet's nest of greed and corruption with more than a few suspected murders.

As soon as J.D. gets to town he's set upon by the local law looking to either run him out of town or kill him. J.D. fights his way clear, but he soon realizes that the entire town is built on the trade of stolen cars and truck rigs. With few people in his corner, J.D. manages to find the help he needs through the caring and beautiful Arlene (Terry O'Connor). Arlene believes her husband met an untimely end at the hands of Judge Trimmings. Before Arlene can leave with her small boy, she must first help J.D. find his brother and help him put an end to the town's corruption - even if that means calling in an 18-wheeler cavalry! Bullets will fly, cans of Whoop Ass will be opened, and J.D. will unleash true trucker justice onto the lawless citizens of Texas City. 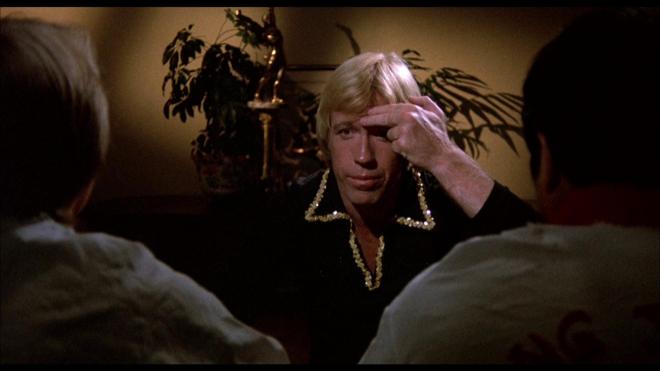 Just to be clear at the outset, 'Breaker! Breaker!' is one of those movies that in the grand scheme of things isn't very good, but it's still darn entertaining. The film really is a low rent 'Walking Tall' ripoff that trades in a two-by-four for an 18-wheeler. Director Don Hulette working from a script by Terry Chambers does what he can to keep the action moving and the characters interesting, but the film may have been better suited as a 45-minute episode of 'Kung-Fu' or even 'The Incredible Hulk' instead of an 85-minute feature film. The story is incredibly thin and the characters so one-dimensional that a lot of the film feels padded out and unnecessary. But again, that doesn't keep it from being entertaining!

As Chuck Norris would prove in later efforts, he was a dynamic and present leading man. 'Breaker! Breaker!' was just his second outing in the leading role position and you can already see where the man was starting to define his typical "I don't want to fight, but will kick butt if I have to" characteristics. The steely stare is there and anytime some dope thinks they have the drop on him they soon learn why Chuck wears such flexible denim jeans as he personally introduces his foot to said individual's sternum and or face. George Murdock is great as Judge Trimmings even though he's basically playing a drunken version of Boss Hogg. The idea of his character being a small town dictator is compelling enough even though his reasons and motivations are never articulated. Terry O'Connor does well as Arlene and avoids a number of the stereotype damsel in destress tropes while proving to be a valuable supporting character.

'Breaker! Breaker!' was a film that I had seen years ago but had forgotten about. I was reintroduced to it not long ago when RiffTrax licensed it for one of their VOD riffs. Sure, the film is easy pickings for some great jokes, but it's also a great showcase film for better Chuck Norris flicks to come. 'Breaker! Breaker!' may not be of the same caliber as 'The Octagon,' or 'Silent Rage' but it stands on its own two fast-kicking feet and proves to be a heck of a lot of fun - especially the slow-motion high kick grand finale!

'Breaker! Breaker!' arrives on Blu-ray thanks to Olive Films and is pressed onto a Region A locked BD25 disc. Housed in a standard Blu-ray case, the disc opens directly to a static image main menu featuring standard navigation options.

'Breaker! Breaker!' features a half-way decent 1.85:1 1080p transfer. Fine film grain is intact and allows the image to display some rather impressive detail levels. Facial features, costumes and the goof faux-western sets that make up Texas City look pretty great here. The film is bright and sunny allowing for warmer color tones to shine through. Primaries have plenty of pop and presence, Chuck's blue denim uniform looks bright and reds are strong without pushing flesh tones too pink. Black levels are solid all around, there was only a brief instance of crush that I could notice, but otherwise the image has a nice sense of three-dimensional depth to it. The only real issue of note for this film comes in the form of some slight speckling every once in awhile and whenever an optical zoom is employed there is a noticeable increase of visible hairs and debris on screen, but thankfully those moments don't last too long. All around this is a pretty great looking transfer.

'Breaker! Breaker!' gets a lot of mileage out of it's DTS-HD MA 2.0 audio track. The film has just the right amount of ambient background effects and a sense of image to make this track feel like it actually has some space around the elements. Dialogue is crystal clear and is never at odds with the score Don Hulette (who also directed and produced the film) or the various sound effects. The track handles the highs and lows fairly well without needing to adjust levels whenever the film switches from conversation to action. These turns happen on a dime and the track is never outpaced by the action. The big demolition derby climax sounds fantastic! During a couple of brief moments, I could detect some slight hiss, but if was only for a few moments and was never annoying or intrusive. All around a fine mix.

'Breaker! Breaker!' may not be a great movie by any stretch of the imagination, but it proves to be a pretty fun movie and a solid indicator of Chuck Norris' career trajectory. The flick is good light-hearted fun and should be viewed as such. Olive Films has brought 'Breaker! Breaker!' to Blu-ray in fine order with a strong A/V presentation. Sadly the only extra feature is a theatrical trailer. Having the RiffTrax commentary as a bonus would have been great - and is worth a purchase unto itself - but all around this is a pretty solid movie-only Blu-ray release. Worth a look.

Sale Price 19.11
List Price 29.95
Buy Now
3rd Party 22.25
In Stock.
See what people are saying about this story or others
See Comments in Forum
Previous Next
Pre-Orders
Tomorrow's latest releases