Having just returned from a mission to Mars, Commander Ross (Justin Lazard) isn't exactly himself. He's slowly becoming a terrifying alien entity with a one-track mind – to procreate with human women!

When countless women suffer gruesome deaths after bearing half-alien offspring, scientist Laura Baker and hired assassin Press Lennox (Michael Madsen) use Eve (Natasha Henstridge, Species), a more tempered alien clone, to find Ross and his virulent brood. But they underestimate Eve's maternal drive, and before long she escapes to mate with Ross in order to create a purer and unstoppable race that could spell doom for mankind.

As time is running out, the ultimate battle takes place in a chilling climax that puts Darwin's theory to the ultimate test... only the strongest species will survive.

"Oh, this is awful! This is just awful!"

Certain movies just cry out for a sequel. There's something about some movies where that first adventure just leaves the general audience thirsty for more, whether that be rampaging dinosaurs, frozen superheroes from World War II, or aliens that like to burst through people's chests. Franchises are born out of that one big hit film that leaves fans wanting more. However, the franchise model is often misapplied to certain movies where a "one and done" approach should have been maintained. The '1995' H.R. Giger inspired alien creature feature 'Species' was a modest hit that banked on the premise of a sexy half breed human/alien that had sex with men and killed them as she tried to get pregnant in order to spawn a new breed of terror. The movie was fun, and it did leave the door open for a sequel, but one wasn't needed. 1998's 'Species II' proved that the well of this franchise was pretty shallow.

After the last outing with the alien/human hybrid Sil, the defense department realized their mistake in blindly following the alien instructions to merge human and alien DNA. Now under the watchful eye of the Pentagon and Colonel Carter Burgess (George Dzundza), they've recreated the human/alien now known as Eve (Natasha Henstridge again) in order to learn the alien's biological weaknesses. Kept under strict supervision by Dr. Laura Baker (Marg Helgenberger), she's also separated from any and all men so as to not spur her sex drive. All of this effort is to discover the creatures' weaknesses - if they have any - and the solution they find will be quickly put to the test.

Humans have just landed on Mars! In a state-of-the-art spacecraft that was sponsored by the likes of Reebok, Sprint and Pepsi, pilots Dennis Gamble (Mykelti Williamson) and Anne Sampas (Myriam Cyr) eagerly await the news that their captain Patrick Ross (Justin Lazard) has landed safely on the red planet. With the American flag firmly planted in Martian dirt, Patrick gathers up some soil samples and scurries back onto the mothership orbiting above a hero to the entire human race. After a quick conversation with the President (Richard Belzer), the crew is headed back to home, unfortunately, they managed to pick up a guest. Packed in one of the soil samples is a primordial alien ooze that is the basis of the alien DNA of Eve. The ooze infects the crew and they unknowingly bring a plague back to Earth with them.

When Patrick returns home after 11 months in space, he's a tad randy. As the son of Senator Judson Ross (James Cromwell), he has a reputation to live up to - especially with the ladies. After a particularly dangerous liaison that leaves two women dead, Patrick is now a father of two alien hybrid children! With every woman that Patrick mates with, Eve's senses go haywire. As the scientific team becomes convinced there is another alien out there, they bring in tough guy Preston Lennox (Michael Madsen) to hunt the creature down with Eve as a bloodhound. But can they trust Eve? What is going to happen when she meets one of her own kind? Will their new weapon work on this new alien/human hybrid or will mankind be wiped off the map? 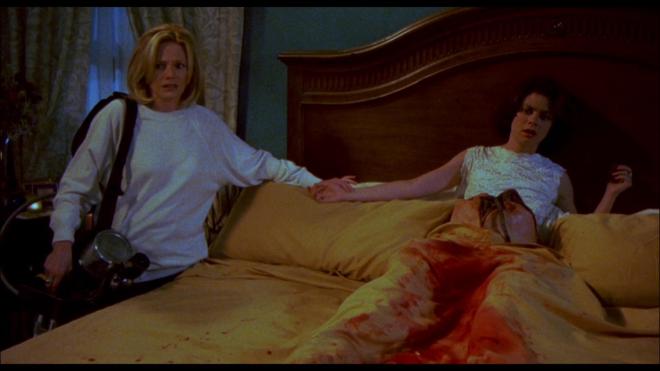 'Species II' is quite possibly the very definition of diminishing returns. From the story to the direction to the performances, this is a movie that just didn't try to be anything new or exciting. It's also a tonal mishap. Is it supposed to be a sci-fi/horror film or a comedy? While some moments are obviously played for laughs with numerous visual puns, the rest of the movie tries to play things straight like it is some sort of horrific STD metaphor. There's never a balance to the show. One minute it's being goofy as all get out and the next the most horrific birthing scene since 'Xtro' is happening on screen!

While Justin Lazard puts a lot of effort into his role as Patrick, a man conflicted about who or what he is, the rest of the cast never really amounts to much. Even James Cromwell who is usually a good sport for films like this appears bored with his scant few scenes. Mykelti Williamson is fine, but he's just not in it much and Myriam Cyr is really only there to die in a gloriously horrific way. As for the returning cast of Natasha Henstridge, Marg Helgenberger, and Michael Madsen, the only one of the three that even tries to do anything with their role is Henstridge. Since Eve is supposed to be more of an innocent character, Henstridge does her best to give the part some nuance, but even then half of her part is reduced to her running in slow motion while in a state of undress. Madsen and Helgenberger appear to be here to just cash a paycheck and say and do as little as possible.

Taken as a piece of B-Movie schlock, 'Species II' is a good bit of fun, but that's all. It's a guilty pleasure movie through and through and shouldn't be viewed with any lofty ideas or expectations for quality. As a movie of a late 1990s vintage, it has managed to date itself with an overuse of cheap weightless-looking CGI effects, however, the practical creature and gore effects are still pretty fantastic. So on that level, 'Species II' does have something to offer. As far as the franchise goes, the 'Species' series should probably have stopped here, but two more direct to video sequels would follow shortly after this film's dismal box office returns.

'Species II' arrives on Blu-ray in fine order with a strong 1.85:1 1080p image. At the outset of the film, there is a prevailing softness to the image that may make some fans worry a bit, but this is largely due to the opening scenes being comprised of numerous dated CGI effects that really could use an updated render. These effects just don't hold up under scrutiny. Thankfully, once the live action elements kick in, the film's image quality improves dramatically. With fine film grain still apparent, facial feature details and costuming and the space shuttle set become instantly apparent. This remains the case throughout the film in spite of some iffy CG effects work later in the film. Colors are bright and present allowing primaries to dominate a number of scenes, particularly blues as seen with the strategically placed harness straps during Eve's introductory shot. Reds also have a strong presence for obvious reasons. Flesh tones appear healthy and accurate. Black levels are deep and inky and avoid any serious crush issues allowing the image to have a nice dimensional quality. The real highlight to this transfer is how amazing the practical effects work looks on screen and how well they hold up after all these years.

With a DTS-HD MA 5.1 audio mix, 'Species II' has a strong, resonate, and squishy presence. With all of the blood, gore, creature goop and slop in this movie, this surround mix really goes to town bringing all of the viscus visceral audio effects to life. Dialogue is crystal clear and never in contrast with the score or the background elements. Imaging is particularly strong here as there are a number of moments where a creature effect or an action sequence traverses the channels in a nice organic sounding way. Screams of pain and terror keep the upper registers working a lot but don't spike the track in a way that requires you to adjust your levels. Even during the big - and loud - climactic battle with the Patrick alien monster, the mix feels well balanced and even. All around a clean and solid track that should please fans.

Audio Commentary: Director Peter Medak provides a solid commentary track detailing his involvement with the film, the casting, and working on the script. All around a solid listen.

From Sil to Eve: (HD 16:21) Actress Natasha Henstridge gives a solid interview about her experiences working on the movie and how it helped her start her career.

Creature Creations: (HD 28:48) So, if you're a creature effects or a gore fan and want to know how it all works and what went into creating the effects for this movie, you've gotta see this extra feature.

Alien Evolutions: (HD 19:00) This is an awesome interview with screenwriter Chris Brancato. It's a great interview, he details how and why he got into the industry and how he moved from television into feature films and becoming a producer of his own content and ultimately how he got to work on 'Species II.' It's a really funny when he discusses the reworking of the ending.

Special Effects Outtakes: (SD 13:32) This is rough cut workprint footage of the visual effects sequences. Some pretty great stuff and how really gooey some of the effects got.

Still Galleries: This is a collection of scene stills as well as behind the scenes pics as well as some pre-production concept images.

'Species II' can hardly be considered a "good" movie, but it is a fun one. The film made the choice for better or for worse to go dark and kick up the gore way beyond what was done for the first film. So on that level, there's at least something to see here. Scream Factory has done a pretty fantastic job putting this Blu-ray release together giving it a number of new extra features along with some from the original DVD release with a very strong A/V presentation. Fans of the film shouldn't hesitate picking this one up. If you haven't seen the flick in awhile or ever, consider this release recommended if you like your sci-fi/horror over the top with slightly questionable taste levels.

Sale Price 199.99
Buy Now
3rd Party 196
In Stock.
See what people are saying about this story or others
See Comments in Forum
Previous Next
Pre-Orders
Tomorrow's latest releases