Xu Lai had dreams once. To be an artist and marry the girl of his dreams. 15 years later, he's sick of designing bras, humoring his baby-crazy wife, and catering to loopy in-laws. But his upcoming family vacation, now including his DVD-pirating, aspiring-documentarian brother-in-law, has a hidden agenda: a chance meetup with his old flame. But ditching his clan for a clandestine hookup might be the least of his worries. There's been a murder, and his new hot pursuit might be from the cops who want a word with him. Written, directed, produced and starring veteran actor Xu Zheng (LOST IN THAILAND, BREAKUP BUDDIES), LOST IN HONG KONG is the hotly-anticipated sequel to the highest-grossing film in China's history. Also starring Zhao Wei (RED CLIFF, SHAOLIN SOCCER) and Bao Bei er (SNOW GIRL AND THE DARK CRYSTAL, THE FOUR), LOST IN HONG KONG is a raucous comedy of errors that proves truth is stranger than fiction, and while you might not have the life you planned, happy endings might turn up in the places you least expect.

Nailing the right tone is essential for any comedy. If your humor is too dark or too silly, you run the risk of alienating your target audience - especially if you're trying to make an action comedy. 'Lost in Hong Kong' from Writer, Director, and star Xu Zheng is a solid follow up to his previous effort 'Lost in Thailand' but because the humor can feel a bit dark and glum to some people, it may be tough to get into. On the other hand, if you're someone who enjoys a darker than average sense of humor, 'Lost in Hong Kong' should put a devilish smile on your face.

Nearly twenty years ago Xu Lai (Xu Zheng) was a bright-eyed art student with pie-in-the-sky dreams of becoming a world-famous artist. He had raw talent and even had the loving attention of the beautiful Yang Yi (Du Juan) to keep his artistic side inspired. Unfortunately, just when everything was going well for the two lovebirds, Yang was transferred to a school in Hong Kong and the pair fell out of touch. Time moved on and so did the heart-broken Xu Lai. Today he's not an artist but in fact, designs bras for a living. He's also married but to the baby-obsessed Cai Bo (Zhao Wei). Xu Lai tries to convince himself that he's happy in a loving marriage, but the fact that they haven't conceived a child has put a lot of strain on their relationship. But a vacation to Hong Kong visit Cai Bo's family may be the ticket he needs to spark up his dreary life.

Now that he's in such close proximity, Xu Lai takes the opportunity to look up Yang Yi and reconnect with his former flame. What should have been an easy meeting is sidetracked when Cai Bo's brother Lala (Bao Bei'er) tags along - with his video camera for a documentary project he's working on. At the same time, a murder mystery involving a world-famous movie director and a pair of corrupt police investigators puts another kink in Xu Lai's plans. What should have been a relaxing time and possibly a pleasant reunion for Xu Lai and Yang Yi quickly spirals out of control as the pair find themselves caught in one death-defying situation after another. 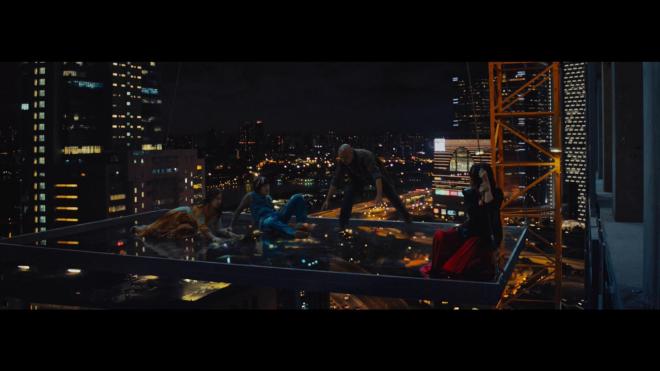 'Lost in Hong Kong' has a dark sense of humor. Not the sort of dark humor that makes fun of depraved acts or violence but instead is a movie whose humor comes from looking down at Xu Lai's life of mediocrity and how pathetic he appears. On the surface of things, Xu Lai's current life versus the one he planned for himself really isn't all that bad, it's just not the one that he wanted and it makes him depressed and sour to be around. That is what is supposed to be actually funny about this movie. Xu Lai's mediocrity and averageness and then his getting caught up in a murder plot is supposed to support the film's sense of humor. To be honest it took me quite a bit of time to get into the film's stabs at humor. This isn't really a movie that shoots for the easy belly laughs but instead aims for sustained chuckles as our lead characters get caught up in one awkward situation after another.

Depending on how you like your humor served to you, you're either going to love 'Lost in Hong Kong' or you'll end up thinking that it's just an okay action comedy. This is a movie that I can see a number of people not really taking to it because of the tone of the comedy. It's kind of hard to actually laugh at Xu Lai's home life so the first chunk of the film can feel a bit laborious. However, once the main story kicks in and Xu Lai and Yang Yi reconnect and their circumstances become more and more over the top, the film becomes a nice fish-out-of-water adventure comedy and even those people who weren't happy with the movie at the outset should come away charmed by this flick. It takes a little getting used to, but I enjoyed 'Lost in Hong Kong' and the flick put a nice smile on my face.

'Lost in Hong Kong' arrives on Blu-ray thanks to Well Go USA. Pressed onto a Region A locked BD25 disc, the disc is housed in a standard Blu-ray case and opens to trailers for other Well Go releases before arriving at the main menu featuring traditional navigation options. Like other Well Go Releases, if you start one bonus feature it will automatically play the next one.

With a 2.66:1 1080p transfer, 'Lost In Hong Kong' looks absolutely amazing with this Blu-ray release. Shot digitally, this is a bright, colorful, and sharply detailed image. Facial features come through clear and cleanly as does the scenery, production design and the costuming. The real stand out however are the art pieces scattered throughout the film as you can not only appreciate the amazing color pallet but also spot individual brush strokes in some of the paintings. Like I said, colors are bright and beautiful with a strong primary push that tends to favor yellow. That said flesh tones are stable and the rest of the image looks natural. Black levels are strong and provide the image a notable sense of three-dimensional depth. If there is a fault to be found in this transfer is whenever any CGI effects are employed, the sharper surrounding resolution tends to make these effects stand out more than they should and tends to flatten the image - but this is hardly a deal breaker as the rest of the transfer is simply gorgeous.

On the audio front, 'Lost in Hong Kong' sticks the landing with a flawless Mandarin DTS-HD MA 5.1 audio track with optional English subtitles. At the start of the film, it's a little on the quieter side as we're introduced to the various characters, but once the action kicks in, the full surround effect goes into high gear and never lets off the gas. When the track is quiet and conversational, there are tons of nice and simple atmospheric elements to keep the surrounds working and provide a sense of space. There are a few lower register beats to keep the track balanced so there isn't a constant high pitched tone once the film picks up speed. The mix feels well balanced throughout and I never once felt the need to adjust my volume. A perfect track, not much more can be said about it.

Making of: (HD 4:58) This is a collection of three segments that very briefly cover The Stunts, The Actors, and The Characters. It's a shame it is so brief because at just a few minutes long there really isn't any chance to get into much depth on any particular topic.

How well you take to 'Lost in Hong Kong' is going to depend entirely on your own personal sense of humor. If you don't mind the humor poking fun at a guy's simple lifestyle then you should be okay - especially once the main movie kicks in. I found this flick to be quite a bit of fun and a nice stretch of action-packed entertainment. Well Go USA has brought the film to Blu-ray with an exceptional image transfer and audio mix. Sadly the extra features are brief and lacking but the movie itself is worth it. Recommended.

Sale Price 11.73
Buy Now
3rd Party 10.39
In Stock.
See what people are saying about this story or others
See Comments in Forum
Previous Next
Pre-Orders
Tomorrow's latest releases