After five-year-old Jack and his mother escape from the enclosed surroundings that Jack has known his entire life, the boy makes a thrilling discovery.

We see it more often than we'd like on the news. A haggard young woman emerging from captivity after years of abuse by a vicious sociopath who lured her into his clutches and imprisoned her in a virtual cell. Such horror is unimaginable for most of us, yet its effects are equally severe, and often linger long after the victim's release. For many, picking up the pieces of their shattered lives and healing the mental and physical wounds so cruelly inflicted upon them is almost as difficult as escaping the torture they endured.

Joy (Brie Larson) fits this profile to a T, and in 'Room,' Lenny Abrahamson's affecting adaptation of Emma Donoghue's acclaimed novel, we witness her struggles from the inside out. Trapped for seven years in an oppressive square space and completely reliant on her captor for food, light, and warmth, Joy survives by her wits...and the skin of her teeth. She has no contact with the outside world except through a single miniscule skylight that yields little information other than weather and time of day, yet somehow she perseveres, with strength and resolve that belie her tender age.

She does, however, have something many in her same predicament do not - a little boy. He may be the progeny of her abductor, but five-year-old Jack (Jacob Tremblay) provides Joy with boundless comfort and companionship. More importantly, he gives his mother both something to live for and a reason to keep fighting. Joy tries to raise him as best she can under such duress, instilling in him a set of values and striving to create a sense of normalcy in a very bizarre environment. Many of us might say the world is our oyster, but to Jack, that tiny room is his entire world, and he's lived every day of his life within its cramped, stuffy confines.

The first half of 'Room' examines the pathetic, yet strangely magical existence of Jack and his Ma, and immerses us in their close, dependent relationship. Jack accepts and embraces his surroundings because they're all he knows, and despite the lurking threat of Old Nick (Sean Bridgers), the bearded man who "visits" Ma while Jack cowers in the closet, he feels happy and safe. But now, at age 5, his curiosity begins to challenge the universe Ma has so carefully constructed and manipulated, and his perception of it begins ever so slowly to change. Joy senses these subtle shifts and realizes he can't go on living in Room forever.

But has Joy done her job too well? Has she acclimated Jack so completely to Room he's unprepared for a normal life in the real world? That's the crux of the second - and far more interesting - half of 'Room,' which chronicles how Joy and Jack adjust both to freedom and the now fractured family a teenage Joy left behind on the day she was abducted.

Abrahamson does a masterful job drawing us into the Room environment and creating a mini world for his characters. He takes time developing their intimate bond, depicting their way of life, and outlining the forces that threaten them. Perhaps too much time. 'Room' is intriguing, but not riveting in its initial stages. And even when the story opens up, the pacing remains overly measured. Yes, this is a character-driven film that's comprised of subtle, telling moments - some of them beautifully presented - but it never connected with me emotionally like I expected it would. Too often, I felt like a spectator instead of a participant, as if I was looking into the lives of Joy and Jack from that tiny, telescopic skylight above Room. For much of the film, the two are detached from the world, and for much of the film, I felt strangely detached from them.

The actors, however, are not to blame. Every performance in 'Room' is perfectly pitched and utterly believable. Much has been written about Larson's Oscar-winning portrayal and all of it is true. Searing, heartfelt, raw, and revelatory are only a few of the laudatory adjectives that describe her work. She completely embodies her character, embracing all the attributes, faults, and complexities that define her, and transmits them with a breathtaking naturalness. And she creates such terrific chemistry with the young Tremblay it's almost impossible to believe they're not really mother and son.

Would she be as good without him? Who knows. Would she have won the Oscar without him? Tough to say. Few child actors possess such marvelous intuition and such a fierce command of their talent. Tremblay rarely makes a false move and never resorts to childish tricks to grab attention. He and Larson are a unit, and it's difficult to imagine either without the other. Joan Allen and William H. Macy as Joy's parents are equally fine, but this film belongs to Larson and Tremblay.

'Room' was a worthy Best Picture nominee, and Abrahamson and Donoghue deserved their respective nods for direction and adapted screenplay, but the film is far from a fluid experience. It's really two one-act plays stitched together, and the two halves don't always snugly interlock. Both have their merits and their faults, but the lack of cohesion and some convenient plot devices keep the movie from achieving maximum impact. 'Room' resonates, thanks to an array of exquisite nuances, and like many inspirational stories, it celebrates the resilience of the human spirit. It's easy to admire, but - at least for me - difficult to fully embrace. 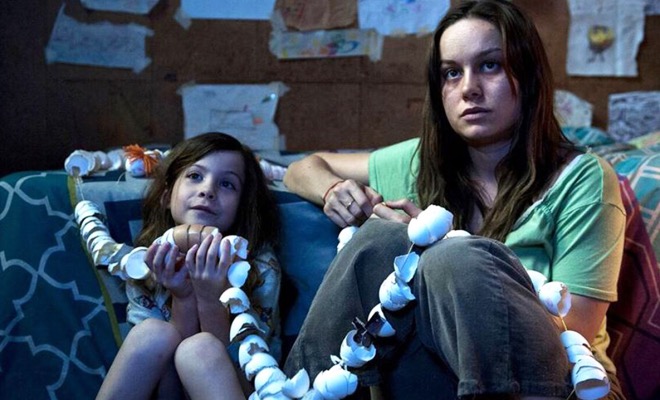 'Room' arrives on Blu-ray packaged in a standard case inside a sleeve. A leaflet containing a code to access the Digital HD Ultraviolet copy is tucked inside the front cover. Video codec is 1080p/AVC MPEG-4 and audio is DTS-HD Master Audio 5.1. Once the disc is inserted into the player, previews for 'Mississippi Grind,' 'The End of the Tour,' 'Remember,' 'The Spectacular Now,' and 'Amy' precede the static menu with music.

Stark and naturalistic, the 1080p/AVC MPEG-4 transfer from Lionsgate accurately renders Danny Cohen's cinematography, which at times lends this quiet film a documentary-like feel. Shot with digital equipment, the picture exhibits a necessary coolness that reflects the characters' surroundings and desperate dilemma, while the pristine source material helps draw us into their unique and shocking world. The palette is appropriately muted, but a few colors, such as the bold primaries of the Lego blocks, possess some pop, and detail levels acorss the board are strong. Blacks are rich and deep, whites are crisp, and flesh tones remain true and stable throughout. Some crush creeps into view during some low-light stretches in the film's first half, but that's understandable given the nature of the environment. Close-ups highlight facial features well, allowing us to really connect with the characters and feel the power of their emotions. A bit of noise crops up now and then (also during the film's first half), but no enhancements alter the organic nature of the presentation. 'Room' may not be a pretty film, but it's well shot, and this top-notch transfer honors the director's intentions.

The DTS-HD Master Audio 5.1 track isn't particularly showy - after all, 'Room' is a very intimate film - but it embraces the nuances and subtleties sprinkled across the mix. Clear, well-modulated sound predominates, and although surround activity is limited, some nice bleeding into the rear speakers at key moments heightens the film's impact. Good fidelity and tonal depth benefit the unobtrusive music of Stephen Rennicks, and all the dialogue is well prioritized and easy to comprehend. A wide dynamic scale handles all the highs and lows with ease, especially when the levels increase during Jack's initial exposure to the outside world. No distortion afflicts the track and no imperfections, such as hiss or surface noise, intrude. Though far from a demo track, this mix complements the narrative well and keeps us immersed in the film.

A few supplements take us behind the scenes of this intimate drama and shed some light on how it was made.

'Room' is a meticulously constructed, flawlessly acted film that taps into deep emotions about family, self-worth, parenting, perseverance, and survival. Director Lenny Abrahamson strikes just the right tone, wisely allowing the story to unfold without judgment or manipulation, and Brie Larson and Jacob Tremblay file revelatory performances that immerse us in their plight and relationship. Lionsgate's Blu-ray presentation features strong video and audio transfers and a few interesting supplements that shed additional light on this intriguing production. Though 'Room' drags in sections and might not appeal to all viewers, it tells an important, affecting story with sensitivity, power, and grace. Recommended.

Sale Price 13.69
List Price 19.99
Buy Now
3rd Party 2.67
In Stock.
See what people are saying about this story or others
See Comments in Forum
Previous Next
Pre-Orders
Tomorrow's latest releases