After a blatant terrorist attack on the Pentagon, and the resulting new war on terror, private military contractor Kyle Norris (Sizemore) facilitates the development of a bio-mechanical weapons program by Professor Clarence Peterson (Rourke).  The next-gen program allows soldiers to swap consciousness with a target, giving them temporary, yet complete, control.  While the program was intended to combat terrorists and safe guard American soldiers, abuse has been rampant.  Enter down-and-out Detective Walker (Messner), who unwittingly stumbles upon the failing bio-weapons program, and he's forced to fight to both shut it down and protect his young family from those who'll stop at nothing to keep things moving forward.

As film has proven time and time again, a good idea isn't enough to make a movie actually good. A film not only needs to have a strong script, but also a talented cast, an editor who knows what they're doing, and a director who has a sense of how to manage all of these elements and the material. In the case of 'Weaponized' starring Johnny Messner, Tom Sizemore, and Mickey Rourke, the film never comes together under the direction of Timothy Woodward Jr., and because of a confusing structure and the frequent dropping of plot points, the film is nearly incomprehensible.

Kyle Norris (Tom Sizemore) is a brilliant scientist and military contractor. His company runs a pretty brisk business, and he does what he can to maintain a strong relationship with his son who works at the Pentagon. On July 4th, 2017, everything changed for Kyle when the Pentagon was attacked, killing his only son. Now with a personal stake in the fight, Norris has partnered with Professor Clarence Peterson (Mickey Rourke) to create the ultimate weapon - a soldier who isn't a soldier, a killing machine without any training who is, in fact, being controlled remotely. When the program goes bad and there is a mass shooting at a restaurant, Detective Walker (Johnny Messner) is put on the case. When the suspect goes from claiming total innocence to stating outright responsibility and then kills himself while in Walker's custody. Walker and his partner Detective Ross (Cullen Chambers) have inadvertently stumbled upon the next phase of the war against terrorism - but the program itself may be too unstable and uncontrollable risking more lives than it actually saves.

'Weaponized' is a movie that sets itself up as a more action-oriented take on 'The Manchurian Candidate' where a simple person with little to no fighting experience or combat capabilities can be made a weapon. It's a pretty solid idea but unfortunately, the film is entirely too confusing about what is happening when, where, and to whom, and all suspense and sense of interest are lost. Just when it feels like the movie is going to ground itself and allow the audience to at least grab onto a piece of the puzzle, the film cuts away to something else entirely. I don't think I've had to rewind a movie this much before as I tried my best to keep on track with things. Once Messner's troubled Detective Walker enters the scene and starts digging into what is going on, the film does manage to even out a bit, but the opening twenty minutes doesn't feel like it actually connects with anything that is now happening. Then some more twists come about and the film loses focus all over again. 'Weaponized feels like a movie that is a mashup of a lot of decent ideas but doesn't make a coherent film. 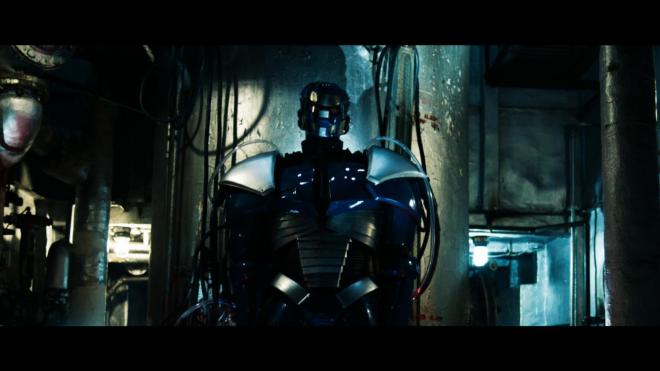 Part of the problem with the film is that the movie hinges on very real and current issues of domestic terrorism, but it doesn't handle the material with any real sense of responsibility. This is a very real fear that people have and is a driving force in modern politics and the kid-glove approach 'Weaponized' handles this material with is more than a bit disconcerting. Compounding this problem is using veterans as "weapons." I don't know if the movie is trying to punch in some sort of PTSD angle or not, but when a soldier played by the director Timothy Woodward Jr. goes "berserk" and starts shooting up a restaurant to assassinate a U.S. senator, you have to start questioning the film's ethics.

As I said at the outset, 'Weaponized' has some pretty decent ideas, but how it brings things together is either completely mishandled, inappropriate, or completely wasted. Is it a suspense thriller? Is it a war film? Is it a police procedural? Are people the only ones being controlled or is it just the big robot monster that shows up late in the second act? At times, it's all of these genres and it's never very clear what is happening or why for long stretches of the film. It's also hard not to feel like something is off when a film starts to actively find justifications for killing innocent people or politicians in order to support an agenda. Granted, we're not supposed to like the reason's why things are happening, but more often than not, the film seems to be determined to support these notions. Considering some of the talented individuals on screen it makes you wish this film had taken a moment or two to consider what it was trying to say or do than it ultimately did. As toss away entertainment, this movie does manage to hold some momentum, but it never pays off in the way that it should.

'Weaponized' arrives on Blu-ray thanks to Cinedigm and is pressed onto a Region A locked BD25 disc. Housed in a standard Blu-ray case, the disc opens to trailers for other Cinedigm releases before arriving at the main menu featuring standard navigation options.

With a 2.35:1 1080p transfer, 'Weaponized' is given a clean and detailed HD image. Shot digitally, the image features plenty of pleasing detail levels allowing you to appreciate costuming, the film's sometimes impressive production design, as well as facial features, including the inexplicable bandage on Mickey Rourke's nose. Colors are also bright and lively allowing for a strong primary presence with stable flesh tones. Black levels are deep and inky ensuring that the image has plenty of depth to it without any blown out contrast levels or crush issues. Where the transfer falters a bit is with the film's usage of CGI. Granted, this isn't necessarily a transfer problem, but the heightened detail levels make these effects moments stand out like a sore thumb in an arm wrestling contest. That said, 'Weaponized' looks pretty darn good on Blu-ray.

Packed with a DTS-HD MA 5.1 audio track, 'Weaponized' actually features some solid audio elements building an immersive experience. As most of the film is on the quieter side and more conversation focused, dialogue comes through crystal clear and, for the most part, keeps to the center/stereo channels. The sound effects work well to create a nice sense of dimensionality and atmosphere helping some of the confined spaces and close intimate sequences feel like there is real space in the audio mix. Imaging works pretty well allowing for a nice sense of direction and there is plenty of channel movement to keep the track interesting. Levels are also on point as the track handles the highs and lows well without needing any volume adjustment.

Five Deleted Scenes: (HD 2:34) There really isn't much here to feel like you're missing anything from the movie. I was hoping some of this material would offer a little more connective tissue so that some coherency could be found in the film, but it's not with these short scenes.

'Weaponized' is a movie that conceptualizes the idea that anyone could be a weapon through technology. This is a creepy and relevant concept, but sadly the film never capitalizes on its ideas. The film is overly confusing, tough to understand in some places, and just never really comes together in a way that works. Cinedigm has brought the film to Blu-ray with a strong A/V presentation but the extra features are relatively slim. 'Weaponized' is a worthwhile rental and that's about it.

Sale Price 8.87
List Price 14.93
Buy Now
3rd Party 7.47
In Stock.
See what people are saying about this story or others
See Comments in Forum
Previous Next
Pre-Orders
Tomorrow's latest releases