From Paolo Sorrentino, the director of Italy's Oscar foreign language winner The Great Beauty* comes Youth, about two longtime friends vacationing in the Swiss Alps. Oscar winning actor Michael Caine plays Fred, an acclaimed composer and conductor, who brings along his daughter (Rachel Weisz) and best friend Mick (Harvey Keitel), a renowned filmmaker. While Mick scrambles to finish the screenplay for what he imagines will be his last important film, Fred has no intention of resuming his musical career. The two men reflect on their past, each finding that some of the most important experiences can come later in life.

"You're only as old as you feel" is a common platitude in movies. It usually works as a setup to a film about middle-aged or elderly people who have led complacent lives, but all of a sudden find the wellspring within themselves to go out there and lead a happy active life once again. There have been countless dramas and comedies that have fallen into this category. Some are perfectly good and provide some entertainment value, while others are trite and fail to do anything meaningful with the material. 'Youth'. starring Michael Caine, Harvey Keitel, Rachel Weisz, and Paul Dano, and directed by Paolo Sorrentino, is a film that attempts to tie the notions of art and creativity into the feelings of youth and vitality, but unfortunately, sacrifices characterization in favor of exploring a theme.

Famed composer Fred Ballinger (Michael Caine) lives in a secluded resort deep in the French Alps. His days are quiet and that's the way he wants to spend his retirement. When he isn't gone on walks, he's dealing with his remaining few business affairs that his daughter Lena (Rachel Weisz) takes care of. He spends his meals and spa treatments with his long-time best friend Mick (Harvey Keitel). Lena is married to Mick's son Julian (Ed Stoppard) making the two in-laws as well as best friends.

Where Fred is content to live his life in retirement believing that his best years are behind him, Mick believes the opposite. As a famed filmmaker, Mick is determined to make another film starring his longtime muse Brenda Morel (Jane Fonda). Because of his legendary status as a filmmaker, Mick has been able to woo a host of groupie filmmakers to work on the screenplay who refuse to acknowledge that Mick's best years as a writer and director have already passed him by. Fred, on the other hand, has to deal with a wormy sort of man, the Queen of England's Emissary (Alex Macqueen) who is insisting that Fred come out of retirement for a performance of his acclaimed "Simple Songs" compositions.

While Fred is torn by the prospect of conducting an orchestra once again, he befriends a young actor named Jimmy Tree (Paul Danno). Jimmy is trying to get a handle on a new part for a film that he is set to star in, but he's finding the material unwieldy. Also weighing on Fred is the fact that his daughter's marriage is dissolving, and old family secrets, including why he hasn't conducted an orchestra or composed a piece of music come to the surface. As each character tries to come to grips with their own artistic sense, they'll also learn that their sense of age and vitality are intrinsically linked. 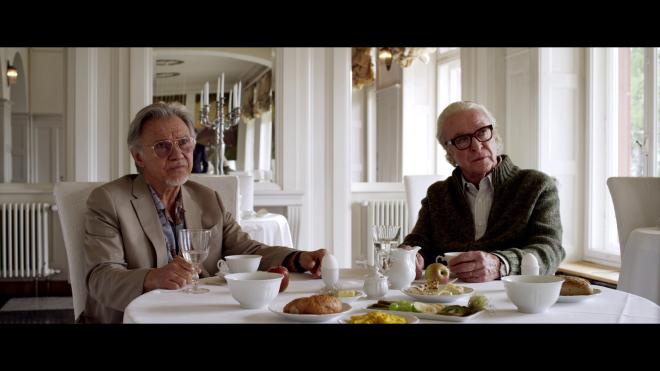 'Youth' tries to say an awful lot about life, art, and vitality, but at the same time, its meandering pace and insistence on constantly reiterating its central theme keeps its audience at a distance. The film starts out earnestly enough as a very endearing comedy drama about two old friends, one retired, the other determined to prove that his work is still relevant. Together Fred and Mick try to figure out their place in a world that has either forgotten about them entirely or only wants them for the works of art they created. Michael Caine and Harvey Keitel are wonderful in these rolls, and the pair displays a genuine sense of chemistry that makes you believe that they've known each other for decades. Unfortunately, when the film tries to juxtapose their relationship against the younger characters of Paul Dano's Jimmy and Rachel Weisz's Lena, the film loses a lot of focus. While their characters do offer up some fantastically dramatic scenes with amazing performances, their weight or importance just doesn't amount to much in the end and feel like prolonged distractions.

Like it's central characters, 'Youth' just doesn't feel like it knows what it wants to be. Is it a comedy? Is it a drama? A combination of the two? While it's beautifully crafted and the relationships that stem from various characters meeting and interacting feel genuine, the film ends up feeling too crafty and artistic to bring the material home in a satisfying way. By the time we learn why Fred won't conduct an orchestra, even at the Queen's insistence, or why Mick isn't likely to get another film off the ground, it feels like the film has traveled a long and winding road to go a very short distance. 'Youth' is a beautiful looking film with some amazing performances, but it still may leave some people feeling unsatisfied.

'Youth' arrives on Blu-ray thanks to 20th Century Fox. Pressed onto a Region A locked BD50 disc, the disc is housed in an eco-friendly Blu-ray case with identical slipcover. Also included is a Digital HD redemption voucher. The disc opens with a series of trailers before arriving at an animated main menu featuring standard navigation options.

'Youth' arrives on Blu-ray with an absolutely exquisite looking 2.39:1 1080p transfer. Shot digitally, this is a breathtaking looking image with impressive detail levels that captures all of the beauty of the scenic mountain locations while also allowing you to appreciate the impressive set design work, the intricate costuming, as well as fine facial features. Colors are vivid and gorgeous looking allowing primaries to have plenty of pop and presence while also keeping earth tones prominent. Black levels and shadows are inky and clearly defined giving the image a strong sense of three-dimensional depth. Darker, night scenes don't have any issue with crush as there is just enough warm lighting and shadows to help maintain that sense of depth. At the end of the day, this is a virtually flawless image transfer.

'Youth' also comes with a rich DTS-HD MA 7.1 audio mix. As a film that is largely quiet and conversational, the film makes an incredible use of background effects and ambient sounds to fill out the track. It's incredibly subtle but the surround channels are constantly engaged giving the track a fantastic sense of space. Dialogue is crisp and clear and keeps to the front/center channels. The amazing score by David Lang fills out the mix beautifully without intruding on sound effect elements or the dialogue. As the track largely keeps to the midranges, levels rarely spike or lull so there isn't any need to monitor your volume. All around this is a fantastic mix that fits the nature of the film perfectly and pays off for the final performance piece.

Promotional Featurettes: (HD 17:43) This is some pretty basic EPK material featuring interviews with the cast and crew discussing the film. There's not a lot here, to be honest as most of these features just cover the basics.

Gallery: (HD 2:05) This is a collection of stills and behind the scenes pictures.

'Youth' has a lot to say, but unfortunately, it spends so much time on various thoughts and ideas that the film ultimately loses a sense of character and can feel too long for the point it is trying to make. It's still worth watching for the incredible performances, but it may not be the film many people are hoping to see. 20th Century Fox has brought 'Youth' to Blu-ray with a beautiful and striking image transfer and a subtle but impressive audio track to match. Extra features are a little on the lean side. 'This is worth a look.

Sale Price 12.95
Buy Now
3rd Party 12.95
In Stock.
See what people are saying about this story or others
See Comments in Forum
Previous Next
Pre-Orders
Tomorrow's latest releases