Overview - An American military advisor embraces the Samurai culture he was hired to destroy after he is captured in battle.
OVERALL
Recommended

'The Last Samurai''s greatest strength may also be its fatal flaw. It dreams of being a lofty, grand movie spectacle of yesteryear, the kind "they don't make anymore." Yet even if it knows all of the right words to say, and the perfect pictures to paint, it never masters the poetry of its motions. It is almost as if you can picture ex-television director Edward Zwick commanding the set with his Master Filmmakers Playbook, caressing the air with his hands and directing his phantasmagorical masterpiece with visions of Oscar dancing in his head. But while we applaud Zwick for even attempting to hark back to the work of the true greats of epic moviemaking -- the David Leans, Akira Kurosawas and John Fords -- we also can't help but begrudge 'The Last Samurai' for failing to measure up to such unattainable standards.

The story is the archetypal tale of a hero's journey gone awry -- he who will trespass into a forbidden culture, only to emerge transformed and redeemed. In late 19th century Japan, American war captain Nathan Algren (Tom Cruise) must lead a group of Japanese soldiers to defeat a rebellion of the countries that remain Samurai. But before you can say "Dances with Wolves," Algren is captured and imprisoned by his enemy, a culture he came to destroy but will soon pledge his allegiance to. Befriended by the sage warrior leader Katsumodo (an excellent Ken Watanabe), and fighting a forbidden attraction to the widow (Koyuki) of a Samurai he'd executed, Algren finds himself spiritually transformed by the forces he once swore to destroy. But soon the Japanese forces will begin again their search for Algren and the Samurai -- ready to destroy the warrior culture, and anyone else who stands its way.

'The Last Samurai' is a film I found easy to admire but hard to love. It's tough to say why the film didn't stir in me the same emotions as a 'Dances with Wolves,' a 'Seven Samurai' or even a 'Star Wars.' Zwick certainly goes for the grandiose, but everything is a bit too serious, a bit too overlong, a bit too desperate to impress. By drenching everything in big, cinematic moments and pumping up every emotion, Zwick doesn't transcend his influences, but instead reminds us that he's trying to emulate the masters. Like Algren, Zwick seems like a student still in training. Perhaps that is what I find lacking in most of today's technically-adept filmmakers, the "movie brats" who came out of television and film schools. Where's the cinematic sensibility informed by real life experience and in immersion in the culture? Imitation may be the sincerest form of flattery, but it also isn't particularly original.

That said, 'Last Samurai' is still a very entertaining movie -- it's filled with tons of loud sword fights, panoramic vistas, Very Important Dialogue and slo-mo shots of Tom flashing his sullen, toothy grin. And it certainly is a handsomely-mounted epic, with polished direction by Zwick, top-notch production and costume design, and strong performances by its largely Japanese cast (particularly Watanabe, who earned an Oscar nom for his role as Katsumoto). But aside from feeling a bit too close to 'Shogun' meets 'Dances with Wolves,' I just never once believed Cruise as Algren. Of course, I'm biased, as 'The Last Samurai' now hails from the era now know as "Tom Cruise, B.C." As in, "Before Couch-Jumping." Everything changed after that seismic pop culture shift, and I am not alone in now having difficulty separating the actor, however talented, from all of his recent shenanigans. Still, while I suspect that Zwick had hoped it would add up to a lot more, I have to give 'The Last Samurai' its due -- both for its well-meaning politics and as a highly effective, incredibly tasty bucket of Hollywood popcorn entertainment. 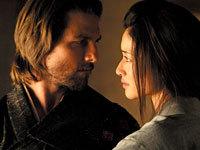 Wow, talk about a case of deja vu. 'The Last Samurai' was the very first next-gen title I reviewed, way back in April 2006, when something called HD DVD first debuted. So doing this Blu-ray comparison, even only a mere nine months or so later, I had to wonder how it well it would all hold up. But no need to worry. Another of Warner's direct HD DVD-to-Blu-ray ports -- same 2.40:1 widescreen 1080p/VC-1 transfer, identical bitrate and all -- the presentation is still up there with the better recent releases on either format, and is not to be underestimated because it's simply a "rehashed" master.

Much of 'The Last Samurai's striking cinematography retains the power to greatly impress. The panoramic vistas and lavish production design can be breathtaking -- the kind of three-dimensional imagery you rarely see outside of the cinema. Colors have plenty of pop, with lots of deep oranges and lush greens amid the Eastern locales (it was actually shot in New Zealand, but that's the magic of moviemaking). Hues are rich and saturated but not noisy or unstable. Fleshtones are also accurate, aside from a slight bluish cast in the brutal, gory action scenes, though that appears intentional. Blacks are also rock solid and contrast is excellent, with no overpumped, blooming whites to give the transfer an artificial quality. The lack of edge enhancement or compression artifacts remain impressive for one of the very first next-gen releases. And, given that this Blu-ray version is an exact replica of the HD DVD release, it should come as no surprise that there is zero detectable difference between the two.

'The Last Samurai' on HD DVD featured a Dolby Digital-Plus 5.1 surround track encoded at 640kbps, which again is mirrored here on the Blu-ray with the same mix, only sans the "Plus" moniker. And it is still a great, even stupendous mix, one that could easily serve as demo material in even the best home theater.

Dynamic range is powerful throughout the entire film, enlivened by very deep bass, particularly during combat sequences. The fine score by Hans Zimmer has a pleasing tonal quality, still sounding warm and human despite the often bombastic sound effects. Surround channels are also used to often powerful effect from the very beginning, from discrete sounds to minor atmospheric effects, such as the almost gothic amount rain, thunder and gunshots that seem to build and build in loudness, especially during the second half of the movie. Dialogue remains dead center in the mix, and perfectly balanced, so thankfully I wasn't constantly reaching for the volume control on my remote. Sure, a lossless or uncompressed mix would have been fabulous (perhaps Warner will get around to reissuing this again someday), but as is, 'The Last Samurai' still cranks. 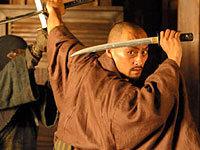 Warner has ported over all of the supplements from the standard DVD and HD DVD releases of 'The Last Samurai,' so nothing here will surprise anyone who is familiar with previous versions of the title.

First up is the audio commentary with director Ed Zwick. Certainly, he is an articulate, knowledgeable guy, although, to be honest, I have not been a fan of most of his DVD tracks. He typically comes off as dry and humorless, and no exception here. But he does cover just about every last production detail, from staging the fight scenes to working with a star of Cruise's magnitude (who, as Zwick makes abundantly clear, had approval over just about every aspect of the film). I won't lie and say I didn't find it hard not to nod off during this one, but in terms of sheer information, Zwick doesn't disappoint.

The video-based supplements kick off with the 21-minute History Channel Documentary, "History vs. Hollywood: The Last Samurai," which delves into the historical facts behind 'Samurai's fiction. Unfortunately, I didn't think this one was as strong as most of the History Channel's other movie-inspired specials, coming off as largely promotional with little in the way of historical grit. Maybe Cruise help edit this one, too?

Next up are three longer featurettes that focus on director Zwick and star Cruise. "Edward Zwick: A Director's Video Journal" runs 26 minutes as is an assemblage of on-set diary footage narrated by Zwick and Cruise; the 12-minute "Tom Cruise: A Warrior's Journey" tracks Cruise as he undergoes sometimes grueling preparation to effectively portray a Samurai warrior; while the 17-minute "Making an Epic: A Conversation with Edward Zwick" is just that -- a one-on-one interview with the director, which is largely redundant with the audio commentary.

Ironically, it is a series of three short 5- to 7-minute featurettes that round out the supplements that I enjoyed the most, if only because they are free of the Zwick-Cruise back-patting. "A World of Detail: Production Design with Lilly Kilvert" shows us how the sets were built; "Silk and Armor: Costume Design with Ngila Dickson" examines the costuming; and "Imperial Army Basic Training: From Soldier to Samurai: The Weapons" dissects how the film's battalion of extras were drilled in combat and tactical maneuvers. All are nicely done, laudatory towards the often unsung production heroes of big-budget spectacles like this, and loaded with lots of nice on-set behind-the-scenes footage.

The major supplements finish out with a couple of deleted scenes that run about 5 minutes, with or without optional Zwick commentary. Unfortunately, they are pretty short and hardly thrilling.

Finally, there are a few minutes of promo footage from the film's twin premieres in Tokyo and Kyoto, and the Theatrical Trailer in widescreen 480p standard-def video.

It's not my favorite film from either Edward Zwick or Tom Cruise, but 'The Last Samurai' is an engaging epic which definitely delivers in terms of great home theater demo material, with beautiful visuals and a top-notch soundtrack. On that level alone, it is worthy of consideration. An easy recommend for fans of the film.

Sale Price 2
List Price 9.98
Buy Now
3rd Party 9.87
In Stock.
See what people are saying about this story or others
See Comments in Forum
Previous Next
Pre-Orders
Tomorrow's latest releases