The Hateful 8 is set 6 or 8 or 12 years after the Civil War in wintery Wyoming, and a blizzard is coming.  Bounty Hunter John Ruth is trying to get his bounty, Ms. Daisy Domergue (Dah-mer-goo), to the town of Red Rock where she’s scheduled to be brought to justice.  Along the way he and his wagon driver Olie pick up two strangers; another bounty hunter and former union soldier, Major Marquis Warren, and a former southern renegade who claims to be the new mayor of Red Rock, Chris Mannix.  The impending storm has forced them to stop at Minnie’s Haberdashery, a stagecoach stopover on a mountain pass. When they arrive at Minnie’s, they are not greeted by the proprietor but by four strangers.  As the storm takes over the mountainside cabin our eight travelers come to learn they may not make it to Red Rock after all…

In many respects, if not in the entirety of the film, 'The Hateful Eight' is the standard, even typical Quentin Tarantino flick — so common and familiar a style that the phrase "Tarantinoesque" has caught on. This means, the movie is carefully crafted and designed to both subtlety and unabashedly play homage to the creator's unique proclivities and penchant for classic genre fare. Only here, he outdoes his own brand of filmmaking by saturating the eighth motion picture of his career — a fact proudly and prominently promoted in conjunction with the film's title — with more elaborately stylized dialogue and exposition before erupting into a massive display of senseless violence. In fact, the entire first half (literally) of the 167-minute movie is beleaguered with seemingly nonsensical chitter chatter and gossip, starting with the first four of eight main characters riding in a stagecoach. The tightly confined setting is in reference to John Ford's 1939 classic with John Wayne where eight different strangers and the driver are brought together by circumstance.

Samuel L. Jackson and Kurt Russell star as bounty hunters Major Marquis Warren and John "The Hangman" Ruth, two notorious figures of the West with legendary stories that seem to surpass their actual personalities, but which they nonetheless use to their advantage. And ultimately, that is precisely at the heart of this mystery western written by Tarantino, which originally started as a sequel idea for 'Django Unchained' but metamorphosed into a live stage reading and later evolved into a script. On the surface, we have a fairly simple and straightforward plot with Ruth chained to the deadly outlaw Daisy Domergue (Jennifer Jason Leigh in a marvelous, standout performance), whom he's taking to Little Rock where she'll be sentenced to hang by the new sheriff Chris Mannix (Walton Goggins). As fate would have it, a blizzard forces the four passengers to find refuge at Minnie's Haberdashery, a rundown and rickety shop in the middle of nowhere that offers food and shelter for weary travelers. Customary to Tarantino, this is where the story makes a sharp left turn. 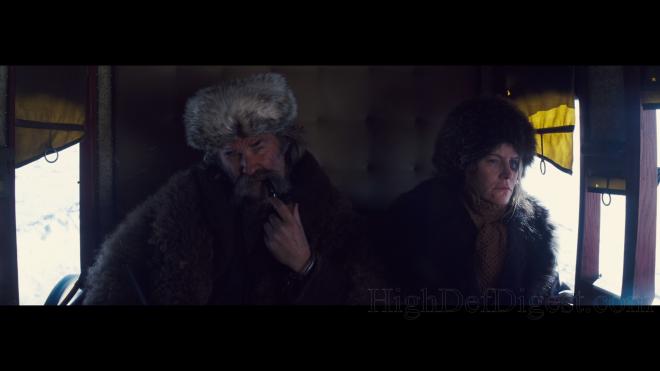 At the slopshop, we're introduced to four more characters running at the mouth and even more blathering where it slowly becomes apparent the parleying of these no-good varmints adds up to a sum greater than its parts. And believe me, the individual parts are quite amusing on their own, but when viewed as a whole, they stitch together a very interesting yarn. (Yes, that's a pun hinting that the gathering inside a haberdashery is no coincidence, but as deliberate on the part of its creator as it is fateful for the characters.) Tim Roth is a chatty Cathy as Oswaldo Mobray, the hangman hired to execute Daisy in Little Rock, and Demián Bichir is gruffly, rasping Bob the Mexican, who lets out cranky disapprovals beneath his wooly, bearded breadth. On the other hand, Michael Madsen as Joe Gage is a cow puncher who keeps to himself, writing in a diary, while Bruce Dern is grumpy Confederate General Sanford Smithers who prefers the company of the fireplace. Each of them comes with interesting stories and backgrounds to share, which they do in this cramped space.

In this confined but open room that nonetheless feels congested with hyper-machismo and a thick air of unshakable resolve, it doesn't take long for tensions to soon escalate in 'The Hateful Eight.' However, this is still a deliberately slow build-up, a potboiler in the vein of an Agatha Christie mystery but set in the western frontier, at the border of civilization vs wilderness and justice/law vs vigilantism/anarchy, which is a notion ironically philosophized by Roth's hangman. But Tarantino also places a great deal of attention on the stories that either follow certain characters or are told by others, which makes their reliability highly questionable and in need of confirmation, such as the nail-biting confrontation between Marquis and Smithers immediately following doubts of the major's letter from President Lincoln. With some artfully placed political undertones writhing beneath each fruitful conversation, the relatively straightforward plot of Domergue's violent escape boils down to the tall-tales we tell, the stories and rumors separate from one's true personality and living up to them. 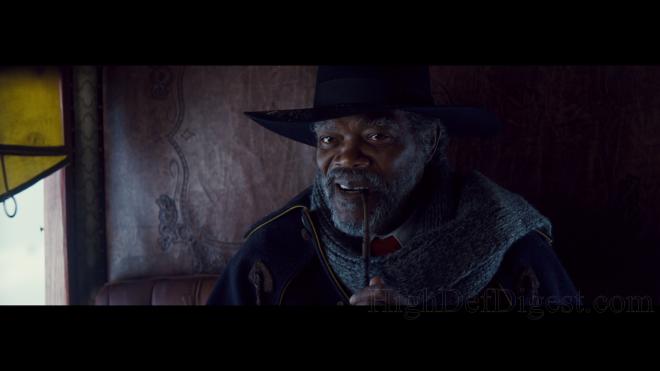 Anchor Bay and The Weinstein Company bring 'The Hateful Eight' to Blu-ray as two-disc combo pack with a code for an UltraViolet Digital Copy. Housed inside a blue, eco-elite case with a gatefold-style slipcover and joined by a DVD-9 copy on the opposing panel, the Region A locked, BD50 disc commences with a couple skippable trailers before switching to a menu screen with full-motion clips and music playing in the background.

Shot entirely on glorious Ultra Panavision 70mm film, Quentin Tarantino's eighth motion picture debuts on Blu-ray with a dazzling beautiful, reference-quality 1080p/AVC MPEG-4 encode. Immediately apparent, since it opens with a cool shot of an aged wooden crucifix against a snowy background, crisp, intense whites pop off the screen thanks to spot-on, pitch-perfect contrast levels. Even the whites of characters' eyes, shirts and porcelain jars on the shelves of Minnie's stick out from other darker items around. It goes without saying that precise brightness levels help in all this, filling the entire frame with rich, full-bodied blacks that give it a lovely three-dimensional feel. Shadows penetrate deep into the screen without ruining or obscuring anything in the darkest portions. The palette is somewhat restrained and controlled, favoring amber earth tones. However, primaries appear accurate and animated while other hues provide warmth and strong flesh tones.

Presented in its original 2.76:1 aspect ratio, the freshly-minted transfer displays razor-sharp details from beginning to end, revealing the tiniest object in the far distance and unveiling every nook and cranny inside Minnie's Haberdashery. Every labeled jar and bottle on the shelves in the back wall and darkened corners is plainly visible, and the smallest imperfection, scratch and spot along the wooden supports, tables and surrounding furniture is perceptible. Whether it's the scraggily mane on Jennifer Jason Leigh or the long whiskers Kurt Russell is sporting or the fur collars of the many thick jackets, individual hairs are distinct and separate from one another. Heck, even every granule and flake of the snow shimmers in the light in such a way as to make them discrete from each other. Not surprising, facial complexions are continuously stunning and lifelike, exposing every wrinkle, furrow and negligible blemish in the faces of the entire cast. With an ultra-fine layer of grain washing over the entire image, the presentation is beautiful and sure to please.

Complementing the awesome video, the mystery western arrives to town and wreaks bloody havoc with an awesome DTS-HD Master Audio soundtrack that won't exactly rock the house but will nonetheless impress. The design isn't the type to blow listeners off their seats in the tradition of the typical action flick, but rather, this is a very subtle audio mix that incorporates very refined sounds for setting a mood and creating a larger, realistic soundscape.

Considering this is a heavy character-driven drama, a great deal of attention is understandably focused on the fronts where the soundstage feels broad and expansive, producing a wide sense of space. Vocals are crisp and distinct so that we can hear and enjoy every expletive, insult and tall-tale. Channel separation is excellent with splendid, amazingly believable movement across the screen, delivering superb clarity and warm fidelity in the mid-range. The low-end is notably deep and throaty, providing depth and presence to each gunshot, thunderous yell and the howling winds. Immediately impressive is Ennio Morricone's exquisite and award-winning score, exhibiting squeaky-clean, sharp detailing and marvelous differentiation between the various notes and instruments.

In spite of the focus being placed on character interactions, the lossless mix also boasts awesome directionality in the surrounds, which are surprisingly and consistently active from start to finish. During exterior sequences, especially with those involving the blizzard, the room predictably comes alive with the terrifying roars and bellows of an approaching storm. The track delivers as expected in these moments, but even more amusing is how engineers incorporated those same noises, along with a few others, for the interiors. Though a bit quieter to allow voices to take priority, the scenes are nonetheless energized by the ominous howls and shrieks of an impending and violent tempest, threatening to break through the rather flimsy, rattling wooden walls. The noise is continuous and all around to generate a terrifically satisfying 360° soundfield that enlivens each conversation with suspense. Take for example the richly tense back and forth between Warren and Smithers in which the storm slows but begins to build again while Bob plays the piano.

Overall, it's an excellent audio mix fans of the movie and audiophiles everywhere will surely love.

Although it feels like the standard, even typical "Tarantinoesque" flick, which might make it a chore for some while a pleasure for others, 'The Hateful Eight' nonetheless is a clever murder mystery wrapped in a western setting. With a large ensemble cast and excellent performances all around, Tarantino's eighth motion flick is not quite on par with his two previous efforts, but it's a strong and entertaining potboiler that should satisfy Tarantino fans. Shot in glorious Ultra Panavision 70mm, the Blu-ray arrives with a reference-quality audio and video presentation, but sadly, supplements are in short supply. Still, the overall package is recommended.

Sale Price 10.49
List Price 14.99
Buy Now
3rd Party 14.99
In Stock.
See what people are saying about this story or others
See Comments in Forum
Previous Next
Pre-Orders
Tomorrow's latest releases