Cult icons John Saxon, Dennis Hopper and the legendary Basil Rathbone star in this sci-fi cult classic! In the distant future, scientists receive a distress call from an alien spaceship that has crash-landed on Mars. Dr. Farraday (Rathbone, Tales of Terror) decides to send a team of astronauts, including Allan Brenner (Saxon, Enter the Dragon) and Paul Grant (Hopper, Easy Rider), on a rescue mission. On the planet, they discover a sole survivor: a green-skinned female alien (Florence Marly, Dr. Death Seeker Of Souls). The seductive alien is brought aboard their ship, but soon the horror begins after one man is attacked and dies, drained of his blood. The Queen of Blood is thirsty for more human victims, and as the astronauts try to find their way back to Earth and safety, the Queen s bloodlust has just begun.

Creativity goes a long way towards making a film great. Sometimes that creativity is found within the inspiration for a screenplay, a unique and interesting concept that could light up the screen. Sometimes it's a bit of inspirational casting that sees a team of actors and actresses cast against type. Sometimes it's none of these elements. Sometimes creativity comes from a penny-pinching producer who knows how to take a random piece of material, transform it, and make it his own.

1990 is an exciting time for humanity. After receiving the very first extraterrestrial communications from outer space. Dr. Farraday (Basil Rathbone) is the man who has been able to decipher the message and has become a de facto emissary for Earth as the aliens are sending their own representatives. When the Alien craft encounters trouble on its way to Earth, the alien delegation ends up crash landing on Mars. With only a faint radio signal, Dr. Farraday has no way of knowing if there are any survivors on the red planet, but that isn't going to stop them from mounting a rescue mission.

Fearless astronauts Allan Brenner (John Saxon), Laura James (Judi Meredith), Anders Brockman (Robert Boon), and Paul Grant (Dennis Hopper) fly off to Mars without any clear idea where the alien craft could have landed. When all hope of saving the delegation is nearly lost, Allan figures that the craft could have landed on one of Mars' moons. With his hunch proving right, Allan is able to retrieve an unconscious alien woman (Florence Marly). Every attempt is made to feed the alien woman, but what the crew has to offer isn't what the Queen of Blood actually craves, she wants something a little juicier and comes in the color red. 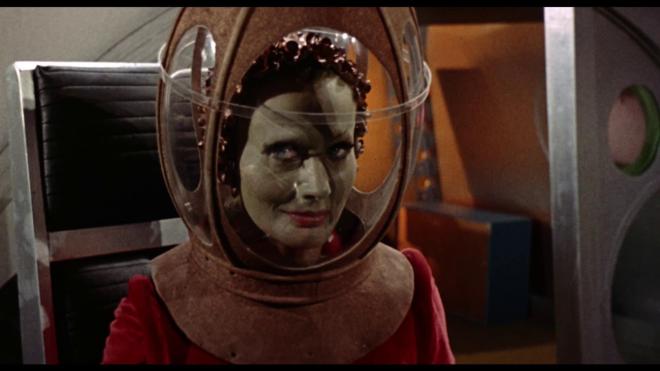 You got to love a producer like Roger Corman, the guy knows how to make a movie… or rather make a movie out of another movie. Much like Corman's release of 'The Magic Voyage of Sinbad,' 'Queen of Blood' is a hodgepodge of a Russian-produced film that has been re-edited, re-dubbed, or in this case reshot to make a film for American audiences. Corman was well known for his ability to take foreign material and make something else out of it. While there is something ingenious about this approach to repurposing foreign films, it also highlights Corman's knack for stretching a budget. There is no better evidence of this than the fact that Cyrillic letters CCCP are clearly visible on the side of what is supposed to be an American-made spaceship.

The last time I saw 'Queen of Blood' was the better part of 25 years ago when I was a kid. I'd long forgotten the name, but I couldn't forget the Alien Queen's green face and her thirst for blood. I was delighted to rediscover this cheese fest, and now that it's on Blu-ray, I can enjoy it over and over again. Like most Roger Corman productions, you have to have a love for the cheap and goofy if you're going to enjoy this. While I loved the alien queen as a kid, as an adult I got a kick out of watching John Saxon and Dennis Hopper trying to sell this movie. Their commitment to their parts is a hoot, especially when what you're seeing on screen is something that looks like it was reusing sets and costumes from 'Santa Clause Conquers the Martians!'

'Queen of Blood' may not be a tremendous work of art, but it is a movie that knows how to entertain an audience. Basil Rathbone may look like a guy aiming to cash a quick paycheck, but at least he's putting in the effort where other B-movies of the era wouldn't have been able to exploit the star power. Toss in the previously mentioned footage from other films and you have the makings for an evening of fun. This isn't quite a pizza and beer type movie, but it should absolutely be watched with as many friends as possible. You may laugh through it, but you're also going to have a great time and may even appreciate the movie by the time it's over.

'Queen of Blood' arrives on Blu-ray thanks to Kino Lorber and is pressed on a Region A locked BD25 disc. Housed in a standard case, the disc opens to the main menu.

Considering the last time that I saw this film it was on a worn out VHS tape, the 1.851 1080p transfer provided for 'Queen of Blood' is actually damn impressive. Now part of the fun of this film is the mashup of different films and the HD image makes it easy to spot the differences. Colors are bright and beautiful with primaries given plenty of pop - especially greens and reds. Film grain appears intact allowing for a fine about of clarity and detail that lets you appreciate the cheapness of the sets as well as the bright green makeup that Florence Marly has to suffer through. The print is in fine shape with only a little bit of speckling. For a low-budget Roger Corman flick - this is a pretty fantastic looking flick.

With an English DTS-HD 2.0 audio mix, 'Queen of Blood' suffers from some clarity issues. Dialogue is the principal issue here, almost like the actors' dialogue was recorded with a single microphone that wasn't always pointing at the actor speaking. It's not that you can't necessarily hear what is being said, you just have to strain to hear it in places. Sound effects and music come through fine, so that leads me to believe the dialogue issue stems from the original recordings. Imaging is a bit of a one-note approach as there really isn't much in the way of channel movement. Levels are pretty good, but again, due to the dialogue softness, you may need to monitor your volume.

Roger Corman Interview: (HD 6:27) I wish this feature was longer. Corman is such a wealth of knowledge that it's a shame he's only given less than seven minutes to talk about the film. Even in that short amount of time he offers up a lot of information.

Robert Skotak Interview: (HD 21:34) The film historian offers up a great amount of information about the production and how the film came together.

'Queen of Blood' may not be the greatest Roger Corman flick ever to make it to Blu-ray, but it's darn good entertainment. Kino Lorber has brought the film to Blu-ray in fine form, with a very good video presentation and a decent if slightly problematic audio presentation. Extras are a bit skimpy but informative. If you're a lover of B-Movies or the works of Roger Corman, give this one a look.

Sale Price 53
Buy Now
3rd Party 53
In Stock.
See what people are saying about this story or others
See Comments in Forum
Previous Next
Pre-Orders
Tomorrow's latest releases