It's the fourth and final season of the explosive action series Strike Back! Unlikely S20 partners Michael Stonebridge (Philip Winchester) and Damian Scott (Sullivan Stapleton) face their biggest assignment yet: a global threat involving a ruthless network of international terrorists. Throughout the final 10 episodes, Scott & Stonebridge and their S20 colleagues Philip Locke (Robson Green), Julia Richmond (Michelle Lukes) and Kim Martinez (Milauna Jackson) try to crack a missing-persons case in Bangkok. But what's on the surface is only the first step in a massive terrorist plot.

"Good guys? No one was shooting before you got here!"

"Yeah, that happens a lot."

When a show hits the home stretch and enters its final season, it can be a bit bittersweet for those who have stuck with it through thick and thin. On one hand you're sad to see it go, but on the other you're glad it's going out with some panache before things get too stale. Because it's the final season, there is a lot of pressure to wrap everything up and bring things to a fitting conclusion. 'Strike Back' is a show that has essentially allowed every red-blooded grown man to live out his childhood G.I. Joe fantasies with tough guys with big guns who overcome seemingly insurmountable odds. While this fourth and apparently final season of 'Strike Back' holds up to that mold, it also suffers from too much story, too many obstacles, and too many plot conveniences to maintain its already thin strand of believability.

Section 20 members Sgt. Michael Stonebridge (Philip Winchester) and Sgt. Damien Scott (Sullivan Stapleton) along with DES SA Kim Martin (Miluana Jackson) and Sgt. Julia Richmond (Michelle Lukes) under the leadership of Philip Locke (Robson Green) have had a quiet few days before being tossed back into the fray. During a peace conference summit between Britain and North Korea in Bangkok, Chloe Foster (Eliza Bennett) the daughter of diplomat Robert Foster has been kidnapped and held for ransom. Since Foster and Locke are old pals, Section 20 is brought in to save the day. But what they uncover is a plot that reaches far beyond a simple kidnapping for ransom.

As Robert and his wife Mei (Michelle Yeoh) eagerly await news of their daughter's rescue, the members of Section 20 learn that there is a traitor working against them. Someone who has been there every moment of the case, someone they considered a friend. As they start to unravel the threads of this mystery, they uncover a plot involving the Japanese Yakuza, North Korea's state-sponsored terrorist organization Office 39, as well as a former IRA bomb-maker with ties to Locke's painful past. Friends will die, allies will turn into enemies, and Section 20 will be the only ones left capable of preventing a third world war. 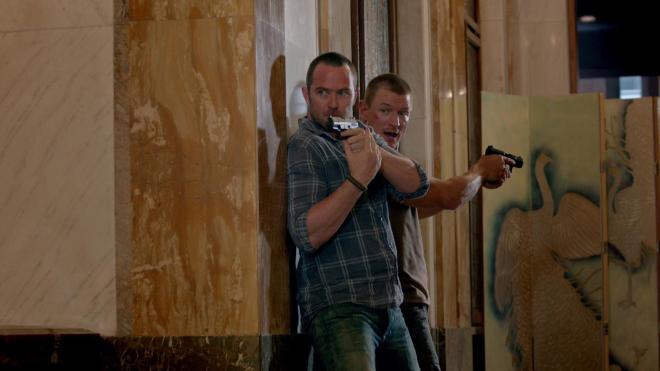 While 'Strike Back' still proves to be a lot of fun, this season suffers from what I've come to call "Rome Syndrome." There is so much plot and story and characters running throughout this season that it has the feel of two different seasons smashed together. As a result of this breakneck pace, we never really get to know the new characters who enter the scene, nor do we have time to mourn the several characters that get refrigerated throughout the run. I say refrigerated because like the previous seasons, the motivation to keep our two primary heroes of Scott and Stonebridge moving forward involves the death of a close friend, colleague, love interest - or in one particular case - a combination of all three.

Where this season started out very strong was by putting Robson Green's character Locke front and center through most of the action as well as the dramatics. It was refreshing to see his character hold as much weight as Stonebridge and Scott. It was also really cool to see Michelle Lukes and Miluana Jackson get plenty of action time in and in many ways out perform their male counterparts. It was also a nice twist to see Scott's son Finn (Christian Antidormi) enter the picture and give Stapleton's character something worth fighting for when the kid inevitably gets into trouble. That said, a lot of these character beats and development moments are undercut around the fourth episode when the show decides that the rest of the season is going to be a sprint from plot point to plot point rather than gradually moving along at a marathon pace.

Overall, 'Strike Back Season 4' is still a lot of fun. The action sequences come fast and furious and the show does a fantastic job of continuously raising the stakes and building suspense. My only wish is that the show had stretched things out a bit and had allowed some of the series more important plot points and character turns to resonate beyond "now we have a reason to pick up our guns and shoot someone again." When the characters Jetset from Bangkok to North Korea to Russia to Switzerland within just a couple of episodes, you get a bit of whiplash. As far as a grand finale, if this truly is the end of the road for our favorite Section 20 operatives, it's been a heck of a ride and Season 4 is certainly worth the time you give it.

'Strike Back Season 4' arrives on Blu-ray thanks to HBO Home Entertainment. Pressed on three Region A locked BD50 discs, all three discs are housed in a standard three-disc Blu-ray case with slip cover with each disc getting their own tray to occupy. Also included is a Digital HD voucher slip.

With a 1.78:1 1080p presentation, 'Strike Back Season Four' follows the form of the three previous seasons and offers a stunning, almost reference quality presentation. Shot digitally, there are vast amounts of detail to take in from character features to costuming and set design to the series' numerous locations - everything is on display and is gorgeous to look at. Colors tend to skew towards the golden tones keeping to the warmer climates most of the season occupies, some of the cast, as a result, can look a tad yellow at times but again that's more intent versus a transfer issue. Black levels are inky deep with strong shadow separations to give the series a fine three-dimensional vibe to it. Where the transfer falters a bit is when some of the smaller GoPro scale cameras are used for tight mobile action sequences where the characters are doing their own stunt driving. As the scenes cut from professional grade production cameras back to the smaller mobile units, there are some notable contrast blooms. it doesn't quite go full white supernova, but it's noticeable. Those few contrast issues are the only fault I can find in this otherwise near-perfect looking image transfer.

With a release like 'Strike Back Season Four,' it makes me wish television shows would be produced with full 7.1 mixes. While the DTS-HD MA 5.1 track for 'Strike Back Season Four' is a perfectly invigorating and immersive experience with powerful gunfights and loud explosions, I just wish it was more powerful than it already is. This is still a perfectly beautiful audio mix, I'm just being nit-picky after spending some time demoing new audio gear that I hope to invest in soon. Dialogue is front and center at all times ensuring that through the cacophony of gunfire, roaring car engines, screams, and explosions that you can always hear what is being said. While this is certainly a very loud show through most of each episode, the levels are perfectly registered so you don't have to adjust your volume to handle the spikes and lulls. All around this is a fantastic audio track that serves the nature of the show perfectly.

All extra features are spread out over each disc.

How to Strike Back: (HD 10:54) This is a collection of brief featurettes pertaining to various aspects of the show from riding vehicles to climbing a building to using a lamp cord to electrically shock a guy for information. Mostly they're just recaps of events you already saw in the episodes.

Season 3 Recap: (HD 1:01) This is basically a glorified preview for the previous season. Since this show isn't really linked from one season to the next, you don't need to view it to get caught up with the current season.

How to Strike Back: (HD 2:54) This feature pretty much nails home the idea that this really is the final season of the show.

Production Recon: (HD 5:22) This is very quick look at all of the different locations this season shot at. It's fun, but it's also really short.

As we come to the final stretch for 'Strike Back' it's nice to look back and say that it's been a fun ride. While the show was never truly great, nor did it rank as one of the best on television, it did however, manage to remain incredibly entertaining - especially if you were like me and spent many hours constructing intricate battles for your G.I. Joe figures to fight through. It's a child's action fantasy for grownups and on those grounds, it works amazingly well. HBO Home Entertainment has done a swell job bringing this fourth and apparently final season to Blu-ray in fantastic form with a stellar A/V presentation with some halfway decent - but brief - behind the scenes extra features. Fans of the show shouldn't hesitate a purchase. Recommended.