Splash into a Whole New Monster High World! Join your favorite ghoulfriends in an all-new aquatic adventure! When the ghouls get pulled into the school pool, they're transported to the gore-geous underwater world of the Great Scarrier Reef. Lagoona realizes she's come home and, in a fintastic mission of the heart, decides to come to terms with her own freaky flaws. Of course she'll need some help from the most creeperiffic friends ever as she confronts a frenemy from her past, competes in a scaretastic dance extravaganza, and fights a terrible beast from the deep!

The way I see it, what the 'Monster High' series of made-for-television movies has going for them is the imaginative ways the writers reframe and reassemble interchangeable stories from the same moral theme: take pride in your freakish uniqueness and never be ashamed of being a little weird. Collector's of the popular fashion doll franchise might have more to say in the matter, but as a parent — assuming those aforementioned collectors don't date much, let alone have children — the message expressed in each movie is appreciated. I can't imagine any parent feeling uncomfortable leaving their little monsters in front of the boob-tube when the point of each installment is to build self-confidence in their young fanbase. 'Great Scarrier Reef' is the latest entry in the adapted series that once again embodies the franchise's central theme while at the same time, expanding it to children feeling embarrassed for their parents' unique weirdness and conquering personal fears. The makers also put a great deal more effort in the elaborate visuals and glitzy style than in previous entries, nicely complementing this underwater tale.

Like in all their one-hour episodes, the tale turns the spotlight on one of the ghoulish teens and whatever qualm appears to be the cause of her uncertainty, a debilitating fear keeping her from being her true self. Making this installment a bit more unique than its predecessors is writers nicely drawing our attention to arguably one of the secondary characters, a voice not often heard for more than a few minutes in the background. Usually, the short movies generally focus on the four main friends — Frankie Stein, Clawdeen Wolf, Draculaura and Cleo de Nile, which makes sense since they are the children of the most famous and better remembered Universal Monsters. But this time around, Lagoona Blue is allowed to be the star of the show. (She's the daughter of the Gill-man from 1954's 'Creature from the Black Lagoon' but cutely named as Wade Blue for this franchise.) Given this episode's plot about understanding the source of her stage fright, it's rather fitting Lagoona should be our latest hero, providing the character with a larger backstory, introducing fans to her family and explaining her reasons for leaving her hometown. 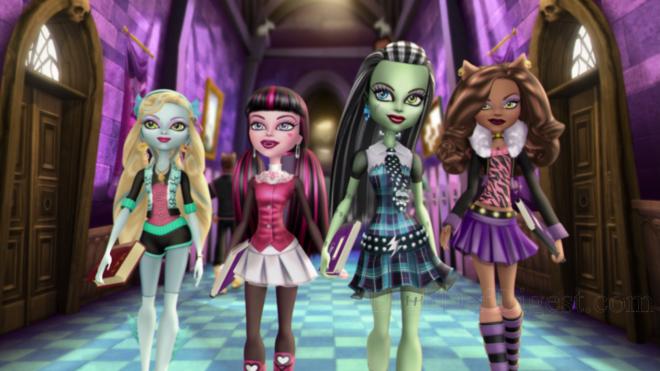 After being humiliated during a dance recital at the hands of Toralei — another common plot motif in the series — where everyone learns of her stage fright, Lagoona rebels by uninviting the feline bully from a school pool party. It's not the best tactic for handling public embarrassment, but the real story commences when the two enemies and the three aforementioned friends are sucked underwater by a new character, Posea Reef, the daughter of Poseidon. As far as I'm aware, this is the first time the animated franchise has taken monster inspiration from Greek mythology, and she's not the only one. The colorfully enthusiastic creature is assisted by three nymphs that look like seahorses and communicate via air speech bubbles. Later, when the friends are told their ticket back home is curing Lagoona's stage fright and travel to her hometown Scarrier Reef, the ghouls are told of the legendary sea monster Kraken roaming the lower depths of the ocean. The kids also meet the source of Lagoona's debilitating fear in a squid ghoul named Kala, who is really nothing more than a bully with a massive chip on her shoulders.

Part of what makes 'Great Scarrier Reef' a nice change of pace compared to its predecessors is this distinct aspect of the story. Whereas the makers only treated the subject of bullying in a lighthearted manner — usually where the bully eventually has their comeuppance — this tale tries to deal with it a bit more directly. Rather than simply having Lagoona confront Kala where she proves herself to be the better dancer and performer, and she actually does briefly but only ends up freezing in front of everyone, our gilled ghoul makes the effort to befriend and understand her nemesis. Although things don't go as planned, the undertaking creates a situation that ultimately exposes Kala's secret, a personal fear of her own that relates back to the franchise's central theme. Meanwhile — and I think what I like best about this episode — Toralei finally learns a lesson of her own, witnessing the hurt and damage caused by the cruelty and jealousy of others. I can't think of any other episode where the character shows a genuine change of heart, making this particular installment a noteworthy entry for kids to enjoy.

Universal Studios Home Entertainment brings 'Monster High: Great Scarrier Reef' to Blu-ray as a two-disc combo pack with a code for an UltraViolet Digital Copy. A Region Free, BD50 disc sits opposite a DVD-9 inside a regular blue keepcase with a glossy, embossed slipcover and a small catalog for collectors. After a couple skippable trailers, viewers are taken to a menu screen with full-motion clips, music and the usual options.

For anyone who's been following the 'Monster High' movies on Blu-ray, the latest installment to the series swims on home video with the same economical, Saturday-morning-cartoon style. But in spite of the inexpensive animation work, the excellent AVC-encoded transfer arrives with sharp, fine lines around various objects. The intricate, ornate design in the thin filmy skin of fins and the fairy wings are sharply detailed and very well-defined. The hair and clothing of characters are the most elaborate, exposing the distinct meticulous work that went into the ghouls' fashionable clothes and hair. During close-ups, viewers can make out individual fish scales in either the skin or outfits of the characters. Still, the video is a bit on the soft side, a deliberate dreamy quality that complements the movie's horror fantasy atmosphere.

The 1.78:1 image displays inky rich, full-bodied blacks with dark, swarthy shadows that penetrate deep into the screen while well-balanced contrast levels keep things bright and dynamic with crisp, brilliant highlights throughout. The most impressive aspect of the presentation is the sumptuous, richly-saturated array of colors. When the characters are sucked underwater and swim around the Scarrier Reef, the picture glows with a glitzy and dazzling palette. The CG video utilizes a vibrant and buoyant gamut of softer pastel hues, but primaries are cleanly-rendered and glisten with vivid luminosity. The scenes when the ghoulish friends first meet Posea and stumble upon Kala's electrifying performance could easily serve as demo-worthy moments that will wow viewers.

As with previous ghoulish adventures, the DTS-HD MA soundtrack sounds great and gets the job done, but it feels every bit like a made-for-television program with much of the action taking place in the fronts.

Nevertheless, imaging is broad and expansive with convincing off-screen effects that move smoothly between all three channels, exhibiting an extensively detailed mid-range and excellent separation. Low bass isn't particularly noteworthy, but it provides accurate response and a nice, weighty punch to the music and few bits of action. Although this is mostly a front-heavy presentation, the design occasionally employs the rears with a few discrete effects, but overall, the lossless mix feels dry and uninvolving for a majority of the time. Still, with distinct, well-prioritized vocals, the lossless mix is a good deal of fun for the little monsters in the family.

'Great Scarrier Reef' is the latest instalment in the 'Monster High' series and features a story that stands somewhat unique to its predecessors without straying too far from the franchise's central theme. As in previous episodes, the movie introduces new characters while focusing on one monster's particular dilemma about conquering one's fears and being more understanding of other's ghoulish differences. The Blu-ray arrives with the same Saturday morning cartoon style, but the video shows a great deal color variety and definition, making it the best looking release of the series thus far, while the audio presentation is essentially the same as others. With the usual set of supplements, the overall package will likely only attract fans, parents and collectors of the fashion doll franchise.

Sale Price 10.45
Buy Now
3rd Party 8.58
In Stock.
See what people are saying about this story or others
See Comments in Forum
Previous Next
Pre-Orders
Tomorrow's latest releases