Yongary, Monster From the Deep

A monstrous creature creates destruction throughout Korea... as scientists running against time create a refrigerant that maybe the only weapon to stop the monster before it destroys the whole country. This cult-classics was Korea's first entry into the kaiju movie genre, made famous by the Japanese with classics Godzilla and Gamera. After a nuclear test causes a massive earthquake, scientists realize that the quake is the least of their problems… the intense radiation has awoke the legendary reptilian monster, Yongary. Martial law is declared and cities are evacuated as the armed forces battle the fearsome creature with all the arsenal firearms available to them. Special Features: Audio Commentary by Film Historian Steve Ryfle and Genre Journalist Kim Song-ho | Phantom From 10,000 Leagues "Trailers From Hell" with Joe Dante | Trailers

When one country has a signature monster - or a few if you're Japan - it's understandable when a neighbor wants a little taste of the good stuff. Not long after the classic 1954 film 'Godzilla' and its numerous sequels and off shoots took off, South Korea decided it was their turn to get into the giant rubber suit monster genre with 1967's 'Yongary, Monster From the Deep.' While the film tries to be like Godzilla, it winds up being more of a fun and funky Gamera movie complete with a cute kid and a dance number!

Because of man's drive to explore the depths of the planet and mine resources for energy and profit, they managed to awaken a monster from the depths. When a nuclear blast shifts the tectonic plates and uncovers a beast, the gigantic monster Yongary awakens! It's only weakness seems to be the cold, and wouldn't you know it, the scientists and the military have run out of refrigerant! As the people of Korea flee their cities as the gigantic monster goes for a stroll, the only option is to lure the creature away from populated areas with burning oil until they can find a way to kill the monster. But as one little boy soon learns, the terrifying creature from the depths of the earth may just want to dance - even if it's on a quest to drink all of the fire that it can.

'Yongary, Monster From the Deep' is a bit of an odd duck entry into the now infamous kaiju genre. As I mentioned at the outset, this film plays as a bit of a smash-up of the original 'Godzilla' as the monster is initially intended to be something for the population of Korea to fear, but once a little kid comes in the picture and the pair gets down and get funky busting a few groovy moves, the film ends up trying to also be a 'Gamera' flick. With the monster causing untold billions of dollars of destruction, it also seems to have no trouble taking a little time out to do a two-step with a cute little kid. It's because of this that the film is a tough nut to crack. On one hand we're supposed to fear the goofy-looking monster but then on the other the film tries to make Yongary a charming misunderstood lizard creature. 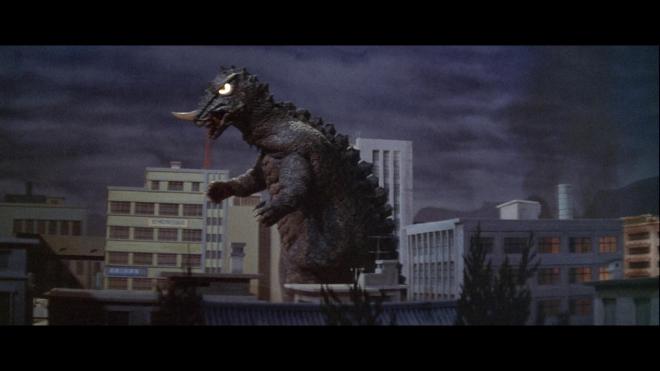 Due to damaged negatives and incomplete prints in the film's native Korean language, the U.S. dubbed TV release prints are believed to be the only ones available for the film in its entirety. It's unknown to me if the tone of the film is the same for the original Korean release or not, but I will say that this U.S. release is a pretty great time, especially if you've grown up watching the older 'Godzilla' adventures. I was honestly waiting for Jet Jaguar to come flying in towards the last act because the tone of this one falls right in line with that sort of adventure.

As a kaiju movie, 'Yongary, Monster From the Deep' is a bit of a mixed salad of ingredients. On one side of things, it's trying to be terrifying and be a true blue monster film. On the other hand, it has a strong sense of humor and tries to be fun at all times. It's a bit tough to handle the tone swings but if you just go with it, you should have a lot to enjoy from 'Yongary, Monster From the Deep.' I could see little kids enjoying it quite a bit. It's not a perfect entry, as I mentioned it doesn't know when to be scary serious or funny, but it does follow the traditional gigantic monster playbook well enough to stand on its own two feet supported by a really big tail buttressed with some fire breath. If you've never taken a look at this one, it's a wild and fun little flick and worth the time you put into it.

'Yongary, Monster From the Deep' arrives on Blu-ray thanks to Kino Lorber and their Studio Classics line. Pressed onto a Region A locked BD25 disc and housed in a standard Blu-ray case, the disc opens directly to a static image main menu with traditional navigation options.

'Yongary, Monster From the Deep' arrives with a bright and colorful 2.35:1 1080p presentation. Fine film grain is retained throughout offering up some splendid detail levels throughout much of the film. It doesn't take much to appreciate facial features, costumes, the production design and yes, even the titular rubber monster suit and the intricately crafted model cities that it destroys! Colors are bright and beautiful featuring strong primaries that have plenty of pop. Where the transfer has a bit of trouble is during optical effects or matte shots as the image becomes noticeably softer and loses a lot of the finer details that it featured in adjoining shots. The print is unfortunately in a bit of rough shape with quite a bit of speckling and some visible burn marks and scratches. It's not a terrible looking transfer but without a full grand restoration effort, this is probably the best it's going to look.

'Yongary, Monster From the Deep' comes with a halfway decent English DTS-HD MA 2.0 audio track. For those expecting some big explosions and loud monster roars out of this mix, you may be a bit disappointed. The audio track is all right and it gets the job done, there just isn't a lot of oomph and power behind the bigger moments. The film's dubbed dialogue comes through crystal clear and is never an issue to hear. The sound effects and music can sound a bit canned but they don't altogether sound hollow or out of place, more like they could have been turned up a notch or two during the mixing phase. Levels are just fine and there isn't any need to alter your volume. It's a good audio mix, just not as impressive as one might hope.

'The Monster that Challenged the World' Trailer: (HD 1:35)

'Yongary, Monster From the Deep' may not be everyone's type of Kaiju film, but it proves to be pretty darn entertaining if you're in the right mood for it. Kino Lorber has done a fine job bringing the disc to Blu-ray with a serviceable A/V presentation and a solid audio commentary track. If you're up for a giant rubber suit lizard attacking people movie, 'Yongary, Monster From the Deep' should fit the bill nicely and is at the very least worth a look.