Biopics are an abundant and yet difficult dramatic sub-genre to nail down. These are stories that come with a baked-in audience because these films tend to shine a spotlight onto a relatively well-known individual. People want to see a story about the life of an interesting person because to some degree they already know the story - they just want to witness a great actor take on that particular historical figure. Most of the time biopics are perfectly fine endeavors and prove to be entertaining, but when one fails to deliver, it falls hard and flat. Unfortunately, Ken Russell's 1977 film 'Valentino' starring world-famous dancer Rudolf Nureyev as Rudolph Valentino is a film that fails to do cinematic justice to the enigmatic silent era silver screen legend.

Like most immigrants, Rudolph Valentino (Rudolf Nureyev) arrived in America with big dreams, although his weren't about opening up his own shop or starting a family. Valentino wanted to be on the world's stage, to see himself and his name shining brightly amongst the stars as a world-class entertainer. Already a skilled dancer, he becomes an upscale gigolo until he falls into the waiting arms of screenwriter June Mathis (Felicity Kendal) who helps make him a star of the silver screen. As he becomes the first male sex symbol of film, scandal quickly follows as he is linked with numerous up and coming starlets and industry players. While this kind of public scandal should have derailed his career, instead it propels him to new heights as everyone wants a piece of Valentino - even when he suddenly dies of a gastric ulcer - his funeral is mobbed by fans and is besieged with reporters all looking to learn more about the one true Rudolph Valentino.

Part of me routinely dislikes biopics - especially if they're about more of a recent cultural figure where film and audio clips exist - they just feel like a cheat for the actor taking on the part. While this isn't always the case, it feels like 'Valentino' and its lead actor Rudolf Nureyev's performance was based entirely on scenes and clips from Valentino's films. There is a strange hammy, over the top quality to the acting from every actor in the film that makes it feel like you're watching one of the first talking pictures where the actors still are filling their performances with flamboyant gestures and exaggerated movements. While the film is no doubt playing up some of the more comedic and boisterous highlights of the late actor's life, it's incredibly strange to see these people mugging for the camera or overplaying their emotional responses to the point that it becomes unintentionally comical. 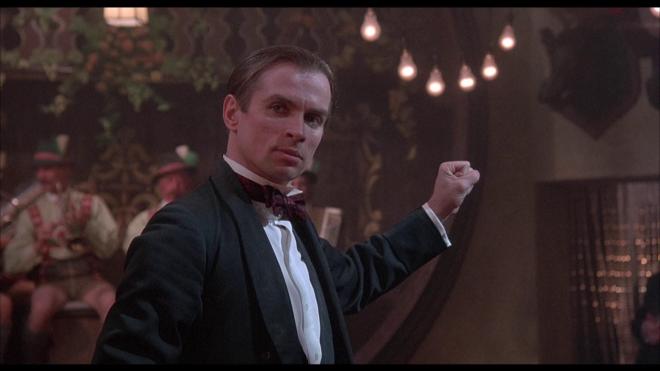 Taken as a whole, Ken Russell's biopic is a pretty standard affair. It tells the beginning, middle, and the untimely end of its subject through a series of flashbacks. The only really unique aspect of this approach is that each of these stories is told through the device of a reporter interviewing one of his many weeping lovers. While this could have been a great way to spice things up and create an understanding about Valentino and how he was a popular figure with the ladies who wasn't above selling himself to get ahead, the direction to take things to extremes undercuts any dramatic current the film tries to build. When an actress who should be simply tearful and somberly crying is instead wailing as though she had just been shot in the stomach on a beach in Normandy is just too much.

The shame of this film's failure to connect with its subject matter in an appropriate way is that it's quite clear everyone involved in this production is trying their best. While he wasn't an accomplished actor, Rudolf Nureyev tries to give his portrayal of Valentino some sense of dimension as do Leslie Caron as Ala Nazimova, Michelle Phillips as Natasha Rambova and Seymore Cassel as George Ullman. There is a wonderful scene between Nureyev and Carol Kane as a young starlet that is ultimately undercut because the film seems to always find a way to make the material hammy instead of enlightening. All of these oddly executed performances are against the backdrop of an incredibly produced movie that features sumptuous set design and is beautifully shot with a fantastic score by Stanley Black and Ferde Grofé. I wish I could say that I came away from viewing this film feeling like I had witnessed a great cinematic production, but instead, I feel like I just witnessed a glitzy dinner theater dramatization of an incredible performer's life story. It's still a decent movie overall and does manage to provide insight into the life of Rudolph Valentino, I just wish the film had shown some sense of restraint and allowed its cast to actually play real characters instead of the slightly cartoonish versions on display.

'Valentino' arrives on Blu-ray thanks to Kino Lorber and their Studio Classics line. Pressed onto a Region A Locked BD25 disc and housed in a standard Blu-ray case, the disc opens directly to a static image main menu.

'Valentino' sports a very strong 1.85:10 1080p transfer that is sadly undercut by several moments of print damage. Really this transfer is absolutely exquisite filled with bright and bold colors, notably strong detail levels, and strong black levels, but there are a couple of pockets of scratches and debris that keep this from being a near perfect transfer. Fine film grain is retained throughout so you'll be able to appreciate the impressive facial features and makeup work while soaking in all of the production design details like set work and period costuming. As I mentioned Black levels are very strong with minimal crush moments helping the image to maintain a sense of depth and dimension. Colors are bright with plenty of pop but also represent the period color scheme well - although flesh tones can skew slightly pink at times. Overall this is a pretty wonderful looking transfer and fans should be pleased by its appearance.

'Valentino' comes packed with a robust DTS-HD MA 2.0 track that really plays to this film's strengths. Dialogue is clearly heard throughout without any overlap or conflict between the score or sound effects. There is an appreciable sense of atmosphere to this track that allows most scenes to have plenty of space and dimensionality. Where there is a slight issue with the mix is that it's actually a bit on the quiet side of things. The mix is stable and consistent throughout so you shouldn't need to adjust your volume once you have it at a comfortable volume, it's just that you're likely going to need to have it louder than you normally would for any other film.

Audio Commentary: Film Historian Tim Lucas provides an informative audio commentary for this release. It's mostly comprised of anecdotal stories, but they do manage to shed some interesting light on the production of this film as well as the real life Rudolph Valentino.

Silent Years: Films from the Collection of Paul Killiam: (SD 17:08) This is a TV program hosted by Orson Welles as he introduces scenes and clips from silent era films, several featuring Rudolph Valentino.

Valentino's Funeral Procession: (SD 3:03) It's incredible to think that over 100,000 people came to pay their respects when Valentino died! The footage is impressive to say the least!

Animated Montage: (HD 1:08) This is a collection of behind the scenes photos prominently featuring director Ken Russell.

'Valentino' is absolutely an ambitious production, to say the least. It features a talented cast who are working very hard and an impressive production design, but the film never quite comes together in a way that is satisfying or helps you feel like you got to know the true Rudolph Valentino. Kino Lorber has brought the film to Blu-ray with a strong A/V presentation and a host of fascinating extras features. The film itself is a tough recommend but the Blu-ray is still worth a look.