Two For the Seesaw

Shirley MacLaine (The Children s Hour) is Gittel, an eccentric dancer from the Bronx, and Robert Mitchum (Man with the Gun) is Jerry, a mid-western lawyer whose marriage is on the rocks, in Two For the Seesaw. Gittel and Jerry meet in Manhattan, where Jerry has headed for a new life when his old one falls apart. There he meets an old friend, Oscar (Eddie Firestone, Duel), who invites him to a swinging Greenwich Village party where he meets the charming bohemian Gittel. The two hit it off, if only physically at first, and begin an affair, but there are several factors conspiring against their relationship besides their differences in backgrounds. This intimate film, bolstered by fine direction from legendary filmmaker Robert Wise (Run Silent, Run Deep), is a compelling drama that also features the stirring onscreen chemistry of Mitchum and MacLaine and the intelligent handling of the original material, the play by William Gibson (The Miracle Worker).

Relationships can be tricky business. Somewhere, somehow, when two people meet, something clicks and a little spark of passion ignites. Sometimes it burns hot and fizzles out, sometimes it smolders and becomes something great, other times it fizzles out completely. While there are moments in which a budding relationship feels like it should work, the reality that two people could be a bad fit isn't always easy to see. In 1962, 'The Sound of Music,' 'West Side Story,' and 'Star Trek: The Motion Picture' director Robert Wise paired up venerable tough guy Robert Mitchum with the spritely Shirley MacLaine in an adaptation of William Gibson's stage play 'Two for the Seesaw' to explore these very themes.

It isn't easy being a divorcé in a new city, especially one like New York City. Nobody knows this alienation and persistent loneliness like Jerry (Robert Mitchum). As an out of work lawyer trying to find himself, he spends his days wandering around the city aimlessly, from Broadway to the Brooklyn Bridge to Greenwich Village. He doesn't talk to many people and many people don't talk to him. Invited to a party thrown by a bunch of beatniks, Jerry meets the fast talking dancer Gittel (Shirley MacLaine). The pair don't say anything to each other, but her youth and liveliness brings something out in Jerry, something that he hasn't felt for quite a long time.

After shyly asking her out on a date, Jerry and Gittel begin an unlikely relationship. Jerry is what would easily be called a "square" by most accounts and one would think that his pairing to a free-spirited dancer like Gittel who lives one day at a time wouldn't really be a match, but the pair actually works. For awhile at least. As Jerry and Gittel figure each other out, they begin an even more important process of self-examination. Jerry is inspired to get back to work as a lawyer and Gittel is inspired to open her own dance studio. Because their relationship with each other has brought this about, they begin to feel an unspoken obligation towards each other. But is this sense of obligation actually real, true, and honest love? Or is it a process of self-delusion that they're really not a good fit and make better friends than they do lovers? 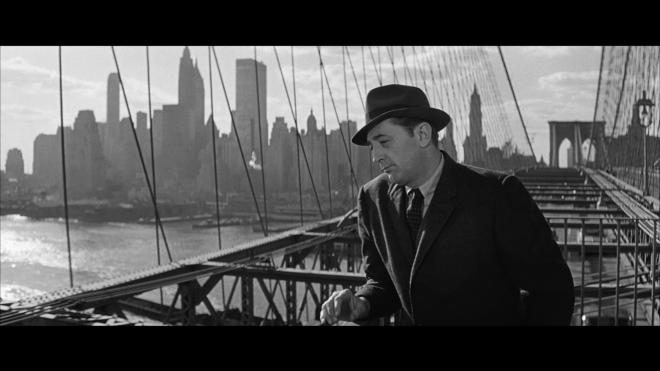 'Two for the Seesaw' is a very stage-like film. Locations are close and intimate with few background players or wide expansive location scenes making the film feel like you are watching a two-person performance in a small off-Broadway theater someplace. It's because of Robert Wise's choice to center the film this way that the story manages to sidestep a number of cheesy melodramatic pitfalls and maintains a sense of close intimacy. As we watch Robert Mitchum's Jerry meet and begin to court Shirley MacLaine's Gittel, it's hard not to feel like you're watching a pair of your own personal friends meet for the first time and strike up an unlikely romance. On one hand you think it's the strangest of pairings and it shouldn't work, but then, on the other hand, part of you wants to believe that it could work.

While it may not seem like the best of pairings, the onscreen chemistry between Robert Mitchum and Shirley MacLaine is exactly why 'Two for the Seesaw' works. Both actors play to their strengths, Robert Mitchum as a semi-stoic tough man with a sensitive side, MacLaine as a free-spirited smart talker, and the results are a display of two classic performers sharing screen time together. The dialogue crackles with each exchange and both Mitchum and MacLaine are in peak condition with this film. They make their respective characters relatable with ease. You want to see them work out their differences, you want to see them strike out together, even though there is this part of you that recognizes that it probably isn't a great match.

'Two for the Seesaw' is a nice, small little film that showcases two performers reveling in their craft to bring a story about two people on opposite sides of the cultural coin coming together. The dialogue moves fast and keeps the pace going at a nice clip allowing you to keep up with what is happening without letting you get too far ahead of the plot. I found this to be an endearing look at relationships and their inherent complexities. If you're after a quiet movie for a date night in, I would strongly consider 'Two for the Seesaw.'

'Two for the Seesaw' arrives on Blu-ray thanks to Kino Lorber as part of their Studio Classics line. Pressed on a Region A locked BD25 disc, the disc is housed in a standard Blu-ray case and opens directly to a static image main menu featuring music from the film playing in the background.

'Two for the Seesaw' arrives with a decent black and white 2.35:1 1080p transfer. It's decent, but it won't be winning any awards for catalogue transfers. While fine film grain is retained, there is a prevailing softness to the image that keeps details from truly shining. Close-ups look the best, mid shots are okay, but anything in the distance loses a lot of clarity. Black levels are generally okay, but contrast seems to have been boosted in a few places and never quite approaches the necessary inkiness they should. Some of the quieter, close quarters sequences like those that take place in Gittel's apartment have a nice film-like appearance with solid black levels and wonderful shadow separation allowing for a nice sense of depth. All around for a deep catalogue release that hasn't undergone any kind of restoration effort, this isn't half bad, but at the same time if feels like it could look a bit better.

'Two for the Seesaw' comes with a DTS-HD MA 2.0 audio track that works for the movie, but is far from sparkling clean or crystal clear. With slight his almost constantly dominating the background, at times it can be a bit difficult to hear what is going on. Dialogue isn't interrupted too badly because of this, but at the same time the actor's words have a little extra competition to be heard making the track sound a little soupy at times. Background sounds aren't really an issue because this is such a close intimately-filmed film that there are very few busy background scenes so there isn't ever any call for an immersive audio experience. It's not a terrible audio track by any stretch, it's serviceable.

While 'Two for the Seesaw' may not be everyone's contemplative flavor of a movie, it does provide an interesting look at the complexities of relationships, how they start, how they progress, and how they can end or continue. Featuring fantastic performances from its two lead actors, the film itself is absolutely worth a watch, if for no other reason than to appreciate the talent onscreen and behind the camera. Kino Lorber has done a decent job bringing this film to Blu-ray with a serviceable A/V presentation. Extras are only a set of trailers. 'Two for the Seesaw' is worth a look.

Sale Price 15.03
List Price 29.95
Buy Now
3rd Party 16.99
In Stock.
See what people are saying about this story or others
See Comments in Forum
Previous Next
Pre-Orders
Tomorrow's latest releases