One of several early-1950s films to capitalize on the Kefauver Committee's investigation of organized crime, The Captive City stars John Forsythe (The Trouble with Harry, Topaz) as crusading editor Jim Austin. While Austin prepares his testimony before the Committee, the film flashes back to the events that led to this courageous act. Victor Sutherland (Donovan s Brain) plays mob boss Murray Sirak, who has the entire police force of Austin's hometown under his thumb. Sirak in turns takes his orders from an unseen Mister Big, who seems to be "above the law". Based on the experiences of Time Magazine reporter Alvin M. Josephy who wrote the story and co-wrote the screenplay with Karl Kamb (Pitfall). Legendary filmmaker Robert Wise (Two For the Seesaw) directed this classic film noir that features striking black-and-white cinematography by the great Lee Garmes (Man with the Gun). Senator Estes Kefauver appears as himself.

Every few years or so, Hollywood decides to take on an "issue." Sometimes it's drugs, sometimes it's race relations, gender equality, the list goes on. As one issue is tackled by about a dozen films or so, it falls in popularity and the next issue becomes the en vogue topic to tackle that hits at the core of American life in the moment. It's easy to see how creating entertainment surrounding real-life events or topical issues could be exploitive, but on the other hand, some of those movies end up being pretty darn good. Not all of those movies end up that way. In the 1950's Communists and Organized Crime seemed to be the menaces of the day and boy were there a slew of movies made about both topics. Some were good, some were bad. Robert Wise's 'The Captive City' starring John Forsythe, unfortunately, falls in the latter category as it struggles to create genuine tension under the weight of a heavy-handed message.

Abuse of power, corruption, scandal, truth, and justice - that's what a reporter is supposed to write about in a newspaper; the issues that matter. For newspaperman Jim Austin (John Forsythe in his film debut), it's getting harder and harder for him to write about the truth of what's happening in his small, middle of America city. Every day he comes home to his wife Marge (Joan Camden) and tells her of the troubles he's having getting the real news printed. As it would happen, his small little city is being overrun by the scourge of organized crime.

While mafia dons aren't taking over the town personally, they have guys like Murray Sirak (Victor Sutherland) doing their dirty work of setting up illegal vice like off-the-books gambling. As Jim tries to expose these local atrocities of bookmaking, he finds out that his local City Hall representatives are in the pocket of Sirak and the crime bosses who employ him. Even when veiled threats don't stop Jim's bull-headed nature, more serious crimes start happening all around him. With the local police unable to do anything, Jim must make a daring dash to the state capital to expose the truth. 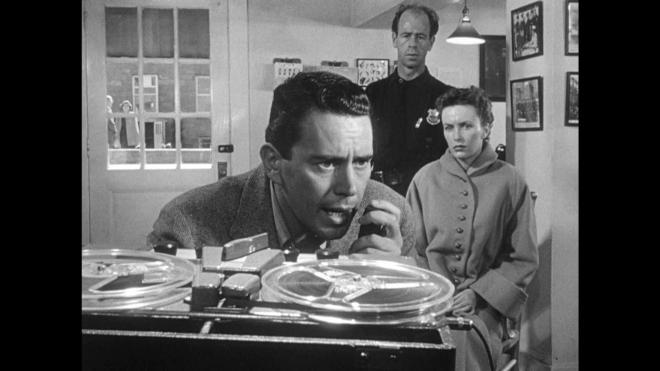 While I do appreciate what 'The Captive City' is trying to do, I just didn't gel with this movie at all. I can imagine it was quite the thing during its original run, but over sixty years removed it's actually kind of silly. To put it plainly, this film is a well-acted, shot, directed and better budgeted 'Reefer Madness.' Real-life senator and anti-crime crusader Estes Kefauver even comes in to do some final sermonizing to hit home the point that small-time crime is something important… for some reason. This is a movie that is so entirely preoccupied with making hysterical statements about the supposed impact of organized crime and how it can suck the lifeblood out of the American heartland that it forgets that the impact of the message would have been better received if they had just made a solid, straightforward thriller.

While I dig John Forsythe, he was a hell of a lot of fun on 'Dynasty,' he's incredibly difficult to relate to here. Part of that has to do with the character he plays. Jim Austin is just so one note that he's not really a person. He may as well have been an animated cricket as he serves to stand as the embodiment of the American conscience. He's not a flawed man, he doesn't have his own relatable vices to make him feel like a real human being. He's just a stubborn guy with a bee in his britches and by golly, he's gonna make an issue out of it even if no one else cares. Added with his character woes, the character Murray Sirak who is supposed to be the most corrupted scourge to hit the town is a weak villain. Essentially he's supposed to be the local enforcer and yet he doesn't really do anything to make him a fear-inducing character. In fact, he's so non-threatening that a car with a Florida license place - presumably where the mob lives - is more of a threat.

It's nice knowing that 'The Captive City' isn't a film that defines director Robert Wise, he thankfully went on to do a few better movies like 'The Sound of Music' for example. I guess what it comes down to is that I have little patience for movies that wear their message on their sleeves and then force the issue in front of your face. I can stand to be talked down to only so much before I get irritated. As a bit of film noir, 'The Captive City' certainly isn't a terrible movie, it is beautifully shot by the late great Lee Garmes who won an Oscar for 'Shanghai Express,' but it's hardly a shining example of crime fiction.

'The Captive City' arrives on Blu-ray thanks to Kino Lorber and their Studio Classics line pressed onto a Region A locked BD25 disc. Housed in a standard case, the disc opens directly to the main menu.

For a film that is now over 60 years old, 'The Captive City' is given a pretty solid 1.33:1 1080p Black and White transfer. With fine film grain retained, the image offers up a lot of detail still and features some strong-looking textures. Most of the time black levels and shadows are spot on creating a deep and inky-looking image with an abundance of depth. There are a few daylight scenes that oddly look as though contrast levels were boosted so the greyscale looks too pale and the image becomes flatter and loses those strong black levels. Part of me wonders if this print, which is in pretty decent shape with only mild speckling, was assembled from multiple sources? That's the only way I can figure why some scenes feature the unnecessarily boosted contrast levels. All around this is a good looking image and fans should be pleased.

With a tinny quality and a near-constant hiss sound, 'The Captive City' arrives with a rather flat English DTS-HD MA 2.0 audio track. To put it plainly, there just isn't much life in this track. Dialogue is clean and easy to hear, but at times sounds like the cast had looped their lines in post by talking into a tin can. Sound effect elements and the film's score by Jerome Moross are there, but they don't exactly ring true. While the track is free of any pops or breaks or drop-offs, the hiss sound is constant and present throughout. For a film that hasn't seen much remastering or restoration love, it's hard to complain, but at the same time, it's easy to notice that with a little effort a lot of the trouble spots could probably be fixed.

'The Captive City' is one of those movies that is just entirely too preoccupied with the quest to say something profound and important about the state of America during the 1950s that it forgets to make a movie that is thrilling or entertaining for the audience. The late great John Forsythe is a lot of fun in his first film role but even the talented actor can't quite raise the film above mediocre levels. Kino Lorber has brought this film to Blu-ray with a very good image transfer but the audio track could use a little TLC. The only extra features are a collection of trailers. If you're a fan of the flick you should be pretty happy with this release, if you're new to the show, give it a rent.