Wrong Side of Town

Overview - Bobby (Rob Van Dam), a former Navy Seal, seeks revenge by killing a crooked nightclub owner who attacked his wife. The owner's brother comes after Bobby by placing a massive bounty on his head. Bobby's only hope will be to enlist his old friend Ronnie (David Bautista) in retaliation efforts. But first he'll have to repair the falling-out they had years ago. With Ronnie's help he'll stand a chance, but ultimately it will be up to him to save his family and escape his death sentence.
OVERALL
One to Avoid

I guess that might be the reason why I don't have studios beating down my door to write movie taglines, but honestly there's no other way to sum up David DeFalco's latest direct-to-video stinker 'Wrong Side of Town.' The acting is awful, the stunts are uninspiring, the story has more plot holes than a brand spanking new cemetery -- and you know you're really in trouble when Lionsgate deceptively misleads buyers with the ol' wrestler switcheroo trick on the Blu-ray packaging. Yep, even though Batista is one of the only glimmers of light in this bleak mess, he's not the central focus in the film. In fact, each of his appearances are brief at best. Talk about a studio stooping to a new low.

Ex-Navy Seal Bobby Kalinowsky (Rob Van Dam, the real protagonist in this film) is a family man living with his wife Dawn (Lara Grice) and bratty teenage daughter Brianna (Brooke Frost) in the quaint and peaceful side of town. Recently moved in next door to the Kalinowskys are new neighbors Clay and Elise Freeman (Edrick Browne and Ava Santana) who break the ice by inviting Bobby and his wife to a hip club on the other side of the tracks. This is where the friendly evening to get to know each other a little better goes terribly, terribly wrong.

On her way back from the ladies' room, Dawn is approached by a lowlife named Ethan (Ross Britz) who tries to feel her up and is met with a sharp slap to the face. Furious, the man forces her into a back room with only one thing on his mind. Bobby comes to her rescue just in the nick of time -- but accidentally kills her attacker in the process. Big mistake, for Ethan was the brother of the notorious owner of the club, Seth Bordas (Jerry Katz). Seth finds out what has happened and redlines -- putting the word out on the streets offering a $100,000 bounty to anyone who takes Bobby down. Now with every rat in the city crawling out of the woodwork to claim their piece of cheese (that's money in street lingo), Bobby will have to rely on his military training and call in old debts in order to survive the night.

For those of you who aren't followers of the WWE (World Wrestling Entertainment), Rob Van Dam is best described as a younger, 'roid-ier Jean-Claude Van Damme (I'm guessing that's how the ring name stuck), only with about one-tenth of the Muscles from Brussels' acting chops. Every time he speaks in 'Wrong Side of Town' there's a slight delay as if his computers are struggling to process what he's supposed to say next. Fortunately for RVD there are two forces at work to distract viewers from this shortcoming. First, there's his god-awful haircut that would fit right in with Dog the Bounty Hunter's Clan. I don't think the style of a ponytail with shaved sides even has a name to be honest, so let's call it a Mullet-ov Cocktail. Secondly, he's surrounded by recent graduates from the Thespian School of Robert Coleby. Brooke Frost, Edrick Browne, recording artists Ja Rule and Omarion, and most of Seth's goons might as well disconnect their phone lines since they just kissed away any future callbacks. If it weren't for porn queen Stormy Daniels, the star of over a hundred films including 'The Witches of Breastwick,' 'Super Size Meat,' 'Thumpin Melons,' and 'Hot 4 Twat' (just mentioning these specifically because the titles made me giggle), along with WWE superstar wingmen Nelson Frazier Jr. and Batista to pick up the slack, 'Wrong Side of Town' would clinch a Razzie Award for the worst ensemble cast of 2010.

If there's anything worse than the acting, though, it's the complete ineptitude of writer/director David DeFalco. This guy's only real claim to fame is pissing off reviewers everywhere with his blatant rip-off of Wes Craven's 'The Last House on the Left' (which I won't give any more needless publicity by naming it here). 'Wrong Side of Town' won't have anywhere near the same level of controversy, yet still does absolutely nothing to cast DeFalco in a new light. The biggest stunt in the entire movie involves Rob Van Dam climbing up a fire escape a few feet and then falling onto a dumpster. The fights aren't quite 'Death Warrior'-bad, but they're definitely in the same venue (dull fight moves, sloppy editing, knives never having a drop of blood on them, the list goes on and on). And the story? I'd wager more intelligent thoughtwaves emit from the cheap plastic guns in this movie's prop department.

Oh, how I wished I were finished right here and now, but sadly this is the "but wait… there's more!" paragraph. I always knew Navy Seals were badass, I just didn't realize they were Skynet-badass. In crowded nightclubs with blaring music, it seems Navy Seals have internal sonar that can pick up cries for help coming from a secluded office that has the door shut. When a Navy Seal needs to find an old war buddy, all they need is a GPS and it will practically lead them to the booth they're sitting in at a strip club. Finally, Navy Seals never have to worry about bleeding to death once shot, since the "seal" in their name apparently refers to the ability of their self-sealing wounds. Maybe the Navy should consider showing these clips the next time they want you… they want you… they want you as a new recruit.

Lionsgate presents 'Wrong Side of Town' on a single-layered BD-25 Blu-ray Disc inside a standard blue keepcase. Before getting to the menu, we once again have the extremely tacky 'Lionsgate Blu-ray' promo, along with trailers for 'Crank 2: High Voltage' and 'Saw VI.' The U.S. version of this Blu-ray is reported to be region locked and therefore will only function properly in Region A compatible PlayStation 3s and standalone machines. 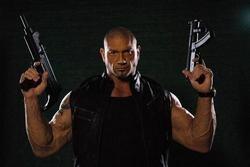 Lionsgate paints the 'Wrong Side of Town' with a 1080p/AVC MPEG-4 (1.85:1) encode and while it's certainly watchable for a direct-to-video release, it still never really bothers climbing out of the mediocre gutter.

Obviously the movie didn't cost a whole lot to make, and the transfer does nothing to hide this fact. The image frequently becomes blurry, whether it's the amateur camerawork or a faulty video presentation. The picture is also shrouded in bouts of softness, with close-ups of faces looking the sharpest and distance shots losing a fair bit of detail. Aside from a handful of daylight scenes that offer some depth and vibrant coloring, the rest of the film takes place at night where dimensionality is lacking and the color palette is more cold and subdued. Black levels are inconsistent, sometimes appearing nice and dark and other times they're a glowing shade of bright blue. Shadow detailing is generally weak throughout as well. The transfer is plagued with frequent artifacts and plenty of color banding, but on the bright side digital noise is kept to a minimum and I didn't feel it was a distraction.

To be honest, though, even if the transfer for 'Wrong Side of Town' had turned out to be above average, this is one case where it really wouldn't have mattered. The viewing experience would be just as unpleasant no matter how pretty it looked. 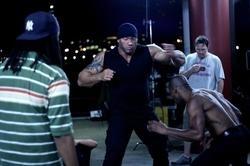 The DTS-HD Master Audio 5.1 soundtrack on this Blu-ray isn't very impressive either, but again, it could be worse.

The corny dialogue is mostly clean and intelligible, except in the opening scene when an audiotape is played that supposedly reveals some sort of betrayal evidence, but after playing it back twice I still have no idea what the garbled recording says. Surrounds have very little activity, lazily perking up for occasional discrete ambience and when Ethan gets totally wasted on cocaine at the nightclub, though that's about it for rear participation. Atmospherics and dynamic range is pretty sickly overall, and there isn't much in terms of feeling a sense of directional movement. The seemingly endless supply of heavy metal and hip hop music (which never suits what's going on in the scene by the way) doesn't stray from the front channels and is the main source of bass thumping. Overall, the track is reliable, nothing more.

The Blu-ray includes all of the same content found on the standard-definition DVD release. What looks like a fair bit of content upon first glance is actually pretty deceiving since there isn't even twelve minutes total of feature-related material on the disc. It's also worth noting most of the content is presented in 720p. 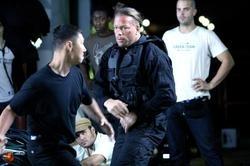 You know a movie has to be bad if a) David DeFalco had anything to do with it, b) It stars multiple WWE personalities, or c) The studio themselves resort to false advertising to try and cut their losses. 'Wrong Side of Town' nails all three to become the rare ultimate triple threat of terrible. Toss in mediocre video/audio on top of worthless supplements, and this Blu-ray is easily one to avoid at all costs.

Sale Price 8.69
List Price 9.98
Buy Now
3rd Party 7.99
In Stock.
See what people are saying about this story or others
See Comments in Forum
Previous Next
Pre-Orders
Tomorrow's latest releases