Academy Award winner Eddie Redmayne and Alicia Vikander star in this remarkable love story inspired by true events from Oscar-winning director Tom Hooper. When Gerda (Vikander) asks her husband Einar Wegener (Redmayne) to fill in as a portrait model, Einar's long-repressed feelings surface and she begins living her life as a woman. Embarking on a groundbreaking journey that's only made possible by the unconditional love of her wife, Einar fights to become the person she's meant to be, transgender pioneer Lili Elbe.

History has a funny way of spoiling films based around true events and real people - information about a person or an event is already out there. So if a film decides to take romanticized fictional liberties with a story, you're one Google search away from learning the real truth and not just what was presented as a fictional truth. Director Tom Hooper's latest effort 'The Danish Girl' is an unfortunate victim of this process of fictionalizing reality to make a story more "cinematic" and appreciable to a mass audience. While the process can sometimes still work, 'The Danish Girl' unfortunately feels gutted of the heart and sense of character bravery it desperately tries to capture.

For professional artists Einar Wegener (Eddie Redmayne) and Gerda Wegener (Alicia Vikander), life is a bit routine, but still splendid as they share a mutual love and appreciation for their work and most importantly - each other. Gerda is ready and willing to do everything for her husband, likewise is Einar. So when Gerda needs Einar to fill in as a model for her ballerina Ulla (Amber Heard). At first, it's just a need to see the shoes and legs in stockings. As Einar caresses the fabric, as he forces his large feet into the small shoes, something begins to surface from deep inside him. When Gerda actually needs to see the lay of the dress over his figure, Einar protests putting it on, but as he holds the garment close to him, he feels a sense of familiarity.

What started out as an innocent game, a bit of fun to see whether or not Einar could pass as a woman for an event and not be realized, turns into something more profound. Einar fully realizes his true self as makeup is applied to his face, as Gerda finds him the perfect wig, and even selects the perfect ensemble to pass as a woman. In this moment, Einar Wegener stops being Einar Wegener and becomes Lili Elbe. On the inside at least. Outside, Lili still must bow to societal conventions and pretend to still be Einar. This process of self-discovery puts a terrible strain on Lili and Gerda's marriage. Is it just a phase? Or is this a new reality of life that Gerda will have to accept. Things become all the more challenging when an old childhood friend of Einar's named Hans Axgil (Matthias Schoenaerts) arrives. As the first to see Lili for who she really is, as well as becoming romantically interested in Gerda, it is because of Hans that the couple meet Dr. Kurt Warnekros (Sebastian Koch) a pioneer in the field in male to female sex reassignment surgery. As Dr. Warnekros details, the process of sex reassignment is still new, radical, and dangerous. As Lili comes to understand the risks to her life, Gerda fully begins to accept the person who once was her husband. 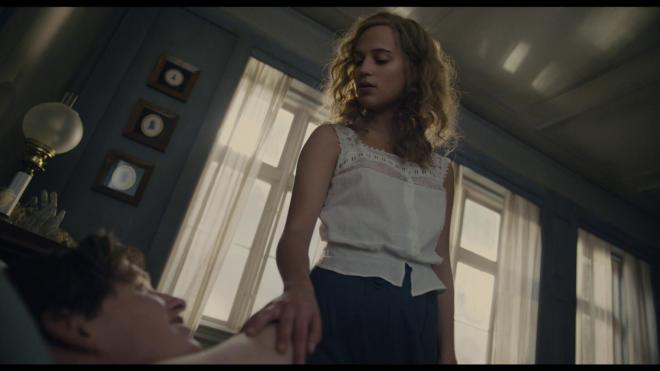 It's probably best said at the outset that if one is going to enjoy and appreciate 'The Danish Girl' you must be willing to accept this film as fiction, not fact, to the point that it may be best to not know anything about the true story. The film is fictional to the point that it is actually based upon the fictionalized novel by author David Ebershoff and not the true case of Lili Elbe or her memoir "Man into Woman." In order to make the story more palatable for readers, Ebershoff changed a number of characters, omitted that Einar/Lili was openly Transsexual and that Gerda herself was an open lesbian who did not paint portraits but instead specialized in lesbian erotic paintings. Gerda and Lili knew who they were at the outset of their relationship so the entire process of self-discovery and coming to terms with the changes a spouse is going through in this film is complete fiction. As a film that tries to portray Einar/Lili's personal interior and exterior transformation as an act of bravery and courage on the part of Gerda to accept her husband, it ultimately guts the meaning of the true story and fails to land the themes it attempts to convey.

To be fair, the results of 'The Danish Girl' are not a fault of its lead stars, Eddie Redmayne as Einar/Lili and Alicia Vikander as Gerda Wegener. The pair is incredible in their respective roles and fully deserve the Oscar nominations and accolades they've racked up. Eddie Redmayne once again proves he's a transformative actor who is capable of incredible physical and emotional range. Vikander is an actress that makes a true leap to the A List with her emotionally powerful performance. But performances alone don't make a great film.

The fault of where this film goes wrong, even as a work of fiction, falls entirely on the heavy-handed direction of Tom Hooper. While I fully enjoyed the man's work on 'John Adams' and 'The King's Speech,' Hooper shows he has little grasp of subtlety - especially when composing his shots. An early scene where Gerda is having her work critiqued by a gallery owner is distractingly distorted as Alicia Vikander's face occupies only the lower left corner of the frame while an out of focus nude portrait of a woman dominates the rest of the image. The very next shot, we see Einar hard at work on one of his tiny landscapes while a gigantic portrait of a woman Gerda was in the process of painting looms over him like a thematic elephant.

The material within 'The Danish Girl' is handled with such kid gloves at times that it begins to quickly feel disingenuous to the cause of gender and sexuality acceptance. As I watched the film I became more and more annoyed with the fictional liberties taken with the real story. There wasn't a Hans Axgil, there wasn't a Henrik love interest for Lili played here by Ben Whishaw. The real Einar/Lili wasn't subjected to radiation therapy to cure her "insanity." As the film progresses it becomes harder and harder to appreciate what is on the screen when the truth looms overhead like the Sword of Damocles. If you want a measure of accuracy and appreciation of the lives of gay, lesbian, and transsexuals during the early 20th century, go find Magnus Hirschfeld's 1919 film 'Different From the Others.' Kino Lorber has released it on DVD. Not only does Hirschfeld showcase his subjects in a normal, non-exploitive manner, he was the doctor who pioneered sexual reassignment surgery and treated the real-life Lili Elbe.

I would never claim to be a historian, nor would I ever dare to put myself out as an expert on the subject matter of the story told in 'The Danish Girl.' However, I do listen to a number of history podcasts and from those scattered few hour-long snippets I gleaned enough information to see that this film is built on a fictitious foundation. 'The Danish Girl' is an immaculately produced, beautiful looking film with incredible performances. If you're able to appreciate it on that level alone, there is some substance to the film. If you're looking to appreciate the film for it's subject matter, I fear you'll find it lacking considering the incredibly dense amount of information that is available.

'The Danish Girl' arrives on Blu-ray thanks to Universal Home Entertainment and is pressed onto a BD50 disc. Housed in a standard Blu-ray case with identical slip cover, a Digital HD voucher is included. The disc opens to a series of trailers from Focus Features and are uploaded through the BDLive function and change each time you load the disc before arriving at the main menu.

Featuring a 1.85:1 1080p transfer, 'The Danish Girl' is an absolutely stunning looking Blu-ray release. Shot digitally, the film is bathed in fine details. From the intricate production design to the period architecture to the lush scenery to fine facial features - everything is on display and appreciable to the viewer. Colors tend to skew towards the cooler blues but primaries still maintain plenty of presence. Flesh tones appear accurate, perhaps a little pale, but that's largely by design I imagine. Black levels are deep and inky-black providing every scene with an incredible sense of three-dimensional depth. Free of any noticeable compression artifacts, this is an absolutely flawless looking transfer.

With a DTS-HD MA 5.1 audio track, 'The Danish Girl' features a strong and beautifully spacious mix. Every scene features a rich sense of dimensionality and atmosphere. While the surround channels may not ever be fully engaged at all times, there is enough presence of background effects to keep the track feeling immersive and present. Helping the mix out greatly is the beautiful score by Alexandre Desplat - it works to fill in some of the deathly silent moments and plays to the themes of the film without being overdone. Dialogue is crystal clear, although some may have a hard time hearing Eddie Redmayne's whispering of many of his lines as the actor is prone to do. On that note, levels are pitch perfect, so if you do have to turn your volume up a little at the outset, you won't have to adjust throughout the rest of the film. All around this is a beautiful mix.

The Making of 'The Danish Girl': (HD 11:29) Featuring cast and crew interviews, this is a very standard EPK piece covering writing, directing, casting, costumes and shooting on location. It's not very in-depth but it does offer some interesting tidbits.

'The Danish Girl' was a film that I was very excited to sit down and see. It features a famous story surrounding one of the first sex-reassignment surgeries ever performed. Sadly, the film decided to take the fictitious approach to the material and loses so much of the strength and importance of the real story. Performances are incredibly impressive and Redmayne and Vikander deserve all of their accolades. I just wish the story itself had been more than it ended up being. Universal Home Entertainment has put out a solid Blu-ray release featuring an absolutely gorgeous image presentation and a flawless audio track. Sadly extras are extremely skimpy. Setting aside my reactions to the film itself it's worth seeing for the performances making this Blu-ray at the very least worth a look.

Sale Price 10.93
List Price 14.98
Buy Now
3rd Party 19.99
In Stock.
See what people are saying about this story or others
See Comments in Forum
Previous Next
Pre-Orders
Tomorrow's latest releases