Newly re-mastered in HD! The masters of classic horror, Basil Rathbone (Tales of Terror), Bela Lugosi (Dracula, White Zombie), Lon Chaney, Jr. (The Wolf Man) and John Carradine (House of the Long Shadows) co-star in this terrifying horror classic about a crazed brain surgeon and his unorthodox experiments at a spooky old dark house. When the wife of a lunatic surgeon (Rathbone) slips into a coma, the doctor sets out to find a donor for a highly unorthodox brain transplant. The subsequent experiments result in the creation of a number of dangerous zombies, mutants and freaks that are soon unleashed on an unsuspecting populace. The stellar cast also includes Akim Tamiroff (After the Fox) and Tor Johnson (Plan 9 From Outer Space). From Reginald Le Borg, the director of horror classics, Diary of a Madman and The Mummy's Ghost.

I really wish I had grown up in the era of the drive-in and midnight movie double features. Sure some of the local theaters near where I live do show the odd duck horror flick from time to time or regular viewings of 'The Room,' but what I really crave is to have been a part of the era that got to see cheap monster movies that Roger Corman, Burt I. Gordon, or Del Tenney directed. These are the movies that I have come to love over the years and make ample room on my shelves for as I add them to my collection, but I wish I had gotten to see them projected on the big screen. I love sitting in my home and popping one on whenever I want, but there is a flavor to the experience that is missing. 1956's 'The Black Sleep' directed by Reginald Le Borg is such a movie. When you have Basil Rathbone, Lon Chaney Jr., John Carradine, Bela Lugosi, and the larger than life Tor Johnson in a movie together, it makes you long for the smell of fresh popcorn and the clickity-clack sound of a projector.

Dr. Gordon Ramsay is a brilliant surgeon with a bright future - or rather he should have a bright future. After being tried and convicted of a murder he didn't commit but had no evidence for an alibi, he is set to hang at dawn. His colleague and mentor Sir Joel Cadman (Basil Rathbone) stops by to pay his respects and give his dear friend a little medication that will make things go smoother. What Cadman actually gave Ramsay is an ancient drug known as "The Black Sleep" whose symptoms mimic death in nearly every respect but doesn't actually kill the patient. Since his captors believe Ramsay is dead, what else are they to do but bury the body?

Fortunately for Ramsay, Cadman arranged to take control of the body so that he and his accomplice Odo (Akim Tamiroff) can shepherd Ramsay to safety. When he awakens from his slumber, Ramsay is understandably confused and shocked to be alive, but then Cadman explains why he's gone to such great lengths to ensure that his protege didn't dangle at the end of a hangman's noose. It turns out that Cadman's beloved wife developed a brain tumor and has slipped into a coma. For months, Cadman has been performing various experiments to find a cure, but now he needs the hands of a skilled surgeon. To Ramsay's horror, he soon learns that with the aid of the mindless servant Mungo (Lon Chaney Jr.) and his mute manservant Casimir (Bela Lugosi), Cadman has been performing damaging, life-altering brain surgeries on the living! As Ramsay desperately tries to find a way to free himself of this horrific nightmare, Cadman's assistant the beautiful Laurie (Patricia Blair) shows him the true depths of the horrific experiments and how no one is safe under Sir Cadman's care. 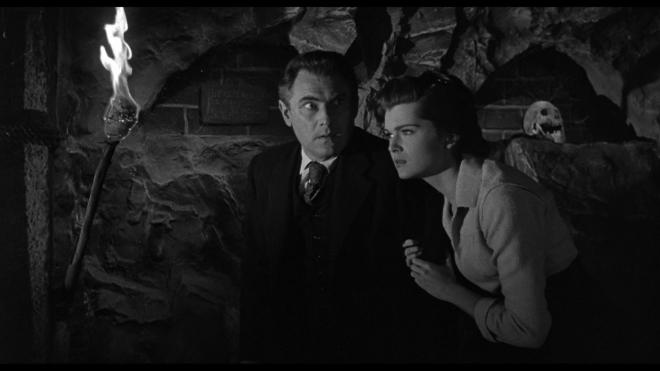 'The Black Sleep' is a movie that feels like 'The Expendables' of B-list monster movie actors. Sadly for so many of these fine actors, this film was a means to an end rather than a showcase of their talents. While they were most certainly there to collect a quick paycheck, that didn't hold them back from delivering great performances. While the story itself is relatively thin, it does serve the purpose of getting these legends of the silver screen back in front of the camera. Even though Bela and Lon are mute in their respective roles, they still manage to steal each scene they're in, and the movie only gets better once John Carradine and Tor Johnson show up!

'The Black Sleep' is perfect midnight movie drive-in theater fodder. It's got a slim horror story expounding on a topic of medical pseudo-science that few know anything about. It's got a cast of familiar faces and amazing character actors. And then you have the monsters. The movie works it's plot just enough to keep your interests piqued and holds your attention because you know deep down that just around any corner Tor Johnson could be lurking! It builds the suspense and anticipation, teasing you with some less-than-subtle facial acting by Lon Chaney Jr., a couple appearances by Bela Lugosi and then it lets the cat out of the bag. While some may feel like the big reveal of John Carradine and the rest of Cadman's surgical monstrosities may come a tad late in the show and rush the ending a bit, it still works and is a genuine payoff for the movie that you've sat waiting through for 80 minutes. While hardly a perfect horror film, 'The Black Sleep' is perfectly good fun!

'The Black Sleep' arrives on Blu-ray thanks to Kino Lorber and their Studio Classics line. Pressed onto a Region A locked BD25 disc, the disc is housed in a standard Blu-ray case and opens directly to a static image main menu with traditional navigation options.

Generally, I don't expect too much from these Studio Classics releases as the bare minimum effort is given to most titles, but I'm pleasantly surprised at the quality of the 1.85:1 1080p transfer provided for 'The Black Sleep' Considering this film was obviously shot on the cheap featuring small cramped sets with little production value to make things look beautiful or artfully interesting, the amount of film grain provides the right detail levels to keep the image appreciable. Facial features, textures, and clothing are all easily visible and if there is monster makeup on display, all the better! The greyscale is in fine order providing rich and deep black levels with enough separation to ensure that there is a sense of space and dimension to the image. Really the only negatives I have to report are a couple instances of what look like tears or slices in the print that flicker briefly and disappear and some slight speckling throughout the run of the film. Otherwise 'The Black Sleep' makes an excellent HD debut on Blu-ray.

'The Black Sleep' arrives with a strong, but hardly remarkable DTS-HD MA 2.0 audio track. The dialogue is front and center and dominates virtually every scene. The score is kept to a minimum unless something particularly creepy is about to happen or to provide a stinger for a particular cast member's appearance. Sound effects are generally present and have enough space around them to give some scenes a sense of dimension, but otherwise, there's little movement or imaging. The trouble for this track comes in the form of some persistent albeit subtle hiss that is just audible. It's not terribly distracting or detrimental to the viewing experience, but it is there and once you notice it it's hard not to keep hearing it. Another issue of note is a very noticeable drop off in the levels towards the climax of the film as if someone sat on your sound system's remote and suddenly lowered the volume. it doesn't completely collapse, but it's a bit jarring and you may feel the need to crank things back up a bit.

Audio Commentary: Film historians Tom Weaver and David Schecter provide a fun and engaging look at this film. It's mostly made up of anecdotal material but it still provides enough information to be worth a listen.

Trailers From Hell: (SD 2:02) Joe Dante goes into a brief bit about why he loves this movie so much and the casting of some of his favorite monster actors. I really wish these "Trailers from Hell" segments were longer than they are. They're so much fun to watch a particular filmmaker totally geek out on one of their favorite movies. Dante clearly has a lot more to say than what's contained within these two minutes.

Animated Image Gallery: (HD 2:00) Contains a mix of stills from the film as well as a host of publicity shots and posters used for the marketing of the movie.

'The Black Sleep' is a classic piece of drive-in cinema in all of the best ways. It's cheap-looking, has a slightly goofy yet still creepy premise and features some of the best stunt casting ever assembled for a monster movie. It's a lot of fun and a great way to spend a damp and rainy evening on the floor in front of your television set with the lights out. Kino Lorber has done a fine job bringing 'The Black Sleep' to Blu-ray offering a splendid image, a serviceable audio track and a collection of halfway decent extra features. 'The Black Sleep' is a recommended Blu-ray purchase.

Sale Price 15.69
List Price 29.95
Buy Now
3rd Party 15.69
In Stock.
See what people are saying about this story or others
See Comments in Forum
Previous Next
Pre-Orders
Tomorrow's latest releases