Love is the only lead worth following! Tom Berenger (Shattered) and Anne Archer (Fatal Attraction) team with an all-star cast, including Elizabeth Perkins (He Said, She Said), Ted Levine (Ali), Ann Magnuson (Panic Room), Kate Capshaw (Love Affair) and songwriter Neil Young, in this "giddy, quirky and wonderful-to-watch movie" (Judith Crist) that delves into more than just the mysteries of love! Harry Dobbs (Berenger) takes his job as a private detective seriously. Hired by a mysterious seductress (Archer) to follow her boyfriend, Harry soon discovers that the man he's following is not so much the marrying kind...as he is the murdering kind! And it'll take the help of another sleuth (Perkins) - hired to keep an eye on Harry - to capture this dangerous lothario and steal Harry's heart in the process!

Tone is something that I've mentioned in previous reviews. It's an important element to every film that needs to be strongly in place in order for a film to work. You can't have a comedy and fill it with horrible grotesque human atrocities, likewise, you can't have a thriller that features pratfalls and fart noises for levity. That isn't to say you can't blend things a little bit, but the film needs to have a strong foundation to work from. 1990's 'Love at Large' written and directed by Alan Rudolph and starring Tom Berenger, Elizabeth Perkins, and Anne Archer is a movie that tries to be a gritty noir detective thriller, a bumbling detective comedy, a romantic drama, and a romantic comedy all rolled into one - the results are a tad confusing to say the least.

Harry Dobbs (Tom Berenger) is a private detective who hung up his own shingle and is doing the dirty work for himself and his live-in girlfriend Doris (Ann Magnuson). The only problem is Doris doesn't exactly trust Harry so when the mysterious Miss Dolan (Anne Archer) gives Harry a call offering him a job, Doris goes ballistic. With Doris nagging on him, Harry is all too happy to take on a big-paying job to follow a guy named Rick. The only problem is Harry spots the wrong guy and ends up following a guy by the name of Fred King (Ted Levine) while the real Rick (Neil Young) starts to make threatening phone calls to Miss Dolan.

Harry, still thinking he's on the right track, follows Fred all over town - and then out of state where it turns out Fred is a bit of a bigamist. Fred is also known as James McGraw and has another wife and family on a ranch. So while Harry believes he's doing a good job tracking down "Rick's" infidelities, he's actually bungling the entire case. It doesn't help things when a pretty young detective by the name of Stella (Elizabeth Perkins) shows up tailing Harry. As the two detective's start working the same case, they quickly learn that their mutual attraction for one another could come with a risky price tag. 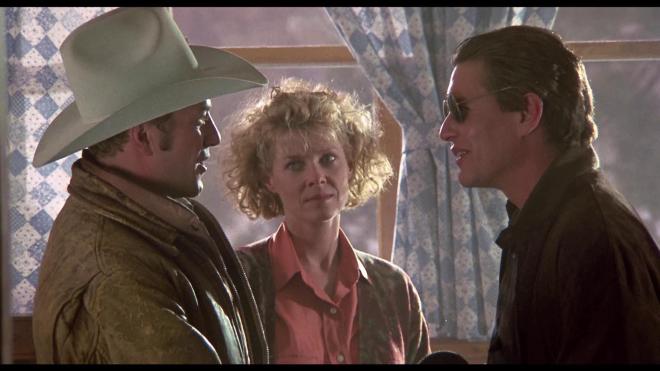 'Love at Large' is just a strange movie. Released in 1990, it looks like a film shot in the late 80s that is trying to be a detective movie from the 1950s. The way people talk, their manner of doing things, Harry's need to wear a hat even though he sports a deconstructed Chess King jacket are just a few examples of how the various elements of this film fail to come together. One starts to believe that the film is going to be a bit of a comedy because Harry has marked the wrong man and is in fact, doing a terrible job. When that story goes nowhere, the new young love interest trope is tossed in because clearly Harry isn't going to end up back together with Doris. By the time this mess of a plot gets resolved, it becomes such a mashup of cliches and plot conveniences that none of what you saw matters in the least bit.

Probably the best way to describe the performances within 'Love at Large' is "unique." Anne Archer is playing up the sexy demure film noir "dame" angle to the hilt. She keeps the schtick up for so long that you can't help but laugh at her character, even though the circumstances surrounding her character as the target of a mad jealous killer is hardly humorous. Then you have Tom Berenger as Harry Dobbs. I don't know if it was his idea to croak all of his lines out like a frog, but after listing to him for an hour and a half, I wanted to get the man a cough drop. About the only well-rounded and cleanly drawn characters are Elizabeth Perkins' Stella and Ted Levine's Fred King - sadly we don't get nearly enough time with either of them.

While I thought 'Love at Large' was an odd movie, I can see how some people who don't want to have to think about a movie to enjoy it could find it charming. It does have some fun moments, and I'll admit that I was entertained by it, it's just I wish the tone had been more consistent. If you're up for a quirky, strange movie, 'Love at Large' isn't the worst movie you could pick, but if you want something a little more fulfilling, I'd suggest you look elsewhere.

'Love at Large' arrives on Blu-ray thanks to Kino Lorber and their Studio Classics line and is pressed onto a Region A Locked BD25 disc. Housed in a standard case, the disc opens directly to the main menu.

With a 1.85:1 1080p transfer, 'Love at Large' doesn't look half bad, but at times, you can't shake the feeling that the film could look better. While film grain is apparent throughout and there are some halfway decent details to appreciate, the image also features a softness to it that leads me believe a little smoothing was applied in some places. Well-lit scenes look the best while darker moments lose some of the film's luster. Contrast also looks to have been kicked up a notch or two as black levels never quite as solid as they could look. There is still a fair sense of depth, but again as I said before, it could look better. Colors are pretty good, but primaries never really leap off the screen. Flesh tones look fine. My wager is this is an older sourced master from the previous DVD release that was simply upticked for Blu-ray. While the results are okay, they don't exactly "wow" either.

With a DTS-HD MA 2.0 audio track, 'Love at Large' actually sounds pretty good. Without any age related issues or hiss, this is a clean and clear track. Dialogue is easily heard and never an issue when working against sound effects or the film's sexy sax-infused score by composer Mark Isham. There is a nice sense of atmosphere and presence throughout that makes the film sound alive and dynamic. Imaging is also pretty good as there is just the right amount of channel movement to keep the activity on screen sounding interesting. Levels are bit tricky in some places, there are a number of phone conversation moments where the adjoining scenes showcasing who is talking create the need to adjust your volume a tad, but nothing too terrible.

I found 'Love at Large' to be an entertaining albeit strange movie. Its mashing of genres isn't very clean as it's not quite a true comedy nor is it a gritty detective thriller. It still turns out to be a good escape for 97 minutes. Kino Lorber has brought the film to Blu-ray with a decent A/V presentation and only a trailers for extras. It's an okay movie, but not one that I'd recommend beyond a rental unless you're a true fan of the flick.

Sale Price 21.99
List Price 29.95
Buy Now
3rd Party 19.38
In Stock.
See what people are saying about this story or others
See Comments in Forum
Previous Next
Pre-Orders
Tomorrow's latest releases