If you believe playwright Lillian Hellman, on whose memoir Fred Zinnemann's Oscar-nominted drama is based, she was a childhood friend of Hellman's who eschewed her privileged upbringing to become a brazen anti-Nazi freedom-fighter in pre-World War II Austria. By forging passports and smuggling cash to fascist resisters, Julia helped hundreds of Jews and political dissidents emigrate to the West. An episode in Hellman's highly acclaimed book, 'Pentimento,' profiles this courageous woman, and chronicles how Julia secretly tapped Hellman to undertake a dangerous mission in service to the cause.

Fascinating? Without a doubt. True? Well, maybe. Questioning the validity of memoirs is a common pastime today (remember the cause célèbre that consumed author James Frey a decade ago?), but for years controversy has hounded and tainted 'Julia.' Ironically, Hellman's first hit play, 'The Children's Hour,' examines the power of a lie, and how a simple fib laced with a kernel of truth can forever alter, and even destroy, innocent lives. Though no one has been harmed by Julia's story (unless one considers a bruised ego an injury), it's now widely believed that in 'Pentimento,' Hellman — of all people — told a whopper.

Oh, Julia existed all right, but probably not in the form Hellman would like us to believe. In real life, many claim, she was Dr. Muriel Gardiner, an esteemed psychoanalyst whose background, ideology, and exploits closely mirror Hellman's heroine (and are recounted in Gardiner's own autobiography, 'Code Name Mary: Memoirs of an American Woman in the Austrian Underground'). Hellman supposedly learned of Gardiner's tale through a mutual friend, "borrowed" and embellished it for 'Pentimento,' and inserted herself as a character to add immediacy and impact. There's no evidence the two women ever met, let alone shared an intimate friendship. And the idea Hellman carried concealed cash into Nazi Germany? Hogwash, says the intelligentsia. Yet for years, Hellman ardently denied fabricating the mission, Julia, and their long personal history together.

Both Hellman and Gardiner are now dead, but the debate lives on, as does 'Julia,' and its long-overdue Blu-ray release will surely stoke the embers anew. Zinnemann's fine film, however, rises above the fray. Its 11 Oscar nominations (including ones for Best Picture and Best Director) and three wins notwithstanding, 'Julia' remains a meticulously crafted, beautifully acted, suspenseful, and inspiring piece. When I first saw it as a 15-year-old during its original theatrical release, it made a deep impression on me, opening my eyes to the insidious seeds of Nazism, the passion and courage of those who fought it, and the powerful bond of friendship. In the intervening four decades, other films have addressed those topics more incisively, thus dulling the impact of 'Julia,' but Zinnemann's lush visuals and Alvin Sargent's Oscar-winning script keep it a compelling and affecting work.

As do the performances. Jane Fonda may have lost the Oscar to Diane Keaton's Annie Hall, but she etches her finest character portrait as the fiery yet insecure Hellman. With admirable restraint, Fonda captures the playwright's creative frustrations, intense attachment to Julia, and slow awakening to the devastating issues facing the world. Hellman's relationship with Julia dominates the film, but her stormy on-again-off-again romance with hard-drinking novelist Dashiell Hammett (Jason Robards in an Academy Award-winning turn) equally resonates. In other roles, Maximilian Schell (also Oscar nominated) contributes an excellent cameo as the intermediary who sets up Hellman's mission, and Meryl Streep — in her film debut, and almost unrecognizable in a jet-black wig — makes a brief splash as one of Hellman's haughty society friends.

Julia, however, is the film's pivotal character. Though only sporadically seen (and often as a juvenile in flashback), she orchestrates the action and constantly occupies our thoughts. Today, Vanessa Redgrave is perhaps better remembered for her notorious Oscar acceptance speech (in which she famously referenced "Zionist hoodlums") than for the performance that won her the award, but hopefully this Blu-ray release will put the focus back on her subtle yet luminous work. I've said it before, but it bears repeating...Redgrave transmits more with a blank stare than most actresses do with an exhaustive monologue. Her minimalist acting reminds us of Hemingway's prose — terse yet poetic — and like Garbo, we endlessly search her beautiful, cryptic face for clues. She gives away so little, and at the same time so much, it's impossible not to be entranced by her.

And, as a result, by Julia...whoever she is. 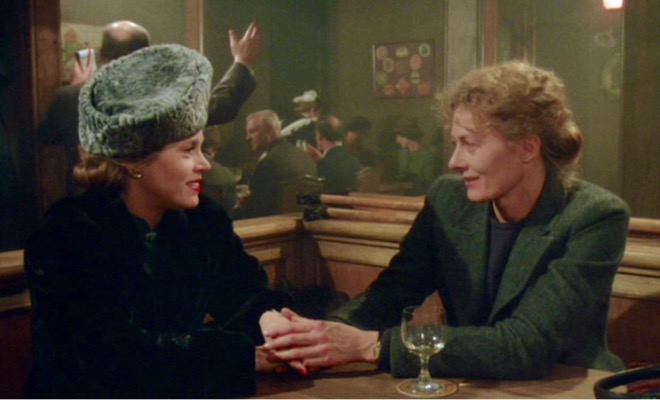 'Julia' arrives on Blu-ray in a limited to 3,000 edition packaged in a standard case. An eight-page booklet featuring an essay by Twilight Time columnist Julie Kirgo, assorted scene stills, and a reproduction of the film's poster art is tucked inside the front cover. Video codec is 1080p/AVC MPEG-4 and audio is DTS-HD Master Audio 1.0. Once the disc is inserted into the player, the static menu with music immediately pops up; no previews or promos precede it.

Fox took special care with the 2006 'Julia' DVD transfer, and the studio has produced a similarly stunning 1080p/AVC MPEG-4 upgrade for Twilight Time a decade later. Though the initial scenes seem slightly fuzzy and flat, the bulk of the film enjoys fine clarity, contrast, and color saturation. Cinematographer Douglas Slocombe, who received an Oscar nomination for his work, gives the picture a rich period look, much like the studio movies of yore, and his shots of European cities, bucolic landscapes, and the stark Atlantic coast are often breathtakingly beautiful. Slocombe also knows how to shoot a close-up, and lends both Fonda and especially the luminous Redgrave a natural and glamorous glow. Grain levels fluctuate, with exterior scenes looking cool and crisp, while interiors exude a cozy warmth, and rich black levels nicely shade the image. Shadow detail is a bit weak, but any print blemishes left over from the previous DVD have been scrubbed away, leaving a clean, vibrant picture that will surely delight fans of this '70s classic.

The DTS-HD Master Audio 1.0 track doesn't possess much oomph, but provides clean, clear sound. The levels seem slightly low and require a greater than normal volume boost, but once the track is tweaked it performs well. Fonda and Redgrave possess lovely, distinctive speaking voices, and it's a treat to hear them converse, while the gravelly tones of Robards spike the audio with salty accents. All the dialogue is easy to comprehend, even when spoken in European dialects, and the understated music score blends seamlessly into the mix. The overall soundscape is somewhat subdued - the limited ambient effects don't make much of an impression - but rushing streams, the clatter of railroad cars, and one notable scream provide welcome aural bursts. No age-related defects, such as hiss, pops, or crackles, intrude, and distortion is utterly absent. 'Julia' is a quiet, introspective film, and this workmanlike track never draws attention to itself.

Aside from the original theatrical trailer, which runs just under three minutes, and an isolated score track, which highlights the haunting Oscar-nominated music of composer Georges Delerue in lossless stereo, the only extra is an audio commentary featuring actress Jane Fonda and film historian Nick Redman. Fonda's participation is a real treat, and though she often has trouble remembering the film's plot and specific production details, her musings and perspective provide invaluable insights into her life, personality, and craft. She recalls the genesis of the project, how director Nicolas Roeg was originally attached to it, and her relief when he was replaced by Fred Zinnemann. (According to Fonda and Redman, Roeg planned to focus on the alleged lesbian relationship between Lillian and Julia, which made Fonda uncomfortable.) She also remembers meeting Hellman, whom she referred to at the time as a "homely woman who moved like Marilyn Monroe," and wishes she could have spent more time with her so she could have better emulated her look and vocal timbre. Fonda shares her initial impressions of Meryl Streep, talks about her friendship with Redgrave ("she put starch in my spine over the years"), and notes she and Redgrave agreed not to talk politics during the course of shooting because their views clashed. In addition, Fonda debunks some rumors that have swirled about the film, gets noticeably emotional as she watches her climactic scene with Redgrave, and speaks frankly about her early insecurities, political involvement, and other films in which she appeared. Though at times a bit stilted, this dialogue is always informative and enlightening, and well worth a listen.

Almost 40 years later, 'Julia' remains one of the most affecting films of the 1970s. It may lose focus and drag a bit toward the end, but it's still an artfully constructed, beautifully acted, and emotionally impactful piece that celebrates friendship, political activism, and inner strength. In his penultimate production, director Fred Zinnemann displays yet again his meticulous craftsmanship, while Jane Fonda contributes the performance of her career as playwright Lillian Hellman and Vanessa Redgrave makes an indelible impression as the socially conscious titular character. Twilight Time's Blu-ray presentation features an upgraded video transfer, but the audio is ho-hum and extras are sparse. Still, the film's substantial merits outweigh any disc deficiencies and earn 'Julia' an enthusiastic recommendation.