In the French Style

It's tough to watch a movie that is genuinely trying to be something real and present and make a statement about contemporary times when the material just isn't there. The cast may be perfect, the director may be at the top of his game, it could be shot by a legendary cinematographer, and yet the pieces just don't mesh as cleanly as they should. Such is the case of Robert Parrish's 'In The French Style' starring Jean Seberg as a free-spirited American living in Paris who navigates her career as an artist while in the search of meaningful relationships.

Young and beautiful, Christina James (Jean Seberg) has just arrived in Paris. As an art student, this is the place to be for any aspiring artist to gain the acclaim they seek for their artistic vision. It's also a city for lovers, something Christina doesn't have much experience with. She's been so committed to her perfecting her craft that she never gave men too much attention, that is until she meets the brash and romantic Guy (Philippe Forquet). Guy challenges Christina's conventions as a young American woman and as an artist in ways she never thought possible. But when the possibility of a relationship is suddenly cut short, Christina is left to chart her own course in a city that is new to her with few people to call friends.

Three years later and Christina has emerged within the Paris art scene. She's successfully navigated the turbulent waters of success and love and has become a regular sight at gallery openings and performances. She's even managed to find love in the hard-drinking sullen reporter Walter Beddoes (Stanley Baker). Walter leads a hectic lifestyle traveling from one war zone to the next covering big stories. His work always comes first and he does what he can to dissuade Christina from loving him, but she's all in. It doesn't matter to her that he would be gone for months at a time, her heart is with his. While Walter is away on assignment, Christina's father (Addison Powell) comes to Paris. At first, Christina believes it's just for a simple visit, but it quickly becomes clear that her father is there to take her back home wooing her with his vast fortune. Christina now has to choose between her father or love and a career as a struggling artist. 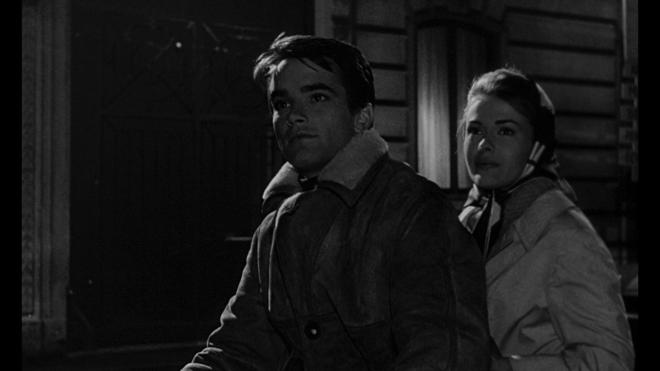 'In The French Style' feels like a story missing its second act. The film opens with Christina's arrival in Paris, her meeting Guy, and then spends the next forty minutes showing their growing relationship. Watching these moments unfold you feel like this is the movie you're going to be watching, and you're fine with it. It's not the most original story ever made, but the playful style of Parrish's directing, the fluid and fun script by Irwin Shaw and the great chemistry between Jean Seberg and Philippe Forquet makes for a compelling bit of romantic entertainment. Then the film abruptly drops that story completely and abruptly segues three years into the future and Christina is a bit more jaded, but much more confident with herself and her needs as an artist and as a woman. You would think that Christina and Guy's romance would rekindle in some fashion, but it doesn't. The film becomes something else entirely and the shift in tone and story focus feels clunky and inorganic to everything we just saw.

When Addison Powell arrives as Christina's father, the film looses a lot of energy and forward momentum. There's never any doubt why he's there. This isn't a visit to see his daughter but to judge her slightly bohemian and expressionist lifestyle. It's difficult to say whether or not the inclusion of Christina's father is to be some sort of commentary on the artist scene in the 1960s, it just feels tacked in. As is the relationship between Christina and Stanley Baker's reporter Walter Beddoes. As these new characters enter the show, come and go, and the little impact they leave on the story we've witnessed thus far, it's easy to see that the real film played out in the first half. Had the script been rewritten and focused a bit more on the turbulent romance of Christina and Guy, 'In The French Style' might have had something real to say about life, love, and art. In this final form, it's difficult to look at it as anything more than a film that failed to match its potential. As I said at the outset, the elements are in place, but they needed a little more refining to make a genuinely fulfilling cinematic experience. This isn't to say that 'In The French Style' is unwatchable or a bad film, there is a lot to take in and admire, but the final experience may leave some out in the cold as I am only lukewarm towards it.

'In The French Style' arrives on Blu-ray thanks to Twilight Time and is limited to 3000 units. Pressed on a Region Free BD50 disc, the disc is housed in a clear Blu-ray case and comes with a booklet featuring a very good essay Julie Kirgo. The disc opens directly to a static image main menu featuring traditional navigation options.

'In The French Style' arrives with a splendid 1.66:1 1080p transfer. For a 53-year-old back catalogue title, it has hardly aged a day. The print sourced for this transfer is in immaculate shape. Other than some extremely brief speckling around the opening credits and a very faint scratch or two, this film looks brand new. Film grain is visible without being noisy and provides the image an incredible amount of detail. Facial features, costuming, the production design that went into creating Christina's art studio, all details are apparent and easy to appreciate. The film's black levels and grey scale are in great shape giving the film a deep and inky appearance without any crush or contrast bloom issues. The transfer is free of any compression artifacts making it a fantastic release.

'In The French Style' arrives with a strong and natural sounding DTS-HD MA 1.0 mono track. As a very dialogue-heavy film, this track shines. Every character's spoken word is clearly heard without any breaks or drop outs in the track. Some voices sound as if they were dubbed in by different actors and can sound a tad unnatural, but that isn't a fault of the track so much as the original recording mix. The score by Joseph Kosma is wonderfully romantic and subtle and plays to the backgrounds of the scenes without overpowering the moment. The track is very well balanced even for a mono presentation as scenes have a notable sense of space and dimensionality to them ensuring the characters sound as though they're occupying real rooms and not sets. All around this is a fantastic mix that is free of any age-related issues or problems.

Audio Commentary: Historians Lem Dobbs, Julie Kirgo, and Nick Redman offer an interesting if slightly subdued commentary track. They have an appreciation for the film, but they often struggle with finding positive things to say about it as the final act kicks in. The anecdotes they provide are more of the technical side and in appreciation of actress Jean Seberg.

'In The French Style' tries to say a lot about life, love, art, and female sexuality, but ultimately doesn't add much to the conversation. Considering this film was made in the 1960s, its frankness towards the affairs of a young woman in Paris is appreciable but its clunky second and third acts don't help to make a cohesive and dramatic story. The performances from the cast are worth the price of admission if the story may not quite do it for you. Twilight Time has brought the film to Blu-ray with an absolutely gorgeous A/V presentation. Extras are slim, but the Isolated Score track is a real treat. Fans of the film should absolutely add this one to their wish lists. If you're new to the film, consider it worth a look.