A Prayer for the Dying

It's important for a film to have a theme, an underlying idea or message that works within a film. This is what the story is actually about, not what the characters are going through or doing on screen, that's just plot that should work in service to the story. That said, the theme should be the subtext, only in rare cases should it ever be explicitly stated. Some filmmakers can subtly state what their film is actually about, while others insist on hitting the audience over the head with the material. Director Mike Hodges' 1987 film is essentially about a murderer with a crisis of faith. The material is already pretty thick, but some heavy-handed visuals and genre conventions bog down what could have been a taught yet dramatic thriller.

Martin Fallon (Mickey Rourke) was a man with a cause, his heart was with the IRA and he was willing to do anything and everything for a free Ireland - even kill. When a bomb he helped build and plant on a rural road detonates too early and blows up a bus full of school kids, Martin loses his path. When the military starts hunting him and his partner Docherty (Liam Neeson), Martin flees to London so he can book passage to America and put the war behind him. There's just one problem, the English customs officials now know the name Martin Fallon, they know he's wanted for a horrible crime. That means Martin needs forged documents to get out of the country which puts him in the crosshairs of the slimy crime boss Jack Meehan (Alan Bates).

Meehan doesn't want money for these documents, he has plenty of that, what he wants in exchange is a service. He wants Martin to do what he does best and kill a man. Martin reluctantly agrees, telling himself and his soul it'll be the last one. When Martin kills the man kneeling beside a gravestone, Father Michael De Costa (Bob Hoskins) witnesses the crime and see's Martin's face clear as day - but Martin can't execute this man. Meehan expects all loose ends to be taken care of, but Martin doesn't want to fire a single bullet. Instead, he visits the priest during confession forcing Father De Costa's holy vows run into conflict with the needs of the police. Now that Martin has taken this route, Father De Costa makes it his mission in life to save Martin's soul and show him that if he really turns to God, God is capable of forgiving even the worst of crimes. 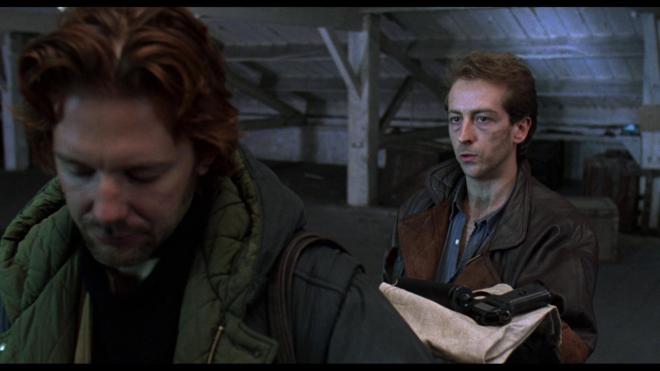 I usually enjoy films that deal with some sort of duality with human nature. I like films with morally gray characters who are relatable in some way. 'A Prayer for the Dying' finds its strength in these areas with the interplay between Fallon and Father De Costa. Mickey Rourke's Martin Fallon is a killer, a beast but he is also an artist of sorts. A tender soul corrupted during a dangerous time. By contrast, we have Bob Hoskins Father De Costa who was a former British SAS commando, a killer in his own way who got so fed up with death that he turned to God to save his soul. It's on this level that the film works best. Their interplay is some solid dramatic material full of subtext and themes and ideas that aren't overtly stated but simmer just below the surface to keep your attention focused on the two great actors.

Where 'A Prayer for the Dying' starts to run aground is with the B and C side stories. Story B we have a British Gangster in the form of Alan Bates' Jack Meehan. Meehan is a man who has had a stranglehold on the community for decades and the cops want to nail him and this murder committed by Martin and Father De Costa is the key. This element should have worked, but it is unfortunately undercooked. We're supposed to fear Meehan because his "legit" business is a crematorium which actually provides them a convenient means to dispose of bodies, but we never really feel them as a threat or with enough menace to sense that either Martin or Father De Costa's lives are actually in danger. Had it been one of the real life Kray twins, for example, Martin or De Costa would have been dead or physically threatened long before the second act was over. Bates certainly looks and sounds threatening, but the character's bite doesn't quite measure up to the bark.

Story C is an odd one that could have been cut entirely and the movie wouldn't even have noticed it. This revolves around Liam Neeson's Docherty searching for Martin throughout London. Because Martin fled without giving any word to the IRA commanders, Docherty has been charged with finding his friend and bringing him in for debriefing. If Martin doesn't come in willingly, Docherty has orders to kill his best friend on the spot. On top of that there is a D story where a second assassin has been assigned to do the job should Docherty fail. It's just too much story that distracts from everything else. If we're supposed to fear the fate of Marin in the hands of either the police or Jack Meehan, all of this extra IRA baggage just slows the film down and thins out the proceedings. Things get so thin that once the film crescendos, it falls back on typical 80s action movie tropes to move things forward with enough heavy-handed religious iconography that the subtext hits the audience over the head with a sledge hammer.

This isn't to say that 'A Prayer for the Dying' is a bad movie, it does have several very strong points, it's just that when you take into account all of the baggage holding it back, it could have been better. The film spends just too much time keeping Mickey Rourke and Bob Hoskins apart and then throws in a love plot involving Hoskins' blind sister Anna played by Sammi Davis and Martin for extra depth - as if to say this blind woman is the only one who can truly "see" him for who he is. It's a lot of parts that don't always work together. The end result is a film that is well meaning, and well acted, but very clunky.

'A Prayer for the Dying' is brought to Blu-ray thanks to Twilight Time and is limited to a release run of 3000 units. Pressed onto a Region Free BD50 disc, the disc opens directly to the film's static image main menu featuring traditional navigation options. The disc is housed in a standard clear Blu-ray case and comes with a booklet containing stills from the film with an essay by Julie Kirgo.

Featuring a 1.85:1 1080p transfer, 'A Prayer for the Dying' makes a wonderful leap to Blu-ray with this well-detailed and colorful transfer. From the film's opening shots in Northern Ireland to the outskirts of London, this transfer is often stunning to look at. The image captures the deep rich greens and earth tones while allowing the cooler blues and grays of London to come through. Primaries have plenty of presence without dominating the image. Film grain is retained throughout and provides the image a strong sense of depth and dimension. Facial features, clothing, Father De Costa's run down church provide plenty of interesting details to appreciate and are readily visible. Black levels are deep and inky throughout most of the film giving the image plenty of depth. Some of the darker scenes, in particular, the climax, can show some slight crush as characters with dark clothing can start to look like floating heads, but nothing so terrible to be a deal breaker. All around this is a very solid transfer from a print that is free of any notable damage and only occasional speckling.

'A Prayer for the Dying' comes with a very strong DTS-HD MA 2.0 audio mix. For a film dealing with murder, bombings, and the mob, it's a very somber and conversational film and the track handles the dialogue requirements admirably. The only issue at play isn't the fault of the mix but the actors with fake accents that are a little too ripe in some scenes. Sound effects and ambients allow the track some sense of space and dimension. Imaging is pretty decent as there is a fair bit of channel movement, but again because of the tone of the film, there isn't a lot of directionality at play. The real stand out of this mix is Bill Conti's excellent score as it fills a lot of the dead air moments and rounds out mix without dominating any given scene. All around a fine audio track that serves the nature of the film well.

Interview With Director Mike Hodges: (HD 29:01) Mike Hodges offers a ton of great information about the production and his approach to the material as a lapsed Catholic himself. The casting stories are also interesting and how Hodges had a knack for getting actors to play against type.

Interview With Director of Photography Mike Garfath: (HD 11: 54) A very good interview that gives the film's cinematographer a chance to discuss his career, the imagery of the film, and shooting the film. It's also cool to hear about his long working relationship with Director Mike Hodges.

Theatrical Trailer: (HD 1:53) This trailer is actually kind of funny as it makes it play too much like a run and gun action movie.

'A Prayer for the Dying' is a flawed film, but it also is one that tries very hard to deliver convincing relatable characters who have questions about morality, humanity, and faith. Rourke and Hoskins play brilliantly off each other and the film should be watched for those merits. It may be clunky and uneven in some places, but the it works. Twilight Time has done a fine job bringing this film to Blu-ray with a top notch AV presentation and some pretty decent extra features. Fans of the film shouldn't hesitate a purchase. If you're new to the show it's absolutely worth a look. It's not a great movie, but you might find it entertaining and worth adding to your collection.