Based on the Leon Uris best-seller, Exodus (1960) is an epic tale about the late-1940s creation of the state of Israel.  Passionately directed by Otto Preminger and adapted by Dalton Trumbo, the film features an all-star cast – Paul Newman, Eva Marie Saint, Ralph Richardson, Peter Lawford, Sal Mineo, Jill Haworth, Lee J. Cobb, David Opatoshu, and John Derek – in a sprawling and phenomenally moving narrative underscored by the Academy Award®-winning music of the great Ernest Gold featuring the restored original six-track stereo sound, sourced and meticulously restored from the only surviving element.

"We have no friends, except for ourselves. Remember that."

Dramatizations of historical events are nothing new. It's a great way to recapture and compartmentalize an event and bring it to an audience who may not have experienced it. It's in this way that films can be a sort of educational experience. That is, of course, if they're presented in an accurate and concise manner that allows people to experience some of the details without too much cinematic embellishment. 'Exodus,' based on the Leon Uris novel is a semi-fictionalized account of the founding of Israel in Palestine. Directed by Otto Preminger and written by the legendary Dalton Trumbo fresh off his turn as a blacklisted screenwriter, 'Exodus' packs in a lot of story and tends to feel overly long and unfocused. Even the presence of amazing actors such as Paul Newman, Eva Marie Saint, and Lee J. Cobb fails to raise the material above the level of a rote dramatization.

Following the end of the second world war, the Jews are flooding into Palestine attempting to return to their religious and cultural homeland. Since Palestine is under British control, this influx of immigrants poses a real threat to their hold on the land as these migrating Jews hope to form the free Jewish state of Israel. As boatloads of jews enter Cyprus, they're stopped by British soldiers and either turned away or placed into prison camps until deportation arrangements can be made. Ari Ben Canaan (Paul Newman) a commander of the Jewish underground Haganah puts a plan in motion to free his captive people. By freeing the 611 people who recently arrived at Cyprus aboard The Star of David, they will send a message to the United Nations that no alternative but a free Jewish state within Palestine will be accepted.

As Ari works to infiltrate the British command, recent widow Kitty Fremont (Eva Marie Saint) becomes involved with the plight of the people being held on Cyprus. As she works as a nurse, she meets a young girl named Karen (Jill Haworth) who is trying to find her father who was held in a Nazi death camp. Karen has no idea if her father is alive or dead, but her faith drives her - even when Kitty offers the young girl the chance to move to America. When Ari enacts his plot to get his people out of Cyprus to Palestine, Kitty comes to learn the true strength of the Jewish faith. With the British blocking the harbor, all of the people on board begin a hunger strike, they would rather die for their faith than live in subjugation.

When the British will breaks and they allow the newly named ship Exodus to sail onward to Palestine, Ari and the rest of the Jewish immigrants face another uphill battle. The free state of Israel is about to be decided by a vote at the United Nations, but there are those who feel this diplomatic process won't work to the Jews' favor. Brothers Barak Ben Canaan (Lee J. Cobb) and Akiva Ben Canaan (David Opatoshu) find themselves on opposite ends of the battle. Barak feels that peaceful protest and negations are the only way while Akiva feels that acts of violent force and sabotage are the way to earning the free state of Israel. 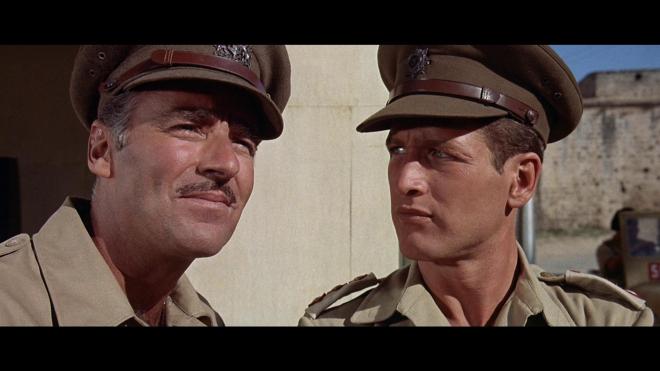 At nearly three and a half hours, 'Exodus' feels both entirely too long and too short. It's a frustrating contradiction because so much of the film is a beauty to watch featuring an incredibly talented cast. The primary issue with the film is how it's broken up into three distinct acts that don't really complement one another. As one story arc feels likes it's about to get going with a certain set of characters, the film suddenly drops them and moves on to a different story beat. As a result, the audience is kept at arms length from a number of the important characters or historical events and the film fails to muster a genuine emotional drive. The audience gets to watch events unfold but you rarely feel like you're a part of the action are instead regulated to being an impartial observer. It's an earnest film that I feel needed to focus on just one part of the Leon Uris novel rather than trying to adapt the literary work in its entirety.

Through this expanse of time that 'Exodus' tries to encapsulate, it can feel like you're watching three separate films thinly strung together. The first film is about Ari's plot to free the Jews held on Cyprus by purchasing a boat and using forged military documents. The hunger strike on the Exodus and the political entanglement the British find themselves in is enough material for a single film. But then 'Exodus' moves to Palestine and the audience is treated to a social studies film about the Jewish and Arab history and how both peoples claim to hold the land. The second film is a political drama the climaxes with a prison break. Film three begins with the founding of the free Jewish state of Israel and the ramifications it has with its Arab Muslim neighbors. While Barak preaches peaceful coexistence, there are those who view peace as an impossibility and plan an attack on Jewish settlements throughout Israel.

Guiding the audience through the film, we have Paul Newman delivering a fantastic performance as Ari. He's unsympathetic and uncompromising with his mission, but when he meets an American outsider like Eva Marie Saint's Kitty, he's forced to call down and explain why the things that are happening are so important. In this way, Eva Marie Saint can feel a bit like an exposition dump for the audience to identify with, but at the same time through her we begin to understand and sympathize with the Jews' plight. One aspect of the film that I wish had been more fully explored is the relationship between Lee J. Cobb's Barak and David Opatoshu's Akiva. As brothers, they're bound by blood and religion but their ideological differences make them enemies. It's a fascinating dynamic, but the film keeps them separated for so long that their respective character's development is cut short. It's this Cain and Abel aspect that is fascinating but because this film is so focused on cramming in the entire novel into a single film that their material doesn't fully resonate as it should.

'Exodus' is a fine performance film, I loved watching the various actors and characters on screen, but I didn't necessarily love the movie they were in. As I mentioned before, the film feels as though it could have been three separate films and had turned out just fine. Adapting this novel couldn't have been an easy task for the legendary Dalton Trumbo, but he did a pretty incredible job considering the source material. It's when characters are allowed to be themselves and feel natural as human beings that Trumbo's script comes to life, it's when the story necessitates a political statement that much of the momentum 'Exodus' works so hard to build grinds to a halt. 'Exodus' is a fair film, but not an overwhelming accomplishment.

'Exodus' arrives on Blu-ray thanks to Twilight Time and is limited to a run of 3000 copies. Pressed onto a Region Free BD50 disc, the disc comes housed in a standard clear Blu-ray case. Also included is a booklet containing an essay by film historian Julie Kirgo. The disc opens directly to the film's main menu featuring standard navigation options.

Featuring a 2.34:1 (not it's original 2.20:1 aspect ratio presentation) 1080p transfer, 'Exodus' unfortunately shows its age - and it hasn't aged well I'm afraid. Originally filmed on Super Panavision 70, this transfer was apparently struck from the 35mm archival print that MGM had stashed away without undergoing any sort of meaningful restoration or remastering effort. To that end, detail is strong and film grain is apparent ensuring that DNR wasn't employed allowing you to appreciate fine facial features and production design work. Colors are bright and beautiful favoring warmer yellow and green earth tones while primaries have plenty of pop. While colors are nice and details look great, that's about all the "good" I can say. The source print used for this transfer is thoroughly unbefitting of a film of this stature. Scratches, debris, speckling nicks, and minor tears are all readily apparent throughout the entire run of the film. During day scenes, a number of these damage issues can hide a little, but whenever the film shifts to night scenes or darker locations, the damage is incredibly obvious and at times quite distracting.

'Exodus' comes with a smorgasbord of audio tracks to choose from. Apparently this is where all of the restoration for this film went because it comes packed with an English DTS-HD MA 5.1 track, a DTS-HD MA 4.0 track, and a DTS-HD MA 2.0 track. To put it in simple and easy terms, go with the 2.0 mix. While the 5.1 and 4.0 mixes do manage to add a sense of space to the film, these tracks have a tendency to sound a little hollow in places and the audible strength of the dialogue can come and go. That's where the 2.0 track is a bit of a saving grace. I started watching the film with the 5.1 mix, then as I started to miss more and more dialogue bits, I moved to the 4.0 track, and while that was an improvement, I still missed some important conversations. Thus, my recommendation of the 2.0 track. While the 2.0 track doesn't quite have the same sense of imaging or atmospheric space, you can hear the dialogue well and it also gives you plenty of opportunity to appreciate the Ernest Gold score.

Essay By Julie Kirgo: Another solid essay from Kirgo who offers a lot of backstory information about the film and its reception.

'Exodus' may have bitten off more than it could chew in just over three hours. With essentially three competing stories surrounding the formation of Israel, it can feel unfocused and loses some dramatic punch in the process. The presence of some great performances by Paul Newman, Eva Marie Saint, and Lee J. Cobb does make the film worth a watch. Twilight Time delivers the film onto Blu-ray, but is hampered by a less than ideal source print for the image transfer. The audio tracks are strong. Sadly, the disc doesn't offer much in the way of extra features, offering only an essay and the isolated score and effects audio track. Fans of the film should be happy with this release, others should consider a rental - especially if you haven't seen the film before.