The most savage killers lair in the west! George Montgomery (The Brasher Doubloon) stars as Jim Tex Wall, a rancher turned outlaw searching for three men who raped and killed his wife. Trailing the killers, he lands an honest job as a cowhand on the spread managed by the disabled Bull Herrick (Bruce Bennett, Sahara). When Bull s sister (Sylvia Findley) is kidnapped by a gang of outlaws, Tex seeing an opportunity to redeem himself; rides to her rescue. Veteran filmmaker Sidney Salkow (Twice-Told Tales) directs this gorgeously photographed western, featuring a stellar cast that includes the great Richard Boone (Big Jake), Peter Graves (TV s Mission: Impossible) and Warren Stevens (Forbidden Planet). Robbers Roost was the second version of the venerable Zane Grey (Western Union) yarn.

Westerns are a staple of Hollywood filmmaking. They were among the first feature films ever produced and were a cheap and easy way for a studio to make a buck. Like most movies, some westerns are good, some are bad. Because of their prevalence, there were a number of imitators and knock offs - especially in the B-Movie realm where story originality wasn't as big a concern as making sure that the studio had a slot to fill in their release slate. 1955's 'Robbers' Roost' directed by Sidney Salkow and starring George Montgomery, Sylvia Findley, Peter Graves, and Richard Boon isn't anything original, but it proves to be a good bit of entertainment.

For Tex Wall (George Montgomery), revenge is the name of the game. He's on a mission to murder the men who done him wrong, but in order to find the last man who raped and murdered his wife and stole his cattle, he has to join up with a cattle gang in order to get close enough to the man. That man is Hank Hays (Richard Boone). Hays and his band of cattle rustlers have been conscripted out for some honest labor herding cattle for the invalid "Bull" Herrick (Bruce Bennett) and his sister Helen (Sylvia Findley). After working his way into the gang, Tex learns that another cattle gang headed up by a crook named Heesman (Peter Graves) has also been hired to handle Bull's cattle. Bull's reasoning is two crooks should keep both men honest.

Little does Bull know that Hays and Heesman have formed an alliance to rip off Bull's cattle, a few heads at a time. When Tex learns that Hays has designs of his own for Helen, he does what he can to ensure that the young girl is safe. But with the law looking for Tex, and the fragile alliance between Hays and Heesman about to come undone as they aim to strip the entire herd, Tex is going to have to keep his wits about him and his pistol at the ready. 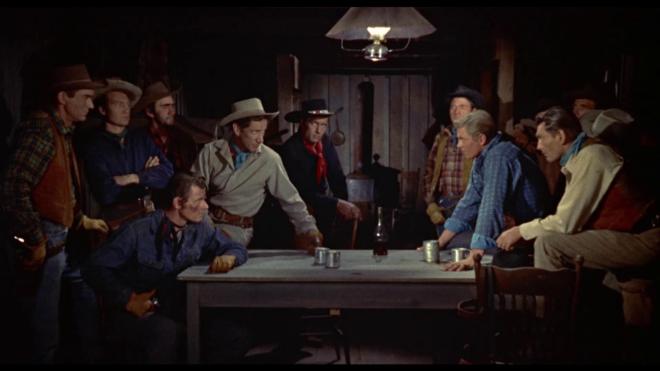 To call 'Robbers' Roost' a great movie or a highlight of the western genre would be a bit of a stretch. It's not that the movie is necessarily bad, it's just nothing amazing. Even with better than average production values, it's still a routine B-Movie that actually has more than a little passing resemblance to 1948's 'Last of the Wild Horses.' It doesn't help things that 'Last of the Wild Horses' was famously savaged by Mystery Science Theater 3000' in the shows 7th season.  Peter Graves' presence in the film didn't help stop my temptation to riff either.

All connections to MST3k aside, 'Robbers' Roost' was just entertaining. George Montgomery is a fine actor and has always maintained a strong presence that he brings in ample amounts to this film. Sylvia Findley does a solid job as Helen and is thankfully not cast into the dregs of being a persistent damsel in distress. Richard Boone fills his scenes with the right amount of smarmy and sleazy to be threatening - but not too threatening.

Part of what is working against this movie is the rather obvious capitulation to censorship. 'Robbers' Roost' is a movie that just feels gutted. It's not explicitly stated that Tex's wife was raped, but the implication is there enough times that they may have well just come out and said it. Hays and his men clearly have bad intentions for Helen, but they never say it, it's just left to implication. Without saying too much, there is a wholesome return to morals ending that just looks and sounds fake. Do these little oddities ruin the experience? Not entirely, they just suck a little wind out of the film's sails. Taken as a whole, the film is pretty good, it just has some story and plot simplicities that stand out compared to other entries in the western genre.

'Robber's Roost' arrives on Blu-ray thanks to Kino Lorber and their studio classics line and is pressed on a Region A locked BD25 disc. Housed in a standard Blu-ray case, the disc opens directly to the main menu.

For a film of this vintage and without any proper restoration effort, 'Robbers' Roost' features a pretty decent 1.85:1 1080p transfer. Decent, but not amazing. I'm actually allowing the film's age to give it a bit more credit that I would normally. The film's print is in fine shape with a little speckling and some tiny scratches. Film grain is strong throughout and leads to some okay detail levels, but there is a prevailing softness to the image that makes it actually feel like you're watching a movie that is being projected out of focus. Daylight scenes and some of the outdoor photography looks pretty fantastic most of the time, so that's at least something going for it. Colors are strong, but the film also looks a little too bright at times so things can appear a bit pale. As I said, it's not a terrible transfer, nor is it an amazing one.

"Murky" is probably the best way to describe the DTS-HD MA 2.0 audio track for 'Robbers' Roost.' While dialogue can be clearly heard throughout the film's runtime, that isn't to say that it's not without some issues. For starters, nothing feels lifelike, everything from the music to the sound effects to the dialogue has a canned "tinny" sound to it with a strange echo. When the score swells, it tends to overtake all of the audio of the track, so if there's any dialogue or a shootout or any kind of action, the whole track turns to soup. This audio track is at its best during quieter calmer scenes when only a couple of characters are on screen at the same time. When things get too crowded, that's when the trouble starts. Considering the age of the film, the only way this could sound any better is with a lot of restoration work, but considering the film, that's not likely to happen anytime soon.

As entertaining a film like 'Robbers' Roost' may be, it falls victim to the fact that there are so many other better westerns from the 1950s to enjoy. This is the kind of movie that if you were flipping channels and landed on TCM randomly, you would probably come away entertained. Kino Lorber has brought the film to Blu-ray and unfortunately, this is a case where age and the lack of restoration and remastering has shown up. The video is serviceable but the audio is a bit messy and the lack of extra features makes this one worth a rental only. I would be hard pressed to recommend this one on a blind buy and even then I would have reservations - but I can't entirely suggest folks skip it because the film itself is still pretty good.

Sale Price 14.99
List Price 29.95
Buy Now
3rd Party 10.99
In Stock.
See what people are saying about this story or others
See Comments in Forum
Previous Next
Pre-Orders
Tomorrow's latest releases