Strother Martin and Dirk Benedict star in this eerie tale of a respected snake expert who masks a frightening desire to transmute a man into a king cobra. Realizing that his new lab assistant, David (Benedict), is the perfect specimen, the demented doctor begins administering to him injections of "immunization serum." Soon, David begins experiencing strange side effects: his skin is shedding while his body shape is changing. But before he realizes the horrible truth, the metamorphosis from human to serpent has begun.

"Doctor, what is this? I feel like my guts are being rearranged!"

It's a great moment when you come across a movie that just knows what it is, doesn't try to be anything else, and just goes for broke. Some genre films try to be more than the sum of their parts and in the end fail to meet even the base level expectations the paying audience comes in with. 1973's 'Sssssss' directed by Bernard L. Kowalski, produced by the dynamic duo of Richard D. Zanuck and David Brown and starring a chilling Strother Martin is just that sort of genre fair. It's a film that knows what it is and goes for broke in order to creep out and unsettle an audience rather than bog itself down by expounding on a grandiose theme.

Man is on the brink of extinction. Or, rather that's what esteemed herpetologist Dr. Carl Stoner (Strother Martin) thinks of the world. As a university professor, Dr. Stoner spends less and less time teaching while pursuing his obsession with snake venom. Because snake venom kills most men, Dr. Stoner is convinced that it could actually be a bridge for man and their next evolutionary leap forward. After selling his previous test subject to an unscrupulous carnival barker (Tim O'Connor), Dr. Stoner needs a new assistant. While pleading for a grant extension with his sleazy department head boss Dr. Ken Daniels (Richard B. Shull), Dr. Stoner is assigned the astute David Blake (Dirk Benedict).

While David is eager to learn from the good doctor, Dr. Stoner is far more interested in giving the young student a series of "venom immunization" injections. Dr. Stoner's pretty young daughter Kristina (Heather Menzies) helps around the lab and she and David spark a bit of a romance, but their budding attraction is cut short when David starts to have bad reactions to the serum he's being injected with. Of course, these reactions are exactly as Dr. Stoner planned. As David slowly starts to change and his skin suddenly becomes scaly and green, his chances of survival dwindle by the minute. Everyone including the police, Dr. Daniels, the college bully Steve Randall (Reb Brown), and even Kristina are powerless to stop Dr. Stoner's evil plot. 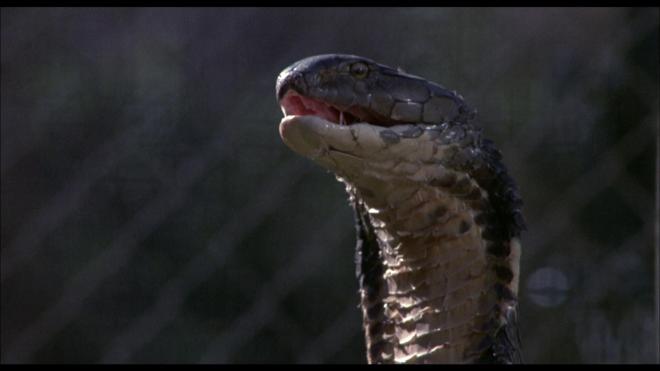 'Sssssss' or 'Hisssss' or 'Ssssnake' as it's also known as is a pretty goofy but wildly entertaining little 70s horror film. Of course, the story is completely absurd and in fact, a lot of the plot makes little sense, but the movie's strengths come from the commitment of the cast. Strother Martin is just downright unsettling. His Dr. Stoner is a man who believes what he is doing is right, no matter what happens to David or anyone who happens to get in his way. Dirk Benedict's David is a bit of a dope when you get right down to it, for a supposedly brilliant young student he's way too trusting - but then the movie wouldn't work if he asked too many of the right sort of questions. Also, fun in their respective roles is Tim O'Connor, Richard B. Shull and TV's 'Captain America' Reb "Big McLarge Huge" Brown as the school jock. It's a silly concept when you get right down to it, but the cast sells 'Sssssss' thought their efforts.

'Sssssss' isn't hell bent on showing gory works of practical effects makeup but is instead intent on unnerving the audience with its creepy story, least of all the numerous snakes! This movie opens with a wonderfully cheesy title card stating that virtually all of the snake footage on screen is real. And aside from one very obvious puppet, it would appear that this was a very hazardous set to work on for the cast and crew. I'm not one to get creeped out by snakes, but watching these things whip around and snap their tiny jaws on fingers, arms and one well-placed python squeeze a man to death was enough reptilian horror to make my skin crawl. Watching a man's foot slide down a snake's mouth pretty much put the kibosh on me ever owning a pet snake.

'Sssssss' isn't exactly what most people would call a work of art. But if you're in the mood for a piece of Drive-In quality entertainment, this little flick delivers. As you watch this movie, it isn't too much of a stretch to see how Richard D. Zanuck and David Brown would end up being the perfect production team to oversee 1975's 'Jaws' just two years later. These guys had the right sort of energy to make good looking genre pictures that were produced on modest budgets. If you're someone who can get behind the idea of a mad scientist turning a student into a man-snake, 'Sssssss' is a fun little throwback film to the cheesy 1950s B-movie sci-fi flicks of old. I had a blast with this one and it kept me engaged and entertained throughout its swift 99-minute run time.

'Sssssss' arrives on Blu-ray thanks to Scream Factory. Pressed onto a Region A locked BD50 disc, the disc is housed in a standard Blu-ray case. This set also features reversible artwork for the film's rerelease with the alternate title 'Sssssnake' promoting the fact that Richard D. Zanuck and David Brown also produced 'Jaws.'

Featuring a 1080p 1.85:1 image transfer, 'Sssssss' makes a pretty decent leap to Blu-ray. Fine film grain is clearly visible allowing for some strong detail levels to emerge. Colors are stable for the most part allowing for plenty of primary pop and some even flesh tones. There are a few scenes early on that would appear to have been sourced from a different print as the film grain is a bit heavier and the colors are a bit dull and washed out. Overall the print is in decent shape with only very mild speckling here and there. Thankfully that moment lasts all of a couple minutes. The rest of the film looks pretty fantastic. Black levels and shadow separation are strong allowing the film a strong sense of depth without any heavy crush issues. There is some very slight edge enhancement employed, I did spot a little banding in a couple places, but nothing so terrible as to knock too harshly for. For a little bit of extra fun, during the skinny dipping scene, some very obvious fake foliage is superimposed over the actors' naughty parts and this effect stands out like a sore thumb, but that's not a fault of the transfer so much as the filmmakers undoubtedly attempting to avoid an R rating.

'Sssssss' comes with a solid DTS-HD MA 2.0 audio mix. The track is clean of any hiss or pop or any other age related anomalies. Even for a stereo mix, the track demonstrates a nice sense of space and dimension through the ambients and background sound effects. The score by Patrick Williams does a great job of rounding out the mix and plays a nice subtle and somber notes and kicks in aggressively when the horror-fueled action takes place. Dialogue, for the most part, is clean and easy to hear but there are a few instances where Strother Martin tends to mumble his lines that can be difficult to hear. It's not a fault of the track so much as the actor not speaking clearly since the actors around him are clearly heard.

My Reptilian Past  with Dirk Benedict: (HD 17:39) This is a pretty fun interview with the actor about how he got cast and the production. He's very expressive and it's a lot of fun listing to him talk about the character and how dumb the guy actually is and how much fun he had working with Strother Martin.

The Herpetologists Daughter with Heather Menzies: (HD 15:09) The former 'The Sound of Music' actress talks about how she got cast, her fear of snakes, and how this film leads to a long career working on various Universal Pictures films.

Photo Gallery: (HD 3:40) you can advance through the images or just let them play out. I really want an original poster of this movie now, it's some pretty great marketing!

Theatrical Trailer: (HD 4:10) "Don't say it, Hiss It!" has to be one of the best catch phrases for some movie marketing ever - especially since the title is actually a sound and not a word.

Radio Spot: (1:29) I love old radio spots, I wish they still did this level of marketing for genre films.

'Sssssss' may not be the greatest horror/sci-fi film to grace the silver screen, but it's a heck of a great ride. This film has a simple plot that doesn't overextend itself, and it makes great use of some fun practical effects. I had a blast with it all the way through. Scream Factory brings 'Sssssss' to Blu-ray in fine order, with a solid A/V transfer as well as some pretty decent extra features material. 'Sssssss' may not be a movie that appeals to everyone, but if you're a fan of schlock genre filmmaking, absolutely consider this flick as recommended.

Sale Price 14.99
List Price 18.21
Buy Now
3rd Party 16.2
In Stock.
See what people are saying about this story or others
See Comments in Forum
Previous Next
Pre-Orders
Tomorrow's latest releases