The surprise sleeper hit of Cannes, the film depicts Woo-jin, who, every morning, wakes up in a different body. His age, gender, and nationality may change, but the one constant in his life is Yi-soo - the woman he loves. She knows his secret, and loves him anyway. With every transformation, Woo-jin has to figure out how to return to his own body and reunite with Yi-soo.

From the first scratches of language on stone tablets to epic poems to Shakespeare's sonnets, love has been a topic of the arts. Paintings, stories, songs, films have devoted countless numbers of hours attempting to make sense of one of the greatest mysteries of the human condition. It's partly because love isn't a quantifiable emotion and is instead a unique experience that makes it such a worthwhile topic of discussion. What is it that defines love? Is it appearance or is it something deeper within? 'Baik directs a Korean remake of 'The Beauty Inside' and explores the themes of love beyond surface beauty to the depths of what is inside a person that makes them attractive to someone else.

While the rest of the world goes about their daily lives, waking up, eating breakfast, going to work, coming home, eating dinner and going to bed, Woo-Jin has an entirely different routine than the rest of us. He does make sure to have a morning meal, take time from his job as a premier furniture designer to take a break, and even go out with his best friend Sang-baek (Dong-Hwi Lee) to some bars and maybe even pick up a lady for the evening. Although that may sound somewhat normal, for Woo-Jin his life is anything but normal.

Every morning after going to bed,  Woo-Jin wakes up looking like a completely different person. Man, Boy, Woman, Girl, Elderly, Woo-Jin wakes up to a different face, a different voice and sometimes even a different nationality and is unable to speak his native Korean language. As a result, a true and meaningful relationship eludes Woo-Jin. That is until he meets the beautiful E-soo (Hyo-ju Han). Every day he finds a reason to visit her furniture shop just to see her. When he can't bare it any longer, he finally asks her out - even if their date could only last one night. What was supposed to be just one night turns into an emotional odyssey as Woo-Jin confides in E-soo and tells her the truth. As every day turns and Woo-Jin changes appearance, the pair's relationship will be tested and strained.

There are a number of movies that have come out over the years that try to tackle the subject of inner beauty and how the love inside of a person is more important than what someone sees on the outside. While dozens of films have tried their hand at it, 'The Beauty Inside' is the first film, in my opinion, to hit the nail on the head. Sure, the idea of a literal change can be a bit on the nose in places, but this film goes beyond that simple convention and addresses one of the leading issues that faces anyone in a long-term relationship - love can change. As people change and grow over the years, that relationship and love that you share with someone else can change as well. It may grow stronger, weaken, strain, or even burst, forcing you and your loved one to change and grow as well. 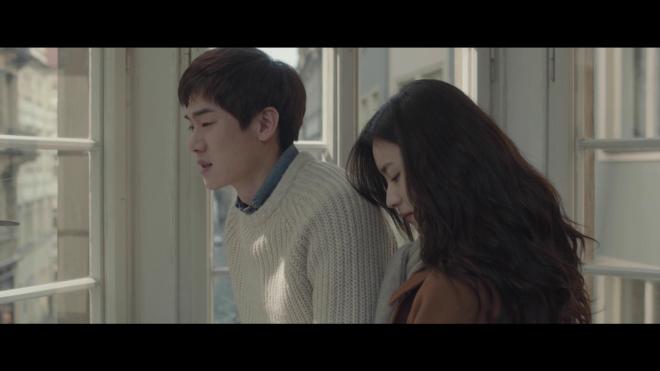 At the center of 'The Beauty Inside' is a series of amazing performances. While Hyo-ju Han as E-soo and Dong-Hwi Lee as Sang-baek are the film's primary constant actors, it's the over 120 performers who portrayed Woo-Jin that deserve a special mention. Chemistry is important for any love story and each actor who took on the role of Woo-Jin and worked to maintain a feeling of connection to E-soo. We follow much of this couple's relationship through Woo-Jin's eyes, hearing his thoughts as he wakes up a changed person day after day believing love is an impossibility. Narrated by Yeon-Seok Yoo, the audience is given a chance to hear as well as see someone change who they are from one moment to the next. Naturally we want the best for a character who believes love to be an impossibility but there is a reality to his situation that puts that possibility in danger.

I never saw the social film starring Topher Grace and Mary Elizabeth Winstead, so I have no real basis of comparison there. All I can do is speak to this version of 'The Beauty Inside' is as a singular experience, and say that I loved this film. My wife and I enjoyed every moment of the film. 'The Beauty Inside' is a movie that hits the emotional cores in a way that doesn't feel exploitive but instead a genuine exercise in understanding the conditions of unconditional love. Like with most stories and songs and works of art, 'The Beauty Inside' doesn't pretend to have the answers, but it's wonderful seeing under what strained conditions it can still thrive.

'The Beauty Inside' arrives on Blu-ray thanks to Well Go USA. Pressed onto a Region A locked BD25 disc. Housed in a standard Blu-ray case, the disc opens to the film's main menu.

'The Beauty Inside' is given a strong and detailed 2.39:1 1080p transfer. Shot digitally, the image retains a strong detailed presence throughout providing a fantastic look at fine facial features. This is especially important considering the number of actors involved in portraying the lead character. Colors are on the warmer golden-toned side of things but don't affect flesh tones or primaries too greatly. Primaries have their place but the film favors earth tones, especially because of the main character's love for handmade wood furniture. There is a bit of softness to the image at times, but that appears to be by intent as it fits the dreamlike tone and qualities of the film. Black levels are strong, crush is never an issue and the film has a strong sense of depth to the image. All around this is a very warm and comforting looking image and fits the tone of the film perfectly.

With a Korean DTS-HD MA 5.1 audio track with English subtitles, 'The Beauty Inside' earns strong marks. The film is of a quiet and contemplative nature. While it's not always serious, the sound effects work, score and final mix keep the film firmly rooted in the territory of a character drama. Dialogue keeps to the front/center channels allowing the sides and rears to fill each scene with necessary atmospherics. Since a number of sequences take place in large open space workshops and warehouses, there is a nice amount of directionality where voices and sounds have the right echo tone to give each room a sense of dimension. The track keeps to the mid-levels without any kicks to upper or lower registers and the levels are spot on.

I thoroughly enjoyed 'The Beauty Inside.' It felt like it had been a good long while since my wife and I had seen a genuinely good and compelling romance that didn't play the dramatics into predictable corners. It's become a new favorite for us and one we look forward to watching over and over again. Well Go USA has brought 'The Beauty Inside' to Blu-ray in fine fashion with a near flawless audio/visual presentation. Unfortunately, there aren't any extra features of note, but that isn't going to keep me from calling this disc recommended.

Sale Price 26.24
List Price 29.98
Buy Now
3rd Party 19.93
In Stock.
See what people are saying about this story or others
See Comments in Forum
Previous Next
Pre-Orders
Tomorrow's latest releases