In A Mighty Wind, director Christopher Guest reunites the team from Best in Show and Waiting for Guffman to tell the story (co-written by Eugene Levy) of '60s-era folk musicians, who, inspired by the death of their former manager, get back on the stage for one concert in New York City's Town Hall.

Levy and Catherine O'Hara are Mitch and Mickey, once the sweethearts of folk music until their bitter separation; Guest, Michael McKean and Harry Shearer are classic folk trio The Folksmen, and Parker Posey, John Michael Higgins and Jane Lynch anchor a color-coordinated, harmonizing "neuftet" - the New Main Street Singers.

"I'm sure it will be an adventure, a voyage on this magnificent vessel into uncharted waters. What if we see sailfish jumping and flying across the magnificent orb of a setting sun?"

I love a good documentary. Even before my wife turned me into a PBS 'American Experience' loving nut, I loved learning about things beyond the little nugget of the world I knew and experienced on a daily basis. It's just a lot of fun to see something, have your eyes opened wide to something new like that. However, as much as I love documentaries, I love mockumentaries even more! While it takes a lot of effort to create an unbiased honest documentary, it's infinitely harder to create a mockumentary where the filmmakers have to create a believable world, present it as fact instead of fiction, and then also make the audience laugh. Writer, director, and actor Christopher Guest could be dubbed the unofficial "king of mockumentaries" after starring in 'This is Spinal Tap,' he partnered with Eugene Levy to create the regional theater satire 'Waiting for Guffman,' and skewered dog shows with 'Best in Show.' In 2003 Guest and Levy brought their cast of improv sketch comics together one more time for the sweet yet hilarious send-up of folk music 'A Mighty Wind.'

Esteemed folk record producer Irving Steinbloom has died. He was responsible for bringing together the biggest and best folk groups of the 1960s and turning them into hit recording artists tapping into the culture of peace and freedom that was a part of the era. With many of these acts long disbanded and forgotten, Jonathan Steinbloom (Bob Balaban) and his siblings are trying to bring the groups back together to perform a memorial concert at Town Hall in New York City. As Jonathan quickly learns, reuniting all of these groups back together is going to be harder than expected.

Groups like The Folksmen with the skincare conscious Mark Shubb (Harry Shearer), the vibrato-heavy tenner Alan Barrows (Christopher Guest), and guitarist Jerry Palter (Michael McKean) are easy and eager to rejoin. As are The New Main Street Singers who have been reformed with new members like Terry and Laurie Bohner (John Michael Higgins and Jane Lynch respectively) and Sissy Knox (Parker Posey). But the real tough nut to crack will be getting the iconic lovebirds of the folk scene Mitch and Mickey (Eugene Levy and Catherine O'Hara respectively) back together again. As the bands reform, break out and tune the instruments and get ready for the big show, the pressure mounts for the acts to put on the best show they've ever performed when they learn it's going to be broadcast live on public television. 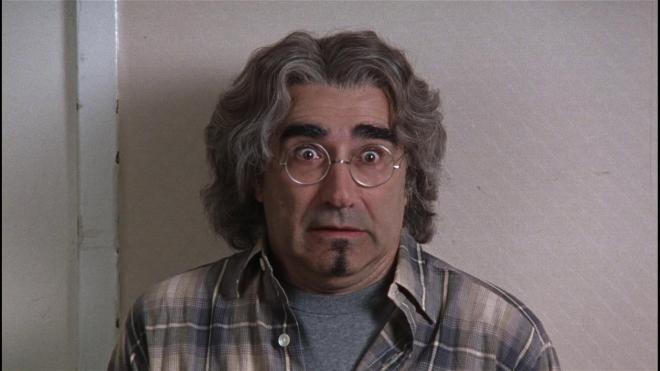 Like any great comedy, it's a blessing in disguise to have to write a review. On one one hand you desperately want to write down all of the funny bits and some great lines of dialogue, and on the other hand, you need to hold back and not give away the show because you want to encourage people to see the movie and still laugh when they see it. 'A Mighty Wind' is just that sort of movie. If you haven't jumped on board the Christopher Guest bandwagon, I would say 'A Mighty Wind' is perhaps the easiest to get acquainted with. The tone of the satire for 'A Mighty Wind' is more friendly and jovial. 'Waiting for Guffman' I've always felt was the darkest humor, and while I found it hilarious, I know others who didn't get into it. The best of the three was 'Best In Show' as virtually every joke sticks its landing and is a laugh a minute. 'A Mighty Wind' has plenty of big laughs but the film plays more as a satirical ode to its subject matter rather than an outright skewering.

Part of what makes any of the Christopher Guest directed mockumentaries so much fun is the stable of actors that he brings to each show. They're a group of committed and talented comedians who with or without a great script, are hilarious on their own. In these films, they're brought together with only a thin outline and are left to make up almost all of their dialogue, making 'A Mighty Wind' - especially all of the moments with Eugene Levy - a showcase of raw comedic talent. From straight-faced jokes of people telling their life stories to numerous visual puns, the film just makes you smile and then gives you more than enough belly laughs to make you want to keep watching it over and over again.

Where 'A Mighty Wind' holds a special place for me is because I have a few family members who were into folk music back in the 1960s. My Aunt, in particular, was a fun one to watch this movie within the theater because she knew all of the songs the various groups were referencing and could even sing the original lyrics! I'm not 100% sure if she really enjoyed the movie given its satirical edge, but at the same time, the jokes aren't exactly about making fun of Folk Music or folk groups in general. The jokes are funny because they're actually just making fun of people in general. We all have our unique peccadilloes and traits that under the right eye could be made into something of a comedy. Like most things in life you have to maintain something of a sense of humor and I've found that movies like 'Waiting for Guffman,' 'Best in Show,' and 'A Mighty Wind' are great reminders to stop for a moment and have a laugh at life. For this review alone I watched this movie, at least, three times and had already seen it dozens of times before. It's a movie that just stays funny through repeat viewings.

'A Mighty Wind' makes its Blu-ray debut thanks to Warner Archive. Pressed onto a Region Free BD50 disc, the disc is housed in a standard Blu-ray case and opens directly to a static image main menu with standard navigation options.

Given that it's a relatively late arrival for Blu-ray and it's 16mm film source, I wasn't expecting too much for this release but I was blown away. Maintaining the theatrical 1.85:1 theatrical aspect ratio, this 1080p presentation is leaps and bounds better than the previous DVD release. This is very clearly a recent scan as numerous amounts of dirt, speckling, and hairs are no longer apparent in the image. Film grain is apparent but isn't coursing through every scene as can be the case with some 16mm transfers. Facial features, costumes, and scenery details look fantastic and if you're a fan it's likely that you'll spot some background detail jokes you had missed previously! Colors are also a vast improvement, especially the bright blue sweater vests the members of The New Main Street Singers wear. Black levels don't quite approach true inky black, but there doesn't appear to be any contrast issues as the image has a nice sense of depth to it even though foreground and midrange object appear sharper and more detailed.

While it may be a very front/center heavy track, 'A Mighty Wind' is given a very strong DTS-HD MA 5.1 audio upgrade. Much like a documentary there isn't much need for a surround sound effect for a lot of the scenes, that said, it's this track's subtle audio effects that really stand out. From the tinkling sounds of the model train setup to the natural echoing of the performance hall, there is a noticeable fidelity improvement over the previous DVD release. There is just a better sense of space to each scene that helps the actor's dialogue as well as the music they play sound natural and resonant. While the track keeps to the mid ranges much of the time, it's the big concert event that kicks the upper and lower registers into gear without tearing apart the mix. Levels are also spot on so there's no need to monitor your volume. All around a fantastic audio mix.

Audio Commentary: Christopher Guest and Eugene Levy are a blast with this commentary track. It can be hard at times to tell if they're joking but this is often a hilarious track as the pair discuss everything from working with old friends again, as well as the Folksmen which proved to be a pseudo reunion of 'This is Spinal Tap.'

Additional Scenes: (SD 21:59) These are a mix of completely deleted moments with scene extensions that got cut for pacing with an optional commentary track.

TV Appearances: (SD 9:22) These are some great little extra side jokes that just didn't get worked into the film that showcased where some of the characters and their respective musical acts were featured in television shows throughout the 1960s either as featured acts or as cameo guest spots. An optional commentary track is also included.

Live TV Broadcast of the Concert: (SD 20:42) This is designed to look as it would have if you watched the show at home on your own television set. You also get to enjoy all of the songs each act plays as well as the big final number.

Extras: (SD 1:20) This is a pair of extra features that were hidden easter eggs on the previous DVD, now you don't have to hunt for them. An optional commentary track is also included.

Sound Spot: (SD 0:38) this is a brief bit of advertising by Harry Shearer done for "A Mighty Wind: The Album" soundtrack featuring the music heard in the film.

If you're a comedy fan who loves satire and enjoys deadpan improv humor with a little bite, 'A Mighty Wind' is the movie you should keep on your radar. If you haven't seen 'Best in Show' yet I'd also strongly suggest you hunt that one down and add it to your Blu-ray queue. Hopefully, soon we'll be getting 'Waiting for Guffman' on Blu-ray because all three films deserve the full HD treatment. 'A Mighty Wind' is a fantastic comedy and it's easy to watch over and over again without ever getting bored. Warner Archive has brought this fantastic film to Blu-ray in great order with a spectacular Image presentation and a dynamic audio track to match. All of the previous extra features were ported over giving you hours of funny extra material to get through! This Blu-ray of 'A Mighty Wind' is highly recommended.

Sale Price 17.99
Buy Now
3rd Party 18.21
In Stock.
See what people are saying about this story or others
See Comments in Forum
Previous Next
Pre-Orders
Tomorrow's latest releases