On Halloween, 1962, ten year old Frankie Scarletti's classmates lock him in the coffin-like confines of his fourth grade cloakroom where he is forced to spend the night unbeknownst to anyone....alive. When the darkness comes, Frankie is horrified to discover the ghost of a little girl murdered in the very same room ten years earlier. How he comes to solve the mystery of who killed her and bring her to final peace, makes for a terrifying and heartwarming journey into the realm of human experience.

Coming from an immigrant family with typical aspirations for the ever-elusive "American Dream," my imagination was immediately captivated by 'Lady in White' when it originally released in 1988. It has since remained with me primarily because writer and director Frank LaLoggia shows the Scarlatti family as the classically conventional all-American family living in the idyllic, all-American small town. Grandma is the distinctive matriarch always annoyed with everyone's immature behavior while crankily grilling grandpa about his cigarette smoking. After overcoming the sad loss of his wife, widowed dad is filled with loving smiles, raising two happy-go-lucky boys and running a successful small business from his barn. The rural town is that quaint well-worn place where everyone knows each other on a first name basis, the sort that only exists in fantasies and movies. Photographed with a dreamlike haze by Russell Carpenter ('True Lies,' 'Titanic,' 'Ant-Man'), the lively humor and welcoming feel of this charmingly peaceful corner of Americana is brilliantly revealed to us via a friendly bicycle race between brothers.

However, LaLoggia patiently and methodically reveals this seemingly unspoiled, picturesque utopia is not without its share of evil lurking so deep beneath its façade of innocence as to go unnoticed. Or perhaps, intentionally ignored. He cleverly exposes this truth in small doses, starting with Frankie (Lukas Haas) sharing his harmless Halloween story. As he tells about a monster ravaging the streets of London, the talented, bit fragile-looking boy keeps his fourth grade class clinging to his every cutely dramatic word. Granted, the dark imagination of a child doesn't mean much, but it's the start of tiny steps progressing towards a darker subject matter. After school, fellow classmates and bullies Donald (Jared Rushton) and Louie (Gregory Levinson) decide to play a cruel prank on Frankie by locking him in the school's cloakroom. Another taste of wickedness suppressed in even the most innocent of places. And this is where LaLoggia finally exposes what's at the heart of the plot, slowly turning the screw as Frankie is made witness to the horrifying murder of a little red-haired girl while also learning the murderer still remains unpunished. 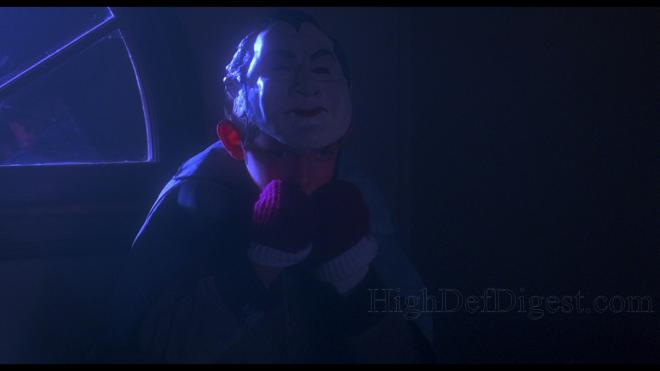 After miraculously surviving a brutal attack at the hands of the unknown killer, Frankie wakes — both literally and metaphorically — to discover much has happened during his recovery. Everyone crowds his room, from Dad (Alex Rocco) happy to see his son talking and grandma still bickering at grandpa to close family friend Phil (Len Cariou) wishing him well and brother Geno (Jason Presson) updating him on the news of his little brother's celebrity status. It's a warm-hearted scene showing Frankie doesn't have to face the tragedy alone while suggesting he now sees the world with new eyes. He discovers the killer already claimed the lives of eleven other children in the last ten years. Without missing a beat and keeping us engaged at every turn, LaLoggia smoothly shifts from family supernatural film to a mystery thriller that kids can follow, a fairly common theme of the decade with Frankie and Geno growing into astute super sleuths. Meanwhile, a subplot involving the school janitor (Henry Harris) being incriminated for the murders adds another dark layer to the proceedings, one obviously of the heated social issues of the era.

Admittedly, LaLoggia's stress on the period's immoral view on race relations can, at times, feel a bit heavy-handed. Frankie overhears a conversation between his father and the sheriff (Tom Bower) about the janitor being the perfect patsy due to the color of his skin. Earlier, the mother of one of the murdered children interrupts a church service with a speech lamenting her loss and pointing fingers at parishioners in the back row. It's a scene meant for wrenching hearts, but might cause eyes to roll instead. And yet, such sequences work reasonably well for an overall effect. As we inch ever closer to solving the mystery and Frankie gains a broader understand of society's darker impulses, the audience is made to confront these troubling and disturbing truths of humanity. What makes 'Lady in White' so effective is its sense of familiarity before unveiling the wickedness residing within. LaLoggia eases us into a comfortable state with a wholesome, fantasy view of domestic ordinariness where evil doesn't exist. But grotesque monsters and malicious supernatural beings are not what we should fear most. Evil is the harmful things we do to one another, a prevailing reality that materializes in even the most innocent of all-American towns.

Shout! Factory brings 'Lady in White' to Blu-ray as a two-disc Collector's Edition package under the distributor's Scream Factory line. The two Region A locked, BD50 discs are housed inside a normal blue case on opposing panels with brand new reversible cover art.

The first disc contains the preferred 117-minute Director's Cut of the film along with a nice collection of bonus features. The second disc comes with the original 113-minute theatrical version and a new Extended Director's Cut, which runs 126 minutes. The difference between them is mostly small changes, added dialogue and music, and a couple new conversations, such as Sydney Lassick making an appearance as the mailman.

At startup, both discs go to a generic main menu selection on the left side with music and full-motion clips.

The lady in white materializes on Blu-ray with a great-looking 1080p/AVC MPEG-4 encode that offers a significant improvement over previous home video editions. According to a white-text intertitle at the start of the extended director's cut, the presentation was made from a brand new remaster of the interpositive. But in the case of the 126-minute version, the additional extended scenes were taken from the best available release print, so several instances of dirt, minor scratches and lower resolution quality are to be expected. During those same sequences, the natural grain is also bit more pronounced.

Thankfully, none of these moments are egregious enough to ruin the overall quality and enjoyment of the encode. With a nice, film-like layer of grain washing over the picture, the 1.85:1 image shows a great deal of definition and clarity. Fine lines along furniture, clothing and hair are sharp while the smallest object in the quaint Scarlatti house made plainly visible in the distance. Every blade of grass, leaves and the bark of trees are very well-defined and distinct. Of course, as mentioned above, the presentation is not without its share of soft spots, many of which take place during nighttime sequences.

On the other hand, the high-def video also displays great contrast and brightness balance, showing lots of clean, crisp whites throughout and maintaining a lovely, comfortably bright picture. Black levels are true and accurate while shadow details remain clear and visible. The palette benefits most from the jump to HD, showing a beautiful, lush array of colors and richly-saturated primaries. The presentation may not blow away some viewers, but it's a welcomed upgrade nonetheless.

The scares continue with an excellent pair of DTS-HD Master Audio soundtracks, as is customary of most Scream Factory releases. Interestingly, both tracks are quite similar, and either choice is sure to please fans. Nevertheless, I did find myself preferring and giving the slight edge to the stereo design over the new surround sound mix.

A majority of the action is maintaining within the front soundstage, as it should, generating a wide and welcoming presence with appreciably warmth and fidelity. Imaging is clean and detailed with clean distinction between the various ranges. However, the lossless mix is not particularly dynamic, making a couple scattered scenes here and there feeling a bit dry and flat. Thankfully, Frank LaLoggia's score exhibits plenty of detailing and keeps viewers amusingly immersed when spreading across the screen and lightly bleeding into the sides. Also, low bass is appropriately palpable and hearty. In its 5.1 alternative, the few bits of ambient effects are used well and discretely without also feeling forced or artificial.

Other than hearing a bit more activity in the surround speakers, the most noticeable difference is that the new upmix appears louder than its stereo counterpart. This sadly affects the dialogue during several key moments, most notably every time the narrator commented on the action. While in stereo, I had to turn up the volume by at least three decibels in order to clearly hear what grown-up Frank wanted to say, and in the 5.1 version, the actor's voice was pretty overwhelmed by other noises in the background and couldn't really hear him at all.

Aside from that, however, fans are provided with a nice pair of lossless soundtracks.

When it originally released in 1988, Frank LaLoggia's 'Lady in White' immediately captured my imagination, showing the Scarlatti family as the classically conventional all-American family living in the idyllic, all-American small town. It's a cleverly ingenious way of easing audiences into a state of comfortableness and familiarity before unveiling the wickedness residing within even the most innocent and wholesome of neighborhoods. The Blu-ray arrives with an improved audio and video presentation that's sure to please fans ready to upgrade. Along with many of the same special features seen on the DVD, the overall package is recommended for cult enthusiasts who'll proudly display this criminally underrated family horror classic.

Sale Price 103.99
Buy Now
3rd Party 75.25
In Stock.
See what people are saying about this story or others
See Comments in Forum
Previous Next
Pre-Orders
Tomorrow's latest releases