Not long into 'Martyrs (2015),' a remake of Pascal Laugier's far-superior 2008 gore shocker, the low-budget flick brings into question the necessity of its existence. And not in some deliberately creative, self-aware approach that would've proven far more interesting than what we're actually given. But it begs that ever important question of pretty much all remakes. What's the point of redoing a movie, particularly when retrofitting a foreign film for American sensibilities — or should I say, fragile tastes — when the end result is little more than a rehash of the original? Sans the visceral, gut-wrenching visuals and the impact of the plot's philosophical ponderings, which are integral to the original's continued cult fascination. I highly doubt this production will ever be remembered as anything more than a failed attempt because it offers little difference to its predecessor and brings nothing of value to the subject matter. It's twelve minutes shorter and nowhere near as brutally gory or intelligent as Laugier's film.

In the movie's defense, the Goetz brothers, whose 'Scenic Route' was a pleasant surprise in 2013, made just enough changes for this to be a tolerable watch for those unfamiliar with the original French film. However, the minor changes are not sufficient for dodging accusations of being a pointless rehash, which ultimately warrants a recommendation for seeking Laugier's more stylized and skilled production while ignoring this one altogether. In fact, the filmmakers follow Laugier's story almost beat for beat, despite this adaptation being penned by 'Vacancy' and 'The Revenant' scribe Mark L. Smith, which is rather surprising. It opens with ten-year-old Lucie escaping unknown captors after years of abuse and later building a close relationship with Anna at a children's orphanage. Eventually, the two girls grow into Troian Bellisario of 'Pretty Little Liars' fame and Bailey Noble living drastically different lives. Bellisario's Lucie is understandably a damaged wreck while Noble's Anna is a college student. 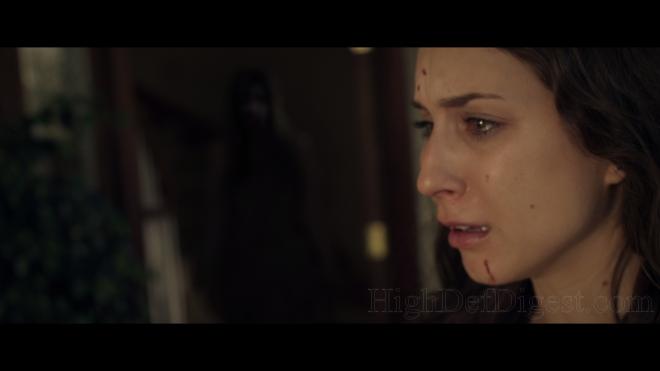 Immediately following a scene of Lucie killing a suburban family with a shotgun and Anna helping cover her childhood friend's mess, the Goetz brothers make us question Lucie's sanity. The years of abuse she endured as a child have left her permanently broken, believing she's tormented by a demonic-looking woman that violently beats her while convinced she'd found the family responsible for her mental state. Of course, this is assuming the sibling filmmakers' intended for their audience to contemplate, and if it is, it's done splendidly. However, the second half dismantles all this by shifting gears into revenge mode where Anna turns the table on her and her friend's new captors, a bizarre super-secret society searching for the truth about the afterlife and led by a chillingly indifferent Kate Burton. Granted, it still doesn't stray far from the original in respect to the group's inexplicable aims, but changing Anna into some mad-driven heroine for no other purpose than to see an empowered female character is a confusing waste.

Ultimately, the failure behind 'Martyrs' is that it never achieves some sense of purpose or ideas for the audience to ruminate upon, much like Laugier was able to accomplish while shocking viewers with sadistic, unflinching depictions of what the young women suffered. The gore served a larger purpose. Here, the filmmakers hold back except for one scene that implies one of the victims being flayed, leaving us to wonder its importance when the end goal is never shown. Not that it's actually necessary to see the aftermath, but to at least give the character's unimaginable pain some justification, as it relates to the group's demented motives. The Goetz brothers clearly believe they're saying something having to do with the infliction of pain opening pathways to a deeper awareness, or some such other according to the philosophies spouted by Burton's character. And it's all expressed through a heavy dose of religious imagery, which may or may not be a hint of clever forethought. But all they've demonstrated is that anyone suffering through this drearily derivative mess should be given martyrdom.

Anchor Bay Entertainment brings 'Martyrs (2015)' to Blu-ray on a Region A locked, BD25 disc housed inside a blue, eco-cutout case. After a couple skippable trailers, viewers are taken to the standard menu window with full-motion clips and music playing in the background.

Taking out its demented vengeance on Blu-ray, the horror remake debuts with an excellent 1080p/AVC MPEG-4 encode. Shot entirely on HD cameras, the freshly-minted transfer comes with the usually unattractive digital and sterile appearance lacking texture and character. Nevertheless, the photography of Sean O'Dea shows plenty of style and flair to make it a nice watch, even if the movie itself is a disappointment.

Contrast is comfortably bright with elegant, brilliant whites throughout, allowing for outstanding visibility of the tiniest objects furnishing the house and the twisted torture rooms in the basement. The fine lines in the clothing and surrounding foliage are detailed while the steel walls of the aforementioned basement expose the smallest blemish, and facial complexions are highly revealing. On the whole, black levels are true and rich with good shadow delineation, providing the 2.35:1 image with a great deal of dimensionality. However, a few sequences with intentionally poor lighting come with limited visibility, and in other parts, shadows are a bit murky and flat. Colors are accurately rendered with primaries, in particular, looking nicely saturated and bold, keeping things lively and energetic.

A couple minor issues worth noting, holding the high-def presentation from scoring higher, are various instances of aliasing along the edges of metal objects. There is also some near-negligible banding in a couple scenes and highlights tend to bloom in daylight exteriors.

The victims strike back with an excellent and highly-enjoyable Dolby TrueHD soundtrack that places more attention on subtly immersing the viewer into this world of suffering and sadness. During its brisk runtime, the film remains a front-heavy presentation with outstanding balance and panning across the screen, creating a terrifically engaging and broad soundstage. The mid-range exhibits superb clarity and separation in the loudest moments, and low bass provides the lossless mix with a palpable, weighty presence with a couple powerful moments that resonate throughout the room. Vocals remain distinct and precise in the center from beginning to end.

The rest of the movie is littered with small, understated atmospherics in the surrounds, nicely expanding the soundfield, but there are just as many moments of silence. But Evan Goldman's score is ultimately where the high-rez track truly shines, spreading across all three front channels while simultaneously bleeding into the sides, keeping the listener invested. Like the video, the remake is nothing remarkable, but the lossless design makes for a great listen.

From the Goetz brothers, 'Martyrs (2015)' is an American retelling of Pascal Laugier's far-superior 2008 gore shocker, minus the visceral, gut-wrenching visuals and the impact of the plot's philosophical ponderings. Granted, making comparisons serves little purpose, but when the filmmakers make a complete rehash of the original, it demonstrates the movie also has no purpose. The Blu-ray, on the other hand, arrives with an excellent audio and video presentation, but the lack of worthwhile supplements makes the overall package a rental at best.

Sale Price 21.49
List Price 22.99
Buy Now
3rd Party 17.98
In Stock.
See what people are saying about this story or others
See Comments in Forum
Previous Next
Pre-Orders
Tomorrow's latest releases