The west un-holsters its most savage story! Western legend Joel McCrea (The Gunfight at Dodge City) gives a compelling performance as a possibly mad cavalry commander seeking revenge for the death of his wife and kids at the hands of Apaches even if it means risking the lives of his regiment by taking them to a restricted territory. The enlisted men, especially a rebellious private (Forrest Tucker, Barquero) question his leadership and even his morality, but they know that they must stick together if the have any chance of surviving the dangerous Apache lands. Cult director Joseph M. Newman (Dangerous Crossing) directs this roaring cinemascope adventure featuring strong performances by John Russell (Rio Bravo), Susan Cabot (The Wasp Woman), Anthony Caruso (Baby Face Nelson) and Denver Pyle (Welcome to L.A.).

"If he needs our help to make it upstairs, he's in worse shape than he looks."

When you find a decent western, it's a good day for movie watching. There's something about a western that makes a complicated story or theme easy to digest and enjoy. Movies like 'The Searchers' balance the ideas of revenge and justice against the backdrop of a wild frontier. There is a romanticism to this sort of movie that when handled well, it's easy to allow yourself to be swept away until the film's final reel comes to a close. 1958's 'Fort Massacre' directed by Joseph M. Newman and starring Joel McCrea, John Russell, and Forrest Tucker tells a simple story well enough to be entertaining, but some late in the game morals temp down what is otherwise a tense thriller of a western.

C. Troop has just been decimated by an Apache attack. Having lost over 50% of their number including their commanding officer, the band of cavalry soldiers are left to turn to their last non-commissioned officer, Sargent Vinson (Joel McCrea) for leadership - only they're not quite sure what to make of the soldier. His history is a bit of a mystery. Some men believe he's a straight shooter of an officer and holds their best interests at heart. Others in the company have heard rumors that Vinson's family was killed by the Apache and the man is out for blood. Outnumbered with few rations to sustain them, the troops only hope is to make it back to Fort Crain - over 100 miles away. In order to make it back, Vinson and his soldiers and their horses are going to need water.

When they discover the watering hole they're headed to is currently being occupied by a band of Apache braves, Vinson orders a strategic attack. Their only hope for survival is to secure that water - even if it means losing their lives in the process. While the attack was a success, more men from C. Troop ended up buried for their troubles. While the remnants of the troop were able to get their water, men like Pvt. Robert Travis (John Russell) and Pvt. McGurney (Forrest Tucker) start to question Vinson's thinking. Travis is able to empathize with his commanding officer and Vinson offers up some explanations for his actions - but it still leaves the private feeling a little raw.

When C. Troop learns that their backup column has been massacred and that an Apache war party is hot on their trail, their best hope for survival is an abandoned cliff dwelling. Some men want to scatter and make a run for it while others side with Vinson that their best chance for survival is the fortified dwelling. With ammunition running low and the will of the men in shambles, Travis, along with the rest of C. Troop will quickly learn the true mettle of Sargent Vinson. Is he a man of honor and duty whose only goal is to ensure the lives of his men? Or is he a broken man driven insane by his desires for vengeance? 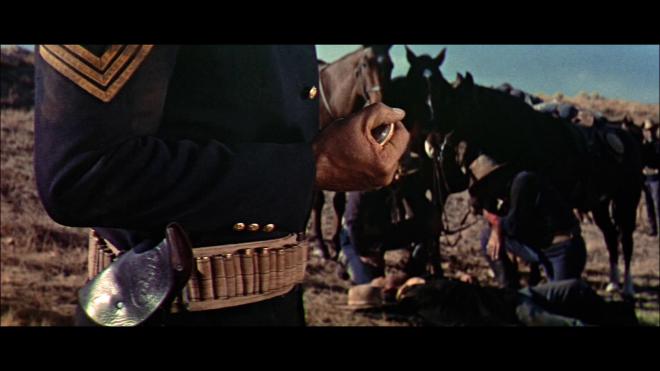 At a scant 80 minutes, 'Fort Massacre' is a swift and entertaining action-packed western. Bullets fly fast and furious and the film's tension level rarely abates for very long. That said, the film tries to tack in a little too much heavy-handed character motivations and moralizing for its own good. This isn't to say that the film shouldn't have tried this approach to give the story a little more weight, it's just that by the time the film reaches the third conversation between Travis and Vinson about the motives of the Sargent's decision-making, the moralizing gets to be a bit redundant. The trouble with 'Fort Massacre' is that in the time allotted for this story, it really only could be either a straight action western or a quiet moralizing film - but not both. Maybe an extra 15 or 20 minutes could have helped bring out the morals and themes in question a little cleaner because at the swift pace this film runs at, there isn't enough time to stop the show and think about it - especially when actions speak louder than words.

All in all, 'Fort Massacre' is a solid entry in the western genre. It keeps to the genre basics and its central characters play to specific archetypes. Joel McCrea does a fine job in the lead as Sgt. Vinson. For much of the film, it's guess work to determine the man's mental condition and reasoning and McCrea brought the conflicting nature of Vinson to the screen. One moment you feel for him, the next you're glad you don't know the man personally. To that effect, his counterweight in the film is John Russell as Pvt. Travis. Russell has always been a favorite of mine in the genre as he brings a strong presence to every role; from his turn in 'Rio Bravo' to his chilling performance in 'Pale Rider.' He's a great actor and holds his own against the commanding McCrea. Forrest Tucker also delivers a fun performance as well. For a B-Movie western that is given the full grandeur of an A-Film with sweeping desert vistas punched with some exciting action sequences, 'Fort Massacre' turns out to be a solid little flick that is absolutely worth a watch.

'Fort Massacre' makes its Blu-ray debut thanks to Kino Lorber and their Studio Classics line. Pressed onto a Region A Locked BD25 disc and housed in a standard case, the disc opens directly to the film's main menu.

This 2.35:1 1080p transfer for 'Fort Massacre' showcases the best and worst aspects of the CinemaScope shooting process. While the beautiful establishing shots of the desert scenery can look pretty good with a lot of clear details, close-ups and middle shots tend to look a bit blurry and lose a lot of details and becomes smeary around the edges. Film grain is present throughout so this transfer wasn't hit with any notable DNR or smoothing program, but the lack of finer details as well as some color issues highlight the fact that this film hasn't undergone any sort of thorough restoration. On top of the shifting detail levels, colors can be a bit inaccurate from shot to shot. One moment they can be bright and beautiful, the next they can appear drab and muted. Black levels also suffer throughout as blacks are never truly inky appearing and the image can appear very flat at times while other shots offer up a pleasing amount of depth to the image. There also appears to be some edge enhancement as the image can look sharpened and crunchy. Some haloing and banding crop up every now and again as well. Considering this is a back catalog CinemaScope film that hasn't undergone any sort of earnest restoration, I guess I should be happy it looks as good as it does. But considering that the film itself is pretty entertaining and worth watching, it's a shame the image quality isn't better than it is. It's still pretty decent looking, but I wish it looked better - especially when you consider the beautiful scenery.

'Fort Massacre' arrives with a strong and present DTS-HD 2.0 audio track. Dialogue is clean and easy to hear at all times. Sound effects sound natural and don't carry any sort of tinny or canned hollowness to them. All of the elements have plenty of space and the track features plenty of atmosphere allowing the audio to have a natural quality to it. For the most part, this film keeps to the midranges letting the dialogue and music do the heavy lifting. When the action sequences kick in, the track springs to life as gunshots have a nice thunderous presence to them and the screams of pain and the galloping horses all sound realistic and provide for some decent channel movement. The track does have a little bit of hiss in a few scenes, but nothing so terrible as to knock the score for very seriously. All around this is a great audio track that serves the nature of the film perfectly.

'Fort Massacre' is an all around decent action/adventure western. It offers up some great shoot-outs, a few decent bits of character development and maintains an entertaining level of tension throughout the film. It's not a great western, but it is pretty darn good, and fans of the genre should have a good time with this one. Kino Lorber has brought this film to Blu-ray with a serviceable image transfer and a strong audio track. The only extra features are a collection of trailers. Worth a look.

Sale Price 22.99
List Price 29.95
Buy Now
3rd Party 22.71
In Stock.
See what people are saying about this story or others
See Comments in Forum
Previous Next
Pre-Orders
Tomorrow's latest releases