Chuck Norris (An Eye For An Eye) is in peak form in this explosive action/adventure that brings back one of his most unforgettable characters, Delta Force Colonel Scott McCoy, for a daring mission to destroy a deadly South American drug cartel. When notorious drug lord Ramon Cota (Billy Drago, Hero and the Terror) captures a team of American narcotics agents - as well as a member of McCoy's elite Delta Force commando unit - and imprisons them in his remote San Carlos compound, The Delta Force charges into action, waging war against Cota's powerful cocaine empire. Against all odds, McCoy and his squad must fight their way to a blistering final battle to free the hostages and destroy the ruthless criminal mastermind in this lightning-paced and outrageously exciting turbo-charged adventure! Chuck s brother, Aaron Norris (Platoon Leader) directed the sequel to the smash hit... featuring strong performances by John P. Ryan (Avenging Force), Richard Jaeckel (Grizzly) and Mark Margolis (The Rosary Murders).

"I didn't fight. I gave a motivational seminar."

There is a legend of a man, a powerful human being of incredible physical ability who was born by bursting through the chest of a Xenomorph. A man whose stare could turn Medusa to stone. A man who once got into a bar fight and the bar lost. This man is 80s action icon, Chuck Norris. Throughout the 80s, Chuck Norris was one of the best go-to guys for off the wall action and adventure movies. Sure, his films never reached the height of Stallone or Schwarzenegger, but he held his own in that fight. His two big franchises were the amazing 'Missing in Action' and 'Delta Force' films. While each entry offered its own source of fun, the quality was here or there. While 'The Delta Force' co-starring genuine tough guy Lee Marvin had a decidedly lacking amount of Chuck, 'Delta Force 2' rights that wrong and pits our kicking hero with a beard against an evil Columbian drug cartel leader.

life was supposed to be getting a whole lot easier for Col. Scott McCoy (Chuck Norris). Sure he goes on the occasional mission when his commanding officer General Taylor (John P. Ryan) gives him a cal, but quiet is the quest McCoy is on. McCoy's best friend and partner in Delta Force Maj. Bobby Chavez (Paul Perri) has already gotten a head start and settled down, gotten married, and is about to have a kid. Plans for peace and quiet for McCoy and Bobby go down the tubes when the sadistic cartel boss Ramon Cota (Billy Drago) murders a team of DEA agents that were working for head DEA operative in Columbia by the name of John Page (Richard Jaekel).

At first, McCoy and Bobby are tasked with finding Cota and communicating with the DEA's inside guy that he needs to get out or risk being executed. But when they learn they can capture Cota themselves, the pair stage a mid-flight extradition parachuting the murderous cartel boss into U.S.A. hands. When, through a miscarriage of justice, Cota is allowed to go free on bail - Bobby's family is targeted. After his wife and unborn child are murdered, Bobby goes down to Columbia on his own for revenge. When the operation goes awry, Agent Page and his men are kidnapped and Bobby is tossed into a gas chamber. Cota makes a big mistake by videotaping Bobby's death and sending the tape to McCoy. With the backing of Delta Force, McCoy will be able to send Cota to hell, personally. 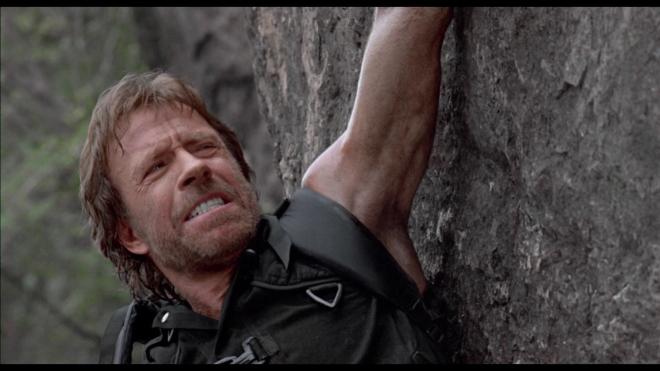 The fun of 80s action movies featuring the likes of Schwarzenegger, Stallone, or the high-kicking Chuck Norris was the idea of the "one-man army." From the Soviet Union to Latin American dictators to the war on drugs - these three guys could solve all of America's problems with their fists and a few well-aimed bullets. Movies like 'Rambo III,' 'Commando,' and Norris' 'Delta Force' and 'Missing in Action' franchises were jingoistic fantasy films. These are the kinds of movies that take the stand that talk is cheap and that the only way to get things done is by applying the right amount of pressure from the might of the American military. One could debate the politics of these films endlessly but to be honest, that would just spoil the fun. 'Delta Force 2' is a movie that should not in any way be thought about if you're going to have fun with it.

Where Chuck Norris fans may have been left feeling a bit bored by the lack of Chuck Norris in 'The Delta Force,' 'Delta Force 2' fixes that issue quickly. Chuck Norris is one hundred percent the lead man of this outing and this sequel proves to be a lot of fun with the golden beard in the lead. One thing I've long loved about Chuck Norris movies is how his character never actually "wants to fight" and will state as much in any number of ways, but you know inside of five seconds there's going to be a big fight. The action this time around comes a lot faster, there are a lot more bullets, tons more explosions, and a lot more flailing fists and feet of fury to be enjoyed.

What is also helping this movie work is the fact that it has a stronger villain in Ramon Cota played by the always hammy Billy Drago. Drago's schtick of over-enunciating and overacting can bring a movie down sometimes, but here, it fits like a glove. The guy has always played evil well and here he doesn't hold anything back. His sleaziness is the perfect counterweight to Norris's stiff and stern presence. Then you add in John P. Ryan as Gen. Taylor and you've got one heck of a cast of actors playing up their various strengths to a height that almost reaches comedic levels.

While 'Delta Force' isn't quite the deliriously campy action-fest that is 'Invasion U.S.A.,' It still manages to bring a lot of fun to the screen. Chuck Norris' director brother Aaron looks a little more at home with this film being able to stage some halfway decent character moments as well as some exciting action sequences. If you've never seen a Chuck Norris movie (is that even possible?), 'Delta Force 2' is a great way to introduce yourself to the actor. Fans of the man who would headline 'Walker Texas Ranger' should be more than happy with this movie. Be sure to grab some friends, pop plenty of popcorn, and make sure you have a well-stocked consignment of beer chilling in the fridge. 'Delta Force 2' is a movie designed to entertain an audience and it delivers the goods.

'Delta Force 2' A.K.A. 'Delta Force 2: The Columbian Connection' makes it's Blu-ray debut thanks to Kino Lorber and their Studio Classic's line. Pressed onto a Region A locked BD25 disc, the disc is housed in a standard Blu-ray case and opens directly to the film's main menu.

Considering the look and appearance of 'The Delta Force' on Blu-ray, I was a tad worried about the output for the 1080p 1.85:1 transfer for 'Delta Force 2.' Thankfully, this film's transfer is a vast improvement over the previous film's Blu-ray release. Film grain has been retained allowing for a stronger amount of detail to creep into the image. Colors are lot richer letting primaries have plenty of pop without having any kind of detrimental effect on flesh tones. Black levels are pretty strong with only an occasional contrast bloom here and there to keep blacks from looking inky during night shots, but there is still a notable sense of three-dimensional depth to the image. Where this transfer loses some ground is with the condition of the print, as well as some noticeable use of edge enhancement. While haloing or banding isn't too egregious, they pop up from time to time, and edges look very crunchy in some places. Not the worst I've ever seen for a back catalog title from the late 80s. The print this transfer was sourced from also exhibits a fair amount of wear and tear in the form of speckling, scratches, and even some hairs that fly up the screen every now and again. While some may dislike that look, in my opinion, the print condition actually works to add some extra charm to the rest of the movie.

Sporting an English DTS-HD MA 2.0 track, 'Delta Force 2' has some nice auditory punch to it. Dialogue is crisp and clean and never a problem to hear. Some of the dubbed in dialogue moments have that 'canned' sound to it, but otherwise there aren't any issues there. All of the elements, the dialogue, sound effects, and the score by Frederic Talgorn have plenty of space and rarely overlap or drown out each other. Imaging is also a lot stronger here providing a noticeable amount of channel movement. The track keeps to the midranges without any tonal spikes to speak of ensuring that levels stay relatively balanced. There are a couple of moments in the beginning where it could be a little difficult to hear what was being said, but after that I didn't feel the need to adjust my volume levels - even during the big final action scenes. All around this audio track serves the movie well and sounds a whole heck of a lot better than the one that was supplied for 'The Delta Force.'

If you're a Chuck Norris fan, 'Delta Force 2' is a solid action adventure fantasy flick that features everyone's favorite high-kicking bearded hero taking on America's cocaine problem. It's a fun movie and should be viewed as such. Kino Lorber has brought 'Delta Force 2' to Blu-ray with a serviceable A/V presentation that outpaces the one supplied for the first film's Blu-ray debut back in 2012. Extras are only a collection of trailers. Fans of the film should be happy to have this one, and everyone else should get a kick out of it. Worth a look.

Sale Price 16.19
List Price 29.95
Buy Now
3rd Party 14
In Stock.
See what people are saying about this story or others
See Comments in Forum
Previous Next
Pre-Orders
Tomorrow's latest releases