In 2024, the manufacture and consumption of drugs has been legalized. Drecks are an elite unit created by an over-stretched police force to keep the black market dealers off the streets and the licensed drug companies rich. When Dreck and former addict Frank Grieves is called to investigate an unidentifiable corpse, he makes a connection to the biggest and most powerful drug producer of them all: The Ambro Company. But Ambro have friends in high places and as his corrupt superiors turn on him, Grieves finds himself cut loose by the law and separated from the people he loves. The only way to clear his name is to find the identity of the dead body and its connection to Ambro. But not even Grieves is ready for what the future has in store.

Solid science fiction filmmaking requires a lot of world building effort in order to be effective. The audience needs to know the time period they're looking at, get acclimated to a possible future and accept the advances in technology, and they also need to find a grounded human element in order to feel a part of this new world. If one thing falls out of place, the filmmaker risks losing their audience's suspension of disbelief. 'Narcopolis' from Writer and Director Justin Trefgarne is a movie that at the outset does an impeccable job of world building to bring us a possible future where all narcotics are legal and regulated. Unfortunately, a late in the game plot twist jumps the proverbial shark and the film has a difficult time recovering momentum in the home stretch.

It is the year 2024. In order to rid the world of the illegal drug trade and lethal narcotics, the manufacture and distribution of intoxicating drugs has been legalized and regulated. The Ambro corporation under the guidance of Todd Ambo (James Callis) is the world's leading provider of safe, regulated legal narcotics. Unfortunately, the emergence of legal narcotics has created an underground black market for new ways to get high. In order to police the black market, a group of narcotics cops called Drecks was created. Addict Frank Grieves (Elliot Cowan) is a Dreck and feeds his addictions with a near limitless supply of contraband drugs, alienating his wife and small child in the process.

When a mysterious body turns up at a crime scene without ID or DNA file, Frank is determined to solve the crime, even if it means getting heat from his boss and risking reprisal from the Ambro corporation. When Frank bumps into Eva (Elodie Young) at a crime scene, he's thrown even further down an obsessive rabbit hole trying to get answers to a crime that for all intents and purposes has been erased from existence. As people attempt to execute Frank and his family, a discredited scientist by the name of Sidorov (Jonathan Pryce) may have the answers to Frank's mystery. 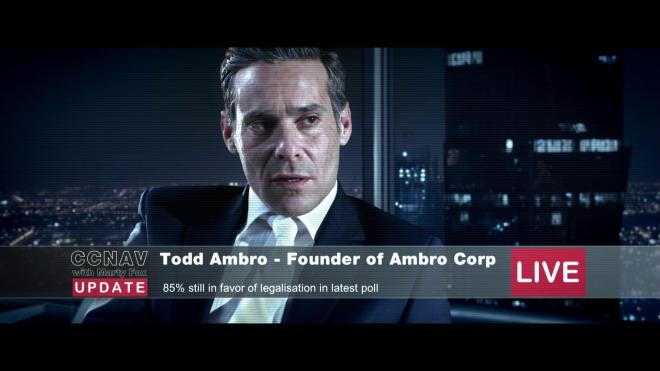 I'm just going to cut to the chase with this one and tell you why this movie falls apart - time travel. While this is a big plot twist, my mentioning it here isn't really much of a spoiler so much as a reason why the film falls apart. For the first hour or so of the film's runtime, we're treated to a carefully constructed, plausible science fiction thriller. We're given enough information to accept the world where drugs are now legal, we know enough to get why a special squad of police officers is needed, and we learn enough about our main character to feel for him and have a sense of who he is. So much of the plot feels like we're seeing some sort of corporate espionage spy thriller that when the big time travel plot bomb drops your initial reaction is to reject it. The movie in some ways sets up this idea of time travel a little bit, but so much of that setup feels like we're watching a flashback of future events, not a setup for time travel. How could it be something that silly? But the film goes with it and unfortunately, undercuts all of the great work leading up to that moment.

The shame of this plot twist is that this movie was very entertaining and was working. It was building an intricate mystery, it had raised the stakes for our protagonist when his wife and child are threatened, it had built a plot thread of corporate greed and it was working. Up until the big reveal I had it pegged that the dead bodies and mystery surrounded a new lethal drug that the Ambro Corporation had concocted and was now trying to hide the evidence. That made sense. Corporate greed needing to protect a bottom line from the fallout of a harmful product was a perfectly sensible plot and one I was on board for. Then it turns out the drug somehow causes time travel and my brain just flat out rejected it. It took a great deal of effort to finish the final twenty minutes of the movie because it was such an unsatisfying twist that just didn't need to exist. It's a shame it came to that because 'Narcopolis' was an exciting and engrossing work of science fiction for about an hour.

'Narcopolis' arrives on Blu-ray thanks to Scream Factory and IFC Midnight. Pressed onto a Region A BD50 disc, the disc is housed in a standard Blu-ray case with a slipcover featuring identical artwork. The disc opens directly to the film's animated main menu featuring standard navigation functions.

'Narcopolis' features a slick 2.35:1 1080p transfer that makes you feel like you're seeing a real down and dirty future world. The film uses mostly practical effects and bright creative lighting schemes to create a future world without an over indulgence of CGI. Because of this, fine details are constantly on display allowing you to appreciate the scenery and costuming of a near-future world that is believable. Colors tend to be on the darker side of things to fit the film thematically, but there are several moments where primaries have plenty of pop and presence to them. Flesh tones tend to look on the sickly side of things but considering the story, that's by intent. Black levels are deep and inky with strong shadow separation ensuring that the image has a notable sense of depth to it. Since this was shot digitally, the image is immaculate and free of any notable compression issues or video noise effects.

'Narcopolis' is given a DTS-HD MA 5.1 audio track as well as a DTS-HD MA 2.0 mix. I'm not entirely sure why a 2.0 mix was included since the 5.1 mix works so well. The 2.0 track works on its own merits but loses a lot of the nuance and sense of space and atmosphere of the 5.1 surround track. The 5.1 track has a fantastic sense of imaging and space with plenty of channel movement and an abundance of atmospheric elements. Dialogue for both tracks is strong, but the 5.1 track feels more natural like the voice is coming from an actual person in a real space. Levels are rock solid and the track handles the film's shift from quiet investigative moments to action packed gun shots and drama. All around a great track but the 5.1 mix is the way to go.

Audio Commentary: Writer/Director Justin Trefgarne flies solo for this commentary and he has a lot to say. It's a solid commentary as he covers a lot of production details and how he drew a lot of inspiration from Phillip K. Dick stories to influence his world building.

Behind the Scenes: (HD 16:40) This is a pretty cool, better than the average, behind the scenes making of extra feature. In a quick amount of time, they cover a lot of great material.

Deleted Scene: (HD 3:32) It's easy to see why this scene was cut, I can't really go into it without spoiling some scenes.

'Narcopolis' is almost a great work of science fiction, but unfortunately, the film tries to do too much with a very simple straightforward concept. It's worth a viewing but I was let down by an unnecessary twist to the plot. Scream Factory with IFC Midnight have brought 'Narcopolis' to Blu-ray in fine order featuring a fantastic A/V presentation with some pretty decent extra features. Give it a rent.