Overview - Tony Jaa, the martial arts master who "is as mesmerizing as ever" (Entertainment Weekly), stars in this epic tale of revenge set hundreds of years in the past. This prequel to Ong-Bak: The Thai Warrior takes Jaa's skills to the next level, showcasing him as a master of a wide range of martial arts styles. "The beatdowns are epic, with several jaw-dropping set pieces. The climactic scene qualifies as one of the best martial arts fight scenes ever." (LA Daily News).
OVERALL
Rent it

If you've never seen martial arts master Tony Jaa in action check out this clip, then return to the review.

Now that you've seen the type of stuff Jaa is capable of you're ready to experience 'Ong Bak 2.' The best martial arts films are usually deep and soulful experiences ('Fearless') or brilliantly choreographed slugfests. 'Ong Bak 2' is the latter.

The plot is somewhat familiar. Tien watched his father, the king, killed by a traitor when he was a child. Tien is rescued by one of the men loyal to his father, but the man is soon killed trying to help Tien escape. Thrown into the bushes, Tien is soon picked up by slave traders and brought to a camp in the forest where he is forced to fight with a crocodile in a muddy pit. The camp is attacked and seized by a band of rebels. Tien is taken under their wing to be trained in the ways of the martial arts.

We all know at some point in the film Tien is going to exact revenge on the people who betrayed and killed his father. What's fun to watch is how he gets to that point by punching, kicking, and slashing his way through hordes of enemies.

Featuring nothing new in the plot department, 'Ong Bak 2' instead stuns with the sheer choreographed brilliance of its action scenes.

Tony Jaa is a master at his craft, giving us flashes of what Jackie Chan could do in his younger days, only (a lot) meaner. Jaa performs moves and stunts without the help of CG or wires, which is amazing in its own right.

There's a scene where Jaa and his attacker fight atop an elephant that Jaa's character has tamed earlier in the film. The fight is flabbergasting. Both fighters jump, run, and roll on the elephant as though it was flat ground. The amount of room for error is paper thin. When Jaa flips around after being assaulted and lands sideways across the elephant's tusks, you may have to pick your jaw up off the floor.

Something else to marvel at during this film is the fact that the cameraman had the presence of mind to successfully hold the camera still during the action scenes. Jaa and Panna Rittikrai co-directed 'Ong Bak 2' and they should be commended in the purposeful framing of each extended fight scene. Too often nowadays we are assaulted by the shaky-cam effect during stunningly choreographed action pieces (see: 'Quantum of Solace'). Jaa and Rittikrai pull the camera back, and hold it still so we can fully observe and appreciate the violent dance.

The film, in general, is very generic, even featuring the patented Martial Arts Learning Montage. The unoriginality of the screenplay holds it back from being a real winner. Let's face it though; you're not watching 'Ong Bak 2' for the in depth plot, or its spiritual undertones. You're interested in watching it because it promises some fantastic fighting sequences. In that area the movie doesn't disappoint one bit. 'Ong Bak 2' is balls-to-the-wall action. Jaa is a sight to behold on screen. He gives you what you came for and more.

Set in the lush green jungles of Thailand, we'd expect the 1080p/VC-1 encoded transfer of 'Ong Bak 2' to be a brilliantly saturated, fully rendered Blu-ray experience. I wish that were true. There are some scenes of stunning clarity and rich color, but far too often this transfer is plagued with problems ranging from downright terrible contrast to ugly horizontal banding that appears for no reason during fade-to-black transitions. At one point a large light-green bar appears in the middle of the screen as the scene is transitioning. Very ugly. Blacks range from inky to unsightly grays. During the beginning of the film blacks take on a bluish hue that plays tricks with your eyes, making you think you may need to adjust your TV's settings or clean off the screen.

Daytime scenes fare better than the, at times, horrendous dark scenes. Some of the lighter scenes harbor lushly rendered colors and finely detailed textures and facial features. Far too many scenes suffer from softness though, especially in the last third of the film. Overall, this is a very inconsistent transfer ranging from the beautiful to the awful. 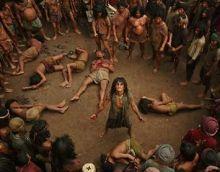 The DTS-HD Master Audio 5.1 track fares much better, but isn't without its flaws too. First off, the movie defaults to the English 5.1 track with English dubs. You have to manually go in and select the Thai 5.1 track and English subtitles if you don't want to deal with the hokey sounding dubbed track.

The soundfield here is quite engaging with noises and events happening throughout the surrounds. Panning effects with horses galloping and arrows flying across the screen are examples of fine directionality. Where the audio presentation falls apart is the prioritization of the dialogue compared to the sound effects and ambient noise. Never did I think dialogue could drown out the music and sound effects, but here it happens quite often. The dialogue part of the track seems to be turned way up, while the effects and soundtrack come across as flat and tinny. Prioritization proves to be a huge problem here. The mix just isn't very well-rounded and it shows. 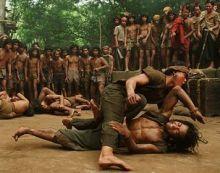 Even with the astonishing fight scenes, 'Ong Bak 2' still comes in as a rental suggestion due to its extremely sub-par video and its slightly disappointing audio. A title like this we should ensure a perfectly immersive audio/visual experience. 'Ong Bak 2' fails to deliver on both fronts, and suffers because of it.

Sale Price 16.98
Buy Now
3rd Party 34.99
In Stock.
See what people are saying about this story or others
See Comments in Forum
Previous Next
Pre-Orders
Tomorrow's latest releases