Jay Killion had been the presidential bodyguard, but for the inauguration of the recently elected president, he is assigned to the first lady, Lara Royce Lara, a perpetually indignant, arrogantly feministic lady, initially hates the methodical and rules-following Killion, and so she does all she can to avoid him and disregard his safety procedures. The story complicates, however, when repeated attempts are made on Lara's life. Eventually, the shaken Lara decides to trust Killion's instincts and precautionary methods, and the pair embark on a difficult and often perilous cross-country journey, with the assassins close on their heels.

When you plug in a movie starring a certain actor, especially one made during a particular decade, you naturally come to the show with a certain set of expectations. Sure, you may want to see the performer grow beyond a prescribed persona, but deep down, you still want to see some signature traits they're known for. For better or worse, Charles Bronson is widely remembered as a 70s and 80s tough guy who starred in a slew of rough and tough vigilante movies. While he never really loved this aspect of his career, he wisely exploited it so he could keep working in an industry that was hiring him less and less. That said, you can't fault the guy for wanting to shake things up with 1987's action comedy 'Assassination.' While not the best movie ever made, it tries hard to be fun, and most of the time it succeeds.

Jay "Killy" Killion (Charles Bronson) is a former special forces soldier who has spent the last several years of his life and the remaining days of his failed marriage as a dedicated member of the Secret Service tasked specifically to protect the First Lady. Now that Ronald Regan and wife Nancy are out of the oval office, Killy and his spunky partner Charlotte (Jan Gan Boyd) are tasked to "Momma One" the new first lady Lara Royce Craig (Jill Ireland). As a rich upper crust socialite, Mrs. Craig becomes an increasingly demanding headache for Killy and his team to the point that he laments Nancy's absence.

Killy's simple and routine detail becomes a lot more interesting and potentially deadly when the First Lady has been targeted by an assassin. The First Lady doesn't believe in the threat at all, explaining away an exploding motorcycle or the explosion of her yacht as simple accidents. When the President orders the First Lady back to the safety of the White House, Killy is relieved that his assignment of protecting this insolent woman is going to be at a safer place. At least that's how everything should have happened. When their transportation is cut off, Killy and the First Lady are going to have to travel from California to Washington DC - incognito if possible - before the assassins catch up to them. If Killy and the First Lady have any hope of surviving the assassins' deadly designs, they're first going to have to learn how to like each other and actually work together. 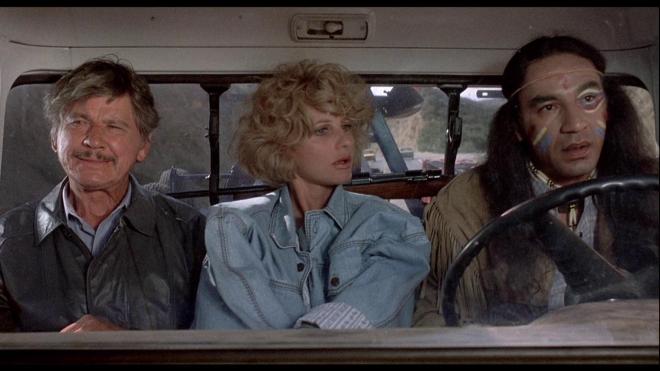 If you look at the amazing library of fun and entertaining Charles Bronson flicks out there, many of which were produced by the Cannon Group's Menahem Golan and Yoram Globus, it's impossible not to see a pattern in Bronson's output. That pattern usually involved the actor playing a gruff sort of man desperately wanting to live a peaceful life, but when some bad dudes make that life impossible, he punishes them with a gigantic gun of some sort.  When that sort of film is pretty much all that Bronson made for about 20 years, it's difficult to knock the guy for wanting to make something different with 'Assassination.'

Directed by Peter Hunt from a script by Richard Sale, 'Assassination' plays like a buddy action comedy mashup of 'Midnight Run' and 'In the Line of Fire.' With his wife and frequent co-star Jill Ireland along for the ride, you start to feel like you're watching a goofy family vacation video of sorts. The comedy tends to outweigh the action beats, making the film a bit clunky but still very entertaining. Part of the issue with 'Assassination' is that it's so desperate to keep the film light and fun but still build suspense that it has a tough time with balance. The front end of the movie is pretty humorous as Killy meets and immediately gives the First Lady a black eye while protecting her. Unfortunately that humor undercuts the suspense of a failed assassination attempt. And that's pretty much how the film progresses; lots of comedy, something action packed happens, then more comedy. Through it all, we have the husband and wife duo of Charles Bronson and Jill Ireland in the last film they co-starred together before her untimely death. The acting may not be great, but the pair shared an obvious chemistry considering the number of films they made together.

If there is a plot thread that's dragging 'Assassination' back a bit is the budding romance angle between Killy and his partner Charlotte. She seems all too eager to jump into the sack with him that she's difficult to take seriously - but then I'm betting we're not exactly supposed to take her too seriously given the nature of the movie. Jan Gan Boyd's performance is a bit irritatingly one-note, but at the same time, she does bring an amount of energy to the part that makes her a nice counterbalance to the surly Bronson. In the end, none of the character depth really matters all that much once Bronson breaks out the bazookas and his motorcycle with a mounted machine gun! It was nice to watch Bronson be comedic and entertaining for a change, but the fun truly starts when the explosions start ripping across the screen and we have a bad guy on a dirt bike flying through a ball of fire. 'Assassination' may not be the best Bronson movie, but it's darn good fun for one of the legendary actor's lighter films.

'Assassination' arrives on Blu-ray thanks to Kino Lorber and their Studio Classics line. Pressed onto a Region A locked BD25 disc, the disc is housed in a standard Blu-ray case. The disc loads directly to a static image main menu with music from the film playing featuring standard navigation options.

For one of the lesser Bronson Golan Globus ventures, 'Assassination' arrives with a bright and well-detailed 1080p 1.85:1 transfer. Film grain is apparent and stable creating a pleasing film-like appearance with strong facial features, costuming details and scenery moments - especially the farm assault action set piece. Colors are stable allowing for a nice and healthy flesh tone pallet with strong primaries and earth tones. At times it does appear that contrast has been boosted a tad, some of these daylight sequences look a bit too bright and can sometimes soften details and skew colors a tad, but not terribly. Black levels are stable with some solid inky dark tones with good shadow separation to give the image a nice three-dimensional vibe. On the negative side of things, there is a fair bit of edge enhancement employed throughout this transfer. The image can look too crunchy at times and can create some banding issues with the wonderful 80s patterned clothing. Those are the only anomalies worth mentioning as there doesn't appear to be any DNR used for this transfer. Aside from some very mild speckling, the opening credits look the worst, the print is relatively clean and damage-free.

'Assassination' comes packed with a very strong English DTS-HD MA 2.0 stereo mix. Dialogue comes through crisp and clear without any interference from the score by Robert O. Ragland or the numerous gunshots and explosions. Speaking of gunshots and explosions, those are the signature sound effects for any Golan Globus Cannon production and they're thunderingly wonderful throughout this film. Even as a standard stereo mix, the audio has a nice sense of space and dimension with a strong use of background audio and atmospherics. Without any age related anomalies like hiss or pops, this an all around solid audio mix.

'Assassination' may not be a great film, and it may not be the best Charles Bronson starring film, but it does prove to be a very entertaining way to burn 88 minutes. Bronson proves yet again why he was one of the toughest guys around during the 80s action movie heyday. Kino Lorber brings this film to Blu-ray with a pretty solid video transfer and a strong, explosion-filled audio track to match. Extras are a collection of trailers. This one may not appeal to everyone, but Bronson fans should be very happy to have it in their collections. Worth a look.

Sale Price 129.95
Buy Now
3rd Party 159.99
In Stock.
See what people are saying about this story or others
See Comments in Forum
Previous Next
Pre-Orders
Tomorrow's latest releases