Overview - The year is 2019. Television is now ruling people's lives. The most popular "audience participation" game show is The Running Man-where convicts can win pardons instead of "parting gifts" by defeating murderous henchmen known as "stalkers." The stalkers haven't had much of a challenge lately...until Ben Richards (Schwarzenegger) comes along.
OVERALL
A Guilty Pleasure

I have a soft spot for "near future" sci-fi movies. The cheesier and more ridiculous the movie's speculative vision of the future may be, the more entertaining I find it. Bonus points if the future year that the film is set has already come and gone in the real world, with no evidence of any of its scientific advances or apocalyptic disasters. Even better if the picture's once-amazing technology is already painfully outdated. 'The Running Man' is a treasure trove of such guilty pleasures. Although we still have a few years yet before we get to the 2019 depicted in Arnold Schwarzenegger's 1987 action hit, I kind of doubt that the United States will turn into a totalitarian police state ruled by major corporations and media conglomerates within that time. Wait a minute, what am I saying? We may already be halfway there. Maybe this movie is more prophetic than I realized?

One thing 'The Running Man' gets absolutely right is the popularity of inane "Reality" TV shows. You can thank Stephen King for that. He really called that one. The movie was directed by Paul Michael Glaser (the Starsky from 'Starsky and Hutch'), based on a novella that King wrote under his Richard Bachman pseudonym. Schwarzenegger stars as Ben Richards, some sort of S.W.A.T.-like paramilitary officer who gets in hot water after he disobeys direct orders to machine gun down a group of unarmed protestors. For his insubordination, he's framed for the slaughter and sentenced to maximum security hard labor. On the bright side, in this time, the country's most popular TV series is a Reality show in which hardened criminals compete in a 'Most Dangerous Game'-style competition. The convicts must race through a deadly obstacle course while being chased by a bunch of costumed 'American Gladiators' wannabes armed with chainsaws, electrified weapons, and flamethrowers. If they survive, the contestants will win their freedom. Of course, few survive. Fortunately, Ben is played by Arnold Schwarzenegger, so you can probably already see where this is going.

'The Running Man' is a mid-tier Schwarzenegger effort. It's nowhere near the classic that 'The Terminator' or even 'Predator' (released the same year) have become. Arnold's acting is particularly weak in this one. His co-star Maria Conchita Alonso (later of 'Predator 2') looks great in her spandex costume, but the character is an annoying shrew. The script is filled with plot holes and half-thought-out ideas. Its satirical elements (once arrested, Ben is assigned a court-appointed theatrical agent) are very broad and over-the-top.

The movie's low-budget special effects and matte paintings have dated pretty hilariously. As far as dystopian visions of the future go, this is very much a poor man's 'Blade Runner' knockoff. If we're to believe it, leotards and big hair are destined for an imminent comeback. The technology is also laughable. Bulky CRT TVs and computer monitors abound. Audio cassettes are still popular. Apparently, cutting-edge computer hacking consists of typing the same single-line DOS command into a terminal repeatedly until it finally takes.

In other words, if you have any appreciation for '80s sci-fi cheese, 'The Running Man' is great goofy fun. Although not especially innovative in any regard, it has plenty of the bad puns and bone-crunching action that Schwarzenegger's fans demand. Perhaps its greatest asset is the casting of smarmy 'Family Feud' host Richard Dawson as the villain of the piece, who is in turn host of the fictional 'Running Man' show. It's an inspired choice, and Dawson hams his part up to heart's content. Also making appearances are Yaphet Kotto, Jim Brown, and Schwarzenegger's 'Predator' co-star Jesse Ventura (as an aerobics instructor!). Look for Mic Fleetwood and Dweezil Zappa in bit parts. Even the backup dancers on Dawson's show were choreographed by none other than Paula Abdul.

'The Running Man' may not be a "good" movie. But it's a classic cheesefest all the same.

'The Running Man' comes to Blu-ray from Lionsgate Entertainment. The disc has only one annoying trailer before the main menu, which is pretty restrained for this studio. I usually expect 7 to 10 trailers at the start of Lionsgate discs. 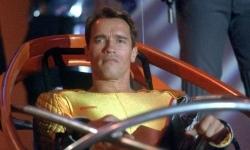 For a marginal catalog release of a low-budget movie, 'The Running Man' looks decent enough in high definition. Lionsgate has certainly not spent any big bucks to restore the picture to pristine standards. But they didn't screw it up too terribly (as they have on other movies from the era) either.

The 1080p/AVC MPEG-4 transfer is presented at a 1.78:1 aspect ratio, slightly opened up from the film's theatrical 1.85:1 ratio. The difference is negligible and not worth worrying about. The image is a bit soft but has acceptable detail. The photography is frequently grainy, and the grain has been retained without any overt Digital Noise Reduction artifacts. Nor does it suffer from any obvious Edge Enhancement or artificial sharpening.

The picture does look a little too dark, though. As a consequence of this, colors also seem a bit oversaturated. This Blu-ray will probably never be pulled off the shelf for an eye candy treat, but altogether is an acceptable presentation for the movie. 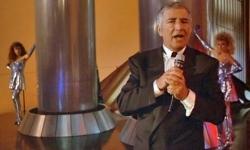 Bass has been obviously beefed up, which leaves the audio sounding rather boomy. Gunshots sound hollow, without enough crackle on the high end. At the same time, for as much as the low end has been boosted, it still never digs especially deep. Considering the source, the audio quality is (like the video) acceptable enough, but never spectacular. 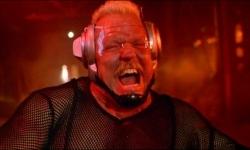 The Blu-ray carries over most of the bonus features from the Special Edition DVD released back in 2004. For a 2-disc set, the supplements on that DVD edition were pretty sparse.

For some reason, the options to select either of the audio commentary tracks are located only in the disc's Setup menu, not in the Special Features menu where you'd expect to find them.

Never underestimate the power of a cornball '80s sci-fi movie to entertain. Especially when Arnold Schwarzenegger stars. 'The Running Man' is no great science fiction masterpiece, but it's still a lot of fun anyway. The Blu-ray is a solid catalog release of a guilty pleasure movie. The disc looks and sounds OK, and carries over the limited supplements from the DVD. If you're inclined to want to own 'The Running Man', this disc will do fine.

Sale Price 34.99
Buy Now
3rd Party 17.36
In Stock.
See what people are saying about this story or others
See Comments in Forum
Previous Next
Pre-Orders
Tomorrow's latest releases