A pitch-black comedy with style to burn, A Hard Day depicts a day-in- the-life of a cop that goes from bad to worse to cursed. Driving back from his mother's funeral, homicide detective Gun-soo (Lee Sun-kyun) runs over a man in a dark rural street. In a moment of desperation, he dumps the body in a coffin alongside his mother. The disappearance of his accident victim is investigated by a colleague, and, making matters worse, a witness steps forward, a detective named Park (Cho Jin-woong). Park's motives are less than savory, and he begins issuing threats that become more vicious and hit closer to home. Eventually Gun-soo decides to face Park head-on once and for all.

Dark comedies are an iffy bunch of movies. These are films that unless you have something of a twisted sense of humor, you're just not going to get the joke. Some movies excel at this, others fail miserably. It's a game of balance  where on one side you want things to be funny and yet on the other side you don't want things to be too silly. Kim Seong-Hun's 'A Hard Day' starring Lee Sun-kyun is a black as tar dark comedy that features a hapless man who finds himself stumbling into one awkward situation after another.

Geon-soo (Lee Sun-kyun) is a homicide detective in mourning the loss of his mother. While driving to the funeral, he swerves to miss a dog in the road and ends up hitting and killing a man. As his police unit is already being investigated for corruption, an accidental vehicular homicide charge is pretty much the last thing Geon-soo needs in his life. With no other choice, he drags the man's body into the trunk of his car hoping to dispose of it after the services for his mother. Only things aren't going to be that easy for Geon-soo.

Not only is Geon-soo having to handle his grieving family members, but he must also work out a plan for his fellow officers who are facing corruption charges from Internal Affairs. If that wasn't enough, Geon-soo learns that his car is about to be searched - with the dead body still inside - and he comes to find out that someone else was on that deserted stretch of roadway and saw everything that happened when Geon-soo killed the man with his car. As the number of problems facing Geon-soo increase and the severity escalates, it becomes harder and harder for the homicide detective to keep his chin above water. It doesn't help that he has a corrupt fellow officer threatening to expose Geon-soo's crimes. 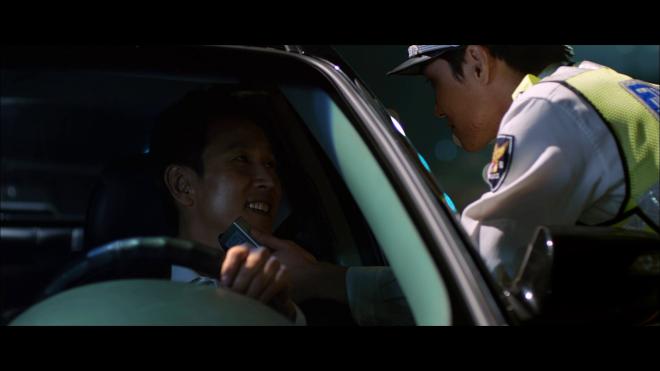 'A Hard Day' is the best and worst sort of movie. It's the best because it's an amazingly hilarious film where the level of awkwardness escalates by the minute and the film becomes more and more deliriously and uncomfortably funny. 'A Hard Day' is also the worst sort because it's one of those movies where the moment by moment plot beats and events can't really be talked about and explained without spoiling the film's funniest moments. It's also difficult to talk about a favorite sequence out of context because the humor of the moment depends entirely upon what had just happened moments before.

Since I can't really talk about the plot points, you're just going to have to take my word for it that 'A Hard Day' is a funny movie. Director Kim Seong-Hun uses all of the best elements of a thriller to build tension and a level of uncertain terror, but then the situations themselves are so uncomfortably elaborate that you can't help but laugh. Watching Lee Sun-kyun's Geon-soo have to come up with intricate solutions on the fly - like what to do with a dead body that has been shoved into an air vent for example - just becomes silly. Now, I'm willing to concede that a lot of this humor is a bit twisted, but those fans of black humor should have a field day with this movie.

As darkly wonderful as 'A Hard Day' is, it does become a bit of a patients test at times because your nerves become so rattled that you may be compelled to take a break. Another slight issue with the film is that it starts to run out of steam in a few places - especially when Geon-soo starts to be blackmailed. It would have been something if the film had been able to keep the antics within a realtime stretch of story, like 90 minutes of uncomfortable hilarity, but when the story starts to stretch out, that tension starts to diminish. Thankfully the film finishes strong and becomes one of those movies that I want to recommend to everyone - even though I know only a few people are going to actually get the humor in 'A Hard Day.'

'A Hard Day' arrives on Blu-ray thanks to Kino Lorber and is pressed onto a Region A locked BD50 disc. Housed in a standard case, the disc opens directly to the main menu.

'A Hard Day' provides a strong if a bit inconsistent 2.35:1 1080p transfer. Shot digitally, much of the film features a delightful amount of detail, color pop, and fantastic black levels - until it doesn't anymore. There is no rhyme or reason for it, but every now and again, the image loses the sharp quality that it was previously enjoying and the black levels lose some of their luster and the image becomes notably flatter-feeling. That isn't to say this is a frequent occurrence, it only happens a few times throughout the film's run, but it was something worth mentioning at the outset. By comparison, the rest of the movie is pretty fantastic with strong detail levels that allow you to appreciate facial features and the film's production design. Colors are a bit muted at times, but there is still the right amount of primary pop with accurate healthy looking flesh tones. Black levels are rich and inky and can bring a solid three-dimensional sense of depth to the image. Aside from those brief few moments, this is a rock solid transfer.

A key element of the tension-filled humor of 'A Hard Day' is the film's impressive sound design work. The Korean DTS-HD MA 5.1 track serves this film beautifully. The film is quiet by nature allowing for the tension to build through the lack of sound, silence, in this case, is madness. Through these moments, the surrounds are engaged with a clever use of background effects and ambient sounds that create a great sense of presence throughout the film. Likewise, imaging is pretty great as there is just the right amount of channel movement to keep this track feeling alive and real without sounding forced or overblown. Dialogue is crisp and clean, and this Korean language track is accompanied by a well-translated set of English subtitles. Levels are spot on ensuring that you don't have to adjust your volume. All around this is a great audio track that serves the film perfectly.

Deleted Scenes: (HD 23:21) These are some decent deleted scenes that help round out the characters and their relationships, but considering the pacing and the style of humor the film was going for, this level of exposition wasn't entirely necessary.

Making Of: (HD 17:29) Your basic EPK style extra feature that offers up a lot of information from the cast and crew about the production, casting, and filming. It's a pretty good watch for how short it is, it's better than average.

Bad VS Worse: (HD 7:24) This feature provides a little more history and backstory of the characters. It's not really necessary, again because the more exposition we're given the more it bogs down the story itself.

Theatrical Trailer: (HD 1:36) A solid trailer that sets up a lot of the dark humor of the movie without spilling the beans or giving away the best moments.

There's something great about discovering a good black comedy like 'A Hard Day,' a movie that makes you so tense and uncomfortable that the only outlet you have left is to laugh. While it may have a couple slow spots here and there, the film proves to be a ton of fun and a great way to spend an evening. With a beautiful image transfer, a strong audio track, and a smattering of decent extra features, I'm calling this Blu-ray disc from Kino Lorber recommended. It's well worth the time, and the movie is a riot.

Sale Price 19.99
List Price 29.95
Buy Now
3rd Party 9.46
In Stock.
See what people are saying about this story or others
See Comments in Forum
Previous Next
Pre-Orders
Tomorrow's latest releases