When four generations of the Cooper clan gather for a reunion, a series of unexpected visitors and unlikely events turn the night upside down-leading the Coopers toward a joyful rediscovery of family bonds and the magic of love.

The family melodrama is a mainstay of movies. Dozens are made each and every year and unfortunately, most of them are unmemorable. While they offer a fantastic opportunity for multiple generations of actors to share some screen time together, a number of these films turn out to be trite, paint-by-numbers, predictable cliches. Sure, there are a few gems in the bunch, but for every 'Home for the Holidays,' there are a dozen other titles that aren't even worth remembering, let alone watching. 'Love the Coopers' starring an impressively talented cast featuring Alan Arkin, John Goodman, Diane Keaton, Amanda Seyfried, Marisa Tomei, and Anthony Mackie sadly falls into the unmemorable category.

It's Christmas time and the Cooper family is going all out for the holiday, as is their tradition. While their plucky dog Rags looks on, the Coopers go about their lives trying to maintain a facade that everything in their lives is going according to plan. Charlotte (Diane Keaton) and Sam (John Goodman) Cooper are hosting their traditional Christmas get together. While they put on a brave face, underneath, their marriage is crumbling. After a trip to Africa failed to pan out, the couple is calling it quits - unbeknownst to their children. Charlotte and Sam's son Hank (Ed Helms), is divorced from his wife Angie (Alex Borstein) but they remain close - but not close enough to tell her he's lost his job and won't be making alimony payments, or buying the kids bikes for Christmas. Meanwhile, their daughter Eleanor (Olivia Wilde) believes she doesn't measure up to her parents' expectations. She believes this so strongly that she doesn't want to leave the airport and ends up befriending a soldier named Joe (Jake Lacy) who is about to be deployed.

As this is all happening, Charlotte's younger sister Emma (Marisa Tomei) has been caught shoplifting and is on her way to jail in the backseat of Officer Williams' (Anthony Mackie) police car. Charlotte and Emma's father Bucky (Alan Arkin), learns that his favorite waitress and friend at the local restaurant he goes to every day named Ruby (Amanda Seyfried) is leaving town to restart her life - much to Bucky's dismay. Meanwhile, Sam Cooper is reminded of all of the goals he hasn't achieved in life because his senile Aunt Fishy (June Squibb) thinks he's achieved and done everything he's set out to accomplish - like going on a trip to Africa. As everyone in the Cooper family and extended family attempts to make everyone believe everything is A-OK, they're about to learn that being open, honest, and confronting issues head on is the key to happiness and joy - especially during the holidays. 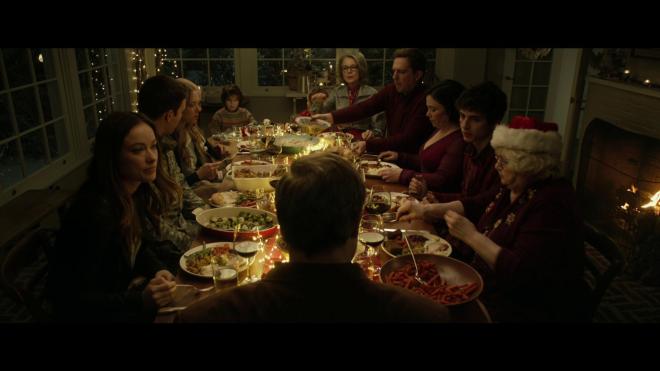 I'll just come out and say it, I did not love 'Love the Coopers.' While I appreciate the earnest effort Director Jessie Nelson and screenwriter Steven Rogers put forth, the movie itself is a cavalcade of cliches. This in of itself wouldn't be terrible if each and every character hadn't fit a cliched character mold as well. As I sat down to watch 'Love the Coopers, it didn't take me long before I starting saying "of course" to every plot beat. Of course, Sam and Charlotte are getting a divorce because they fail to communicate. Of course, there's a foul-mouthed little girl that overheard and is now repeating bad words. Of course, Hank feels he's a failing father because he's been replaced by a robot. Of course, Bucky likes Ruby because she reminds him of his late wife. Of course, Eleanor and Joe become a one-night-romance because she's a super liberal and he's an ultra conservative, and so on and so forth. The whole movie follows those predictable character concepts and plot beats to the point that you know when there's going to be a medical emergency involving a member of the family and that this is the event that will bring everyone together - because that's what always happens.

I will say that I was surprised - not pleasantly - that this entire story that had been nicely narrated by Steve Martin was in fact, told through the eyes of the family dog Rags! You read that right. Rags the dog is some sort of omniscient Dog-God that can see and observe the inner demons and fears of our cast of characters and play witness to events that the furry mutt isn't present for. Up until this final reveal, I was actually okay with what I had seen of the film. I didn't love the movie, I felt like I was a marathon ahead of it at all times, but I was at least, comfortable with it and let it be a bit of mindless entertainment. Then that final trite turn comes in and I literally smacked my head in disbelief.

Beyond the revelation of the true identity of the family pet, 'Love the Coopers' simply boils down to a wasted cast. You can see everyone working really hard to make this material land an emotional punch, but because this story is so over-stuffed with convenient emotional fodder, nothing hits the way it should. Alan Arkin's Bucky is about the only character that works throughout this entire film. Had the film focused 90% of its attention on Arkin and his character's unconventional friendly relationship with Ruby, this could have been a gem of a film. She's a young woman that doesn't want to be rescued anymore and he's an older man who wants to throw her a lifeline. There's nothing romantic about their scenes, it 100% lives in the realm of human kindness and mutual friendship and how difficult it can be to maintain something like that, but it's compelling enough to be its own movie. That is a movie that I would have loved to see, especially with these two actors attached. Everything else 'Love the Coopers' has to offer can be tossed in the recycling bin. I wish I could recommend this one but aside from a few moments, I just can't.

'Love the Coopers' arrives on Blu-ray thanks to Lionsgate and is pressed on a Region A locked BD25 disc. Housed in a 2-disc eco-friendly Blu-ray case with an identical slipcover. Inside a DVD and a Digital HD voucher are also included. The Blu-ray opens up to several trailers for upcoming Lionsgate releases before arriving at the main menu.

'Love the Coopers' features a nicely detailed and colorful 2.40:1 1080p transfer. Since this is a Christmas holiday season film, it features the standard snowy scenery with deep green trees and numerous warm-looking twinkly lights throughout most of the film. Primaries are robust and plentiful without being too overpowering. Reds dip towards deep rouge and blues appear a bit deeper, more navy toned. Flesh tones appear accurate and healthy throughout so no one is too pink or too sickly pale. Considering the digital photography, the image offers up some strong detail levels and maintains a pleasant appearance without looking too "video" and absent any video noise or other distracting effects. Black levels are inky and offer up some strong shadow separation allowing for a nice amount of depth to the image. All around this is a fine transfer. It may not be demo-worthy but it gets the job done nicely.

With a DTS-HD MA 5.1 audio track 'Love the Coopers' cashes in on the holiday theme nicely. There is just the right amount of ambient sounds of wind and crunching snow to fill the atmosphere and make it feel like a winter movie. Dialogue is crisp and clear and never a trouble to hear. The score by Nick Urata does a great job of filling the quieter moments and Steve Martin's narration occupies the right amount of present space as to let the background elements to be heard without being too powerful or forceful. Imaging is decent, but aside from the previously mentioned atmospheric elements, this is largely a front/center channel affair with few immersive surround moments. Levels are spot on without any need to monitor volume. Like the image transfer, this audio track gets the job done but is hardly demo material.

Making 'Love the Coopers': (HD 12:12) Your standard issue EPK cast and crew interviews. Nothing too revealing here beyond the usual stuff that you see churned out for your average Blu-ray release.

Rags the Dog: (HD 1:16) A very short look at the dog and ultimately the narrator of the film.

Fun on Set: (HD 00:54) A very short interview segment with the kids in the film.

Going into 'Love the Coopers' I wasn't expecting much. I'd heard it took a beating at the box office and by critics so I had my expectations appropriately lowered. Sadly, the film itself just isn't that great - especially when you factor in the incredibly talented cast involved. When you read the cast list you expect to see some sparks and some magic onscreen, aside from Alan Arkin, it's a pretty tame, cliche-riddled affair. Lionsgate has brought the film to Blu-ray with a decent A/V presentation but the extras lack genuine substance. If you're very curious, rent first, otherwise skip it.