In this all-new monster comedy adventure, everything seems to be changing for the better at Hotel Transylvania! However, Drac is worried that his adorable half-human, half-vampire grandson, Dennis, isn’t showing signs of being a vampire. So while Mavis is on vacation, things get batty as Drac enlists his monster friends Frank, Murray, Wayne and Griffin to put Dennis through a “monster-in-training” boot camp!

Adam Sandler, once more, figuratively dons the fangs, the black flowing cape, and a hokey Romanian accent while complaining he doesn't say "blah . . . blah blah" for 'Hotel Transylvania 2.' "I only say it when I say I don't say it!" Although better known for low-brow raunchy comedies to which film-snobs instinctively turn up their noses, Sandler has proven himself a lovable doofus who attracts younger audiences with two successful animated features to his credit. As the Prince of Darkness with the magical powers to turn into a bat, kids apparently love the comedian's take on Dracula as an overprotective father to Selena Gomez's stir crazy teenager Mavis. The once infamous and fearsome bloodsucker abandoned a life of hating and instilling fear into the hearts of humans to manage a high-class gothic hotel for other monsters also settling into middle age and the sometimes uneasy labors of parenthood. For the most part, the story of a parent coming to terms with their child growing up offered some mild laughs and the occasional chuckle, but little else.

This sequel to 2012's 'Hotel Transylvania,' which picks up a couple years later with Mavis and human Johnny (Andy Samberg) now married with a toddler of their own, Sandler reunites with his usual cohorts to voice other famous monsters while Dracula faces his toughest challenge yet. Is little redheaded Dennis (Asher Blinkoff) a vampire or a human? And with his fifth birthday quickly approaching and no sign of sharp teeth coming in, "vampa" Drac is growing anxious of raising another bloodsucker in the family. It probably goes without saying the anticipation and fear his adorable grandson might not follow family tradition leads to some highly irresponsible parenting techniques. Most negligent is throwing Dennis off an old, rickety wooden tower in the hopes of forcing the kid to fly like a bat and his fangs to pop out. Funniest moments, however, come from the monsters — Kevin James as pudgy Frank, Steve Buscemi as weary Wayne, David Spade as lonely single Griffin, and Keegan-Michael Key as Murray — coping with the limits of middle age and childhood haunts accommodating the 21st Century. 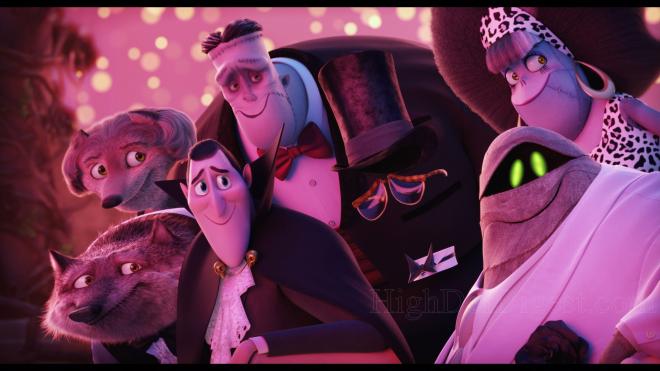 Like its predecessor, the best laughs for parents dragged into seeing this come from our favorite movie monsters losing the fearsome edge of their youth and succumbing to the demands of domestic life. With Dennis seeming more human than monster every day, Mavis and Johnny consider moving their son to a normal setting with other kids that are more to his speed and kind. Wayne's rambunctious wolf-gal Winnie (Sadie Sandler) is a little on the rough and rugged side, much like the other little critters roaming the hotel, but the two kids are obviously kindred spirits. For Drac, his worst nightmare is seeing his family living contently in the horrors of the suburbs with the über-conventional in-laws, voiced by real-life married couple Nick Offerman and Megan Mullally. The heated drama with Mavis resulting from Drac's child endangerment shenanigans understandably complicates their relationship, an aspect of the story that may go over the kid's heads but intended to keep adults engaged, but it's one of many stepping stones towards a predictable moral conclusion.

From a script by Sandler and Robert Smigel, 'Hotel Transylvania 2' delivers much of the same passable amusement as its predecessor with jokes ranging from goofy pratfalls that'll leave your little monsters screaming with laughter and several clever puns that'll make parents smile at the silliness. But the filmmakers also take more risks in this follow-up with a slightly scarier tone — and darker undertones — in a story that sees "vampa" emotionally wrestling to accept his grandson as is. The plot also tacks on Dracula's father, Vlad (Mel Brooks), in the final quarter to further drive this theme home — or more like hammer a stake through its heart. It makes for pleasing enough entertainment while the animation dazzles the eyes with various eye-gouging delights. Much of the presentation is extraordinarily detailed with astonishing lifelike movements, particularly in Dennis's puffy hair and Winnie's furry face. While the story and the few amusing comedic bits will keep parents from falling asleep, the stunning CG characters will hypnotize the little tykes from a squirming in their seats.

Sony Pictures Home Entertainment brings 'Hotel Transylvania 2' to Blu-ray as a two-disc combo pack with a code for an UltraViolet Digital Copy. The first is a Region Free, BD50 disc sitting comfortably on the panel opposite a DVD-9 copy and housed inside a blue, eco-elite keepcase with a small catalog of children merchandise. At startup, the disc commences with a series of skippable trailers before switching to an animated menu with music and full-motion clips.

The hotel opens for business once more with a spectacular, reference-quality 1080p/AVC MPEG-4 encode that'll make eyes bleed and human viewers swoon at the frightful sights. Immediately apparent is the superb detailing in the animation as characters move with incredible lifelike realism. Individuals hairs in both humans and the furry werewolf family are distinct and move independently of one another; the light freckles on Johnny's cheeks and nose are plainly visible; and Dennis's fluffy, curly red hair has a surprisingly natural bounce and flow. The super-fine threading in Mavis's black lace wedding dress is razor-sharp without the slightest hint of aliasing, and the most minuscule imperfections and flaws in the stones blocks of the castle are also very detailed.

Presented in its original 1.85:1 aspect ratio, the high-def presentation features a vast array of sumptuous colors, despite much of the story and action taking place at night. From the blood reds in Drac's angry glares to the beautiful moonlight blues of the night sky, richly-saturated primaries energize the frame while softer, secondary pastel hues, like the soft yellow glows of candles or the fiery oranges of a couple explosions, add warmth and vitality, keeping the dourest moments lively and upbeat. Contrast is pitch-perfect with sharp, crisp whites throughout, allowing for exceptional visibility of the tiniest object in the very distance. Black levels are inky rich with excellent gradations of the shadows during the many low-lit sequences, adding to the picture's already excellent three-dimensional quality.

The animated sequel greets audiences with a terrific and wildly entertaining DTS-HD Master Audio soundtrack that'll have the little monsters in the family screaming with joy. Much of the attention is kept in the wide and spacious soundstage thanks to a well-balanced channel separation. Various objects and discrete effect bounce back and forth across the screen with flawless, convincing panning. An excellent mid-range maintains distinct, detailed clarity, even during the loudest, action-packed moments where the listener can hear the tiniest branch break and leaves rustling as the Drac family fights a horde of Vlad's bat minions. Low bass is deep and responsive, particularly during the musical numbers and song selections, and dialogue is precise and intelligible in the center.

Although the soundtrack doesn't quite deliver a fully immersive aural experience, rear activity is nonetheless employed on several occasions with excellent directionality and ambient effects, like the sounds of chirping crickets in the distance. Action sequences make best use of the back speakers as creatures sometimes convincing fly from the back to the front and all around, but in general, the music and score make the best use of the entire soundfield.

Picking up a few years after the events of the first movie, 'Hotel Transylvania 2' follows Adam Sandler's Dracula as overprotective grandfather to Mavis and Johnny's son, Dennis. Similar to its predecessor, the CG-animated family feature will have the little tykes screaming with laughter while parents are mildly amused by the drawn-out silliness and the heartwarming drama. The Blu-ray arrives with reference-quality video and an excellent audio presentation. With a nice collection of bonus material, the overall package makes a nice purchase for the whole family.